The December cover of Vogue, featuring Harry Styles, has sent many right wing ideologues into a tizzy, and several gender conformists have called him out for breaking the gender binary. Here's why 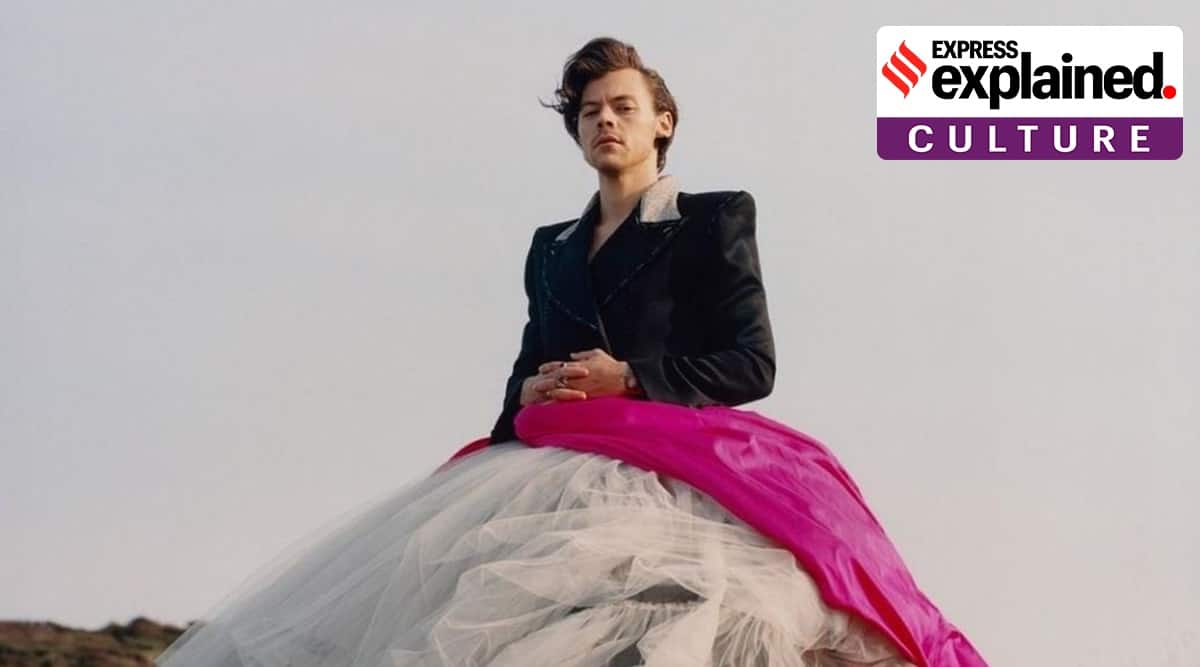 Singer, songwriter and music composer Harry Styles has once again made history, but this time it’s not about his bestselling albums. The British pop-star became the first ever solo male model to appear on the cover of Vogue, the Bible for everything fashion. That’s accomplishment enough, but added to the achievement was the fact that he was wearing a ballgown. Yes, the 26-year-old music phenomenon was wearing a lilac blue Gucci ballgown, which had black lace trimmings, and the look was topped off with a black tuxedo jacket, all created by the creative director of Gucci, Alessandro Michele. The photoshoot had pictures that ranged from Styles wearing nothing but a skirt; a kilt; a Victorian crinoline and a lone trench coat among other things.

The cover of Vogue has sent many right wing ideologues into a tizzy, and many gender conformists have called him out for breaking the gender binary.

The Indian Express breaks down the controversy, and also looks at the history of men wearing what is now called ‘women’s garb’.

Harry Styles’ statement dress on the cover of Vogue made people like Ben Shapiro, a conservative American political commentator, supremely angry. Wrote Shapiro on Twitter in response to the Vogue cover: “This is perfectly obvious. Anyone who pretends that it is not a referendum on masculinity for men to don floofy dresses is treating you as a full-on idiot.”

Shapiro was echoing the sentiments of Candace Owens, an American conservative author, commentator, and political activist, who had started the thread against Styles. “There is no society that can survive without strong men. The East knows this. In the west, the steady feminization of our men at the same time that Marxism is being taught to our children is not a coincidence. It is an outright attack. Bring back manly men.”

The tweet was met with severe backlash as gender activists and the global LGBTQ+ community voiced their anger at the distasteful remark. Many called out Owens and Shapiro on their anti-LGBTQ stance. The Twitter war turned nasty when actor Elijah Woods — best known for playing Frodo in the Lord of the Rings movie trilogy — commented, “I think you’ve missed the definition of what a man is. masculinity alone does not make a man.” 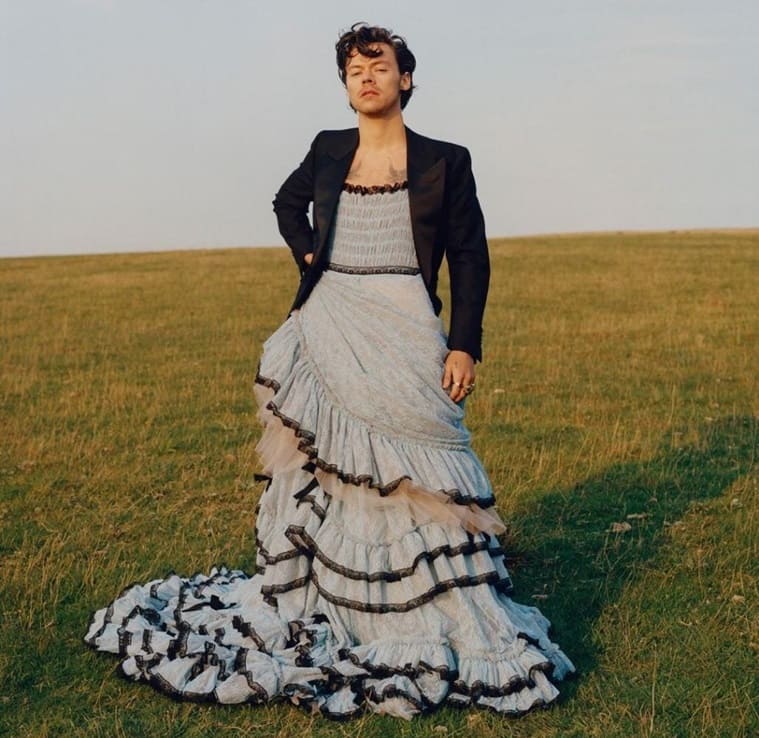 People like Olivia Wilde, Zach Braff and Jameela Jamil, on the other hand, came out in support of the former One Direction member. 📣 Express Explained is now on Telegram

The photo shoot with Styles was hailed by many as a step in the direction to break preexisting gender conventions. Actor Zach Braff wrote on his Twitter along with a picture of Styles: “Our whole lives boys and men are told we need to be manly. Life is short. Be whatever the f*%k you want to be.”

In a post #metoo world when toxic masculinity is being called out more and more, defying gender norms is seen as a welcome way to open conversations and usher in a new world which is accepting of one and all.

Styles always had a penchant for defying tradition. Even during his One Direction days, he would wear floral blouses, sheer shirts and skinny jeans and boots with heels — most of which are associated with women’s fashion. His image was often termed as “fashion forward”. He also used a lot of the colour pink, again something which is often associated with the feminine spectrum. He has also been seen sporting a string of pearls on occasion. 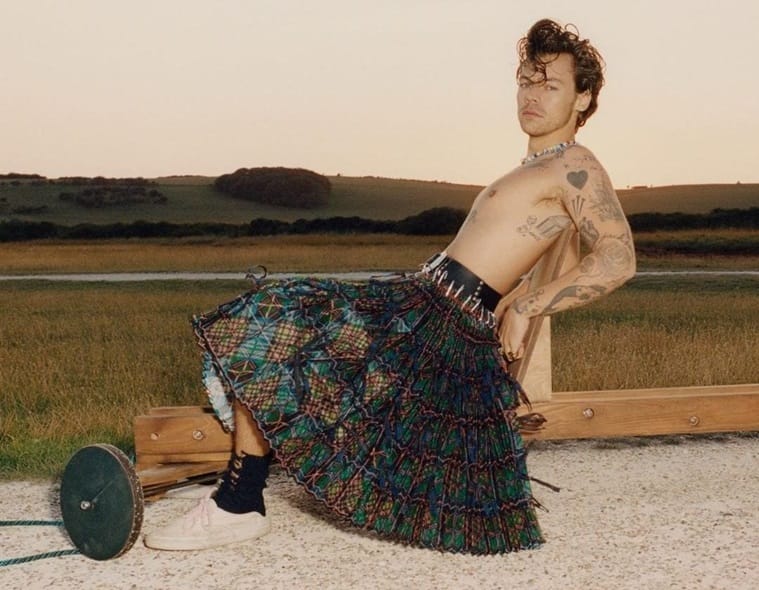 While currently Styles might be grabbing headlines for wearing a dress, historically we have had many instances when clothing was pretty gender ambiguous. The kilt worn in the Scottish Highlands by men and boys is essentially a knee-length skirt, which has pleats at the back. The 16th century version could also be draped around one’s torso as a cloak, while the modern version was a much shorter one.

In India, the dhoti, a drape, was worn by both men and women. The women had a longer cloth that served to cover the torso, while the men would only drape it around the waist, covering only their legs.

In Ancient Greece, men and women wore T-shaped tunics, called Chitons. Kingdoms of Mesopotamia and Babylonia, too, have evidence of men wrapping fringed cloth around their waists.

Henry VIII, during the Tudor era, wore a long jerkin, which was a tunic of sorts, cut low to the waist to reveal the ornate doublet worn underneath, and had a full skirt that went till the knees.

The longyi, lungi, or mundu is a common item of clothing worn in today’s south-east Asia, right from Southern India to Myanmar and Sri Lanka.

In sub-saharan Africa a skirt like sarong is worn by men called Kanga. 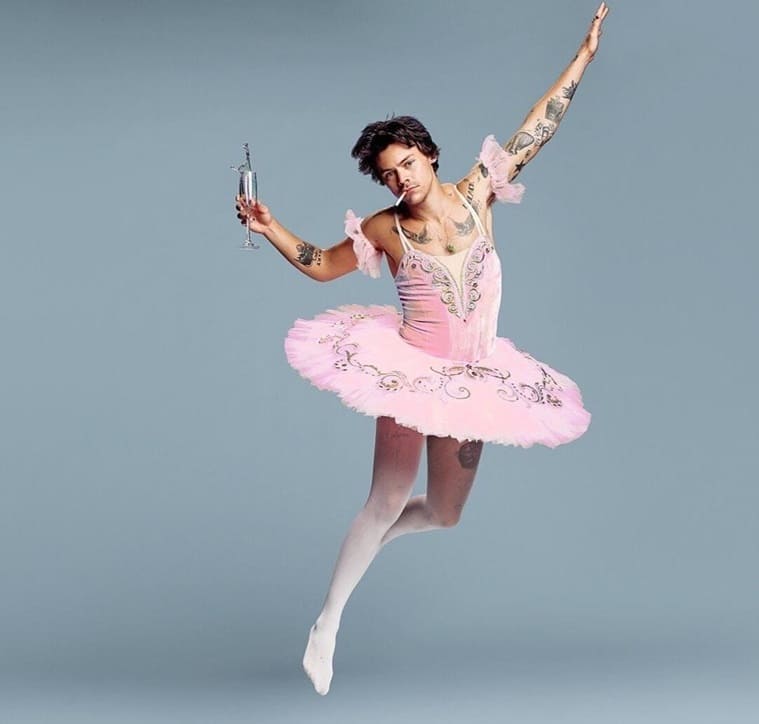 The Mecca of MET

The annual MET Gala hosted by the Metropolitan Museum of Art’s Costume Institute in New York City, single-handedly breaks fashion norms. It’s on the very lush red carpet of the 2019 MET Gala that we saw Billy Porter wear a ‘tuxedo-gown’, and that;s where we met Styles again wearing his favourite Gucci, but this time he wore a delicate, sheer, black blouse with tailored trousers, and yes there were heels. Actor Michal Urie paired up a pink frothy dress and a pinstriped suit to create an outfit that was defying gender norms in fashion.

On the Indian ramp

Indian designers like Rimzim Dadu and label HUEMN have often championed the cause of non-gender conformist clothing. At the 2018 grand finale of the FDCI India Fashion Week, which celebrated the decriminalisation of Section 377, we saw a male model wearing a deconstructed saree designed by Rimzim Dadu. The label Bobo Calcutta, too, has been doing unisexual and androgynous clothing.