The robot is designed to move around the home and keep a check on pets, and detect something unusual in the absence of the owner. 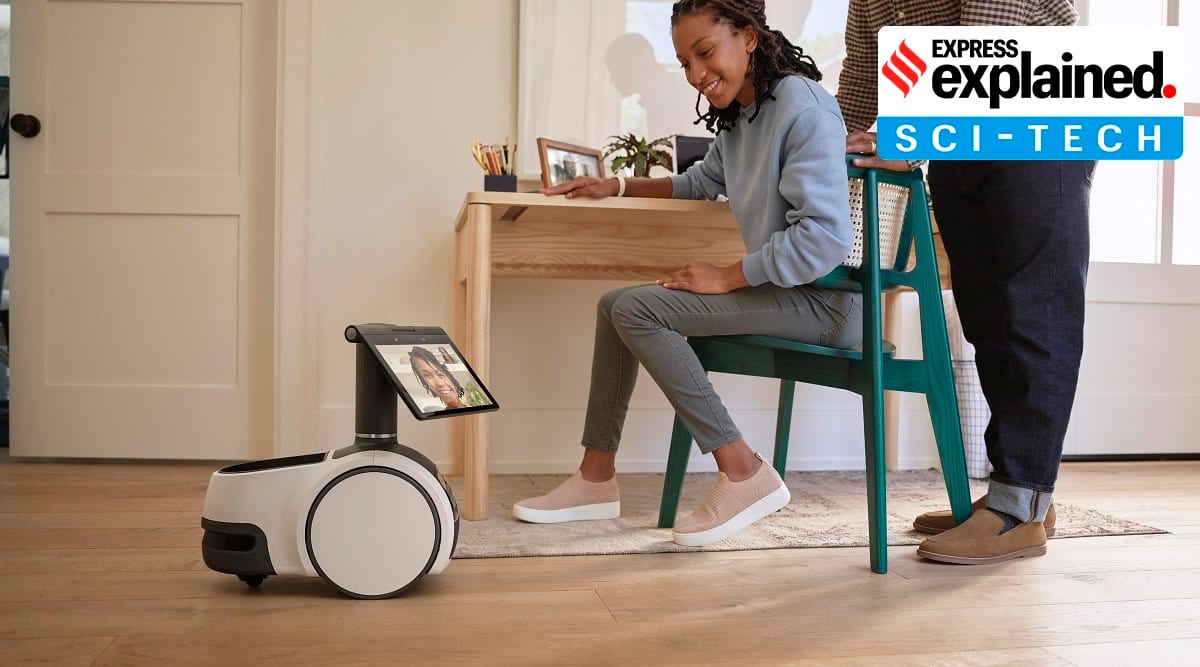 Amazon last week announced many new products including a “home robot” named Astro. The robot has cartoony-eyes on a tablet-like touchscreen and comes equipped with a periscope camera and microphone, and can autonomously navigate your house to keep a tab on security or follow you around while you’re on a video call.

Astro is the most ambitious product Amazon has made after its Echo smart speaker that helped the company create an ecosystem of household products. Amazon is calling the device an engineering breakthrough, but the e-commerce giant’s big bet on turning science-fiction to reality has invited privacy concerns, raising alarm bells over putting a 24×7 surveillance robot at home. We explain why Amazon’s home robot has raked up a controversy even before its being made available and what it tells about the future of home robots.

Astro weighs about 20 pounds and is two feet tall, essentially a robot dog on wheels. Astro also happens to be the name of the non-robotic dog in The Jetsons. The robot is designed to move around the home and keep a check on pets, and detect something unusual in the absence of the owner. It comes with a “periscope” camera that pops up from its head and can be used to keep an eye on your home. Astro is basically a combination of the Echo Show and sophisticated Ring security camera integrated into one single device. The device captures live videos, recognises faces, plays music or videos, and delivers a beer across the home. It’s an innovative product that takes advantage of Amazon’s expertise in artificial intelligence and uses cameras and sensors to see and follow you around the home.

“Astro’s personality not only helps it communicate intent and offer delightful experiences, but it also evokes emotions like empathy when people use the device,” Charlie Tritschler, Vice-President of Products at Amazon, said in a blog post while introducing Astro which has round digital eyes giving it a human-like feel to it.

But Astro is a surveillance machine

Amazon claims privacy is key to Astro and how it designed the home robot. But what’s worrying many is the amount of data Amazon gets to fetch with the Astro, giving the company easy access to the household, going one step beyond Alexa which has its ears open all the time.

Having a security camera stationed at one corner of a room is less problematic than one on wheels. And, this is a robot that can recognise faces of people and analyse them until it figures out if it’s a family member or an outsider.

This suddenly opens up a lot of issues. Yes, you can turn off the robot’s camera and microphones with a single button; plus, Astro stores face data locally rather than in the cloud, but it is still a privacy concern as with any internet-connected device.

Motherboard, a tech news site, published leaked documents that reveal Amazon’s Astro isn’t ready for prime time. Some developers who worked on the project anonymously told the publication that there were issues with the robot falling to recognise people and the device does not handle stairs well. One person called Astro a “disaster that’s not ready for release” and the robot is a “privacy nightmare.”

Another reason why Astro is being seen from a negative lens is Amazon’s past. Two years back, the company had to stop selling its racially-biased Rekognition facial recognition system to law enforcement after a lot of pressure from civil rights advocates. The debate over facial recognition technology – still unregulated in the US — started a whole new conversation about the bias and inaccuracy when these tools are developed. Ring, which is owned by Amazon, was in the news for facing a class action lawsuit after users alleged that smart cameras were hacked and used to harass them.

There could also be why the Alexa-powered robot is a “Day 1 Edition” product, meaning Amazon will ask people to sign up and then invite them to order the robot. The $1000 (it will retail for $1500 after the invitation-purchasing window is over) robot won’t be sold on the company’s e-commerce platform, limiting its availability to a handful of early users. The device will go on sale later this year but has no exact launch date yet.

Regardless of how you perceive Astro and whether or not privacy concerns matter to you, the truth is that Amazon has successfully made its presence felt in consumer’s homes through “experimental” products, be it the Echo smart speaker or the Kindle ebook reader. That strategy has worked in favour of Amazon and to a certain extent makes the tech giant unique and different. But Amazon’s next frontier could be to make its ecosystem of home products stronger where there is less competition from established players like Apple and Samsung. The Astro fits in that space well, even if it does not look or behave like a conventional robot.

Amazon has a deep relationship with everyday consumers and once again it is using voice assistant and artificial intelligence as the basis to design Astro. Astro is primed to be a home security device first and a cute little robot second. For example, the robot can look after the home when you are asleep or out of home and send you live feed on your phone and keep tab on the elderly or pets.

What works in favour of Amazon is that Astro is not purposeless, unlike home robots of the past. Several attempts have been made to sell home robots to mainstream consumers but the plan never worked or in some cases the devices were limited in capabilities. Sony first started selling its Aibo lineup in 1999, and although there is a cult following for the company’s robo dogs in Japan, it hasn’t been an easy ride for the Japanese giant to sell its robotic pets to a broad consumer base. The Walkman-maker had to cancel the original Aibo series in 2006 due to financial wooes, and in 2018 it revived its autonomous robot Aibo targeting elderly. The $2899 robo dog comes with artificial intelligence and facial-recognition technology and can develop its own personality over time. It continues to have a niche appeal, though the new Aibo has been well received.

Developing a home robot is not only time consuming but there are also risks involved. Softbank earlier this year “suspended” the production of Pepper, one of the first humanoid robots able to “read” emotions. Jibo was started an Indiegogo project and pitched as “the world’s first social robot for the home,” but met with a similar fate as the idea never caught on. Jibo was founded by MIT robotics professor Cynthia Breazeal in 2012. After years of development, the device went on sale in 2017, but its steep price of $900 and limited appeal worked against the social robot. Parent company Jibo, Inc. sold its IP and assets to an investment management firm after laying off most employees.