Coronavirus in India: There are many questions and not many good answers. The very different trajectories in different states just shows there is still a lot that we do not know about the nature and behaviour of this virus. The rising coronavirus cases in Maharashtra is not the first time that a state has seen a second wave of infections in this epidemic. Delhi has had three distinct waves, each with a bigger peak than the previous one. Punjab and Madhya Pradesh have seen multiple periods of growth and slowdown of infections.

But this spike is different

The current situation in Maharashtra and a few other states seems different for several reasons.

Unlike the previous instances, this resurgence in infections has come after a prolonged and sustained slowdown that continued for almost five months. Except Kerala, almost every other state saw their numbers decline considerably during this period.

No country in the world has seen such a prolonged slowdown — the epidemic has been quiet for two to three months at best. In that sense, the surge happening in India right now is somewhat unique, even though experts say this is not completely unusual in an epidemic — a resurgence can take place even after a year.

More crucial is the fact that this surge is happening in Maharashtra, the worst hit state in the country. With more than 21 lakh confirmed infections, Maharashtra accounts for a little less than 20% of India’s caseload. The epidemic trajectory in Maharashtra has almost exactly mirrored that of India as a whole. Both have been near-smooth bell-shaped curves until now.

The disproportionate influence that Maharashtra has on India’s numbers means the increase here is likely to change India’s curve as well. This is already beginning to happen, even though it is not very noticeable yet. The multiple surges in Delhi, or some other states, could never be noticed in India’s trajectory.

Discounting a marginal decline on Sunday, the number of new coronavirus cases detected across the country has risen every day in the last one week, something that has happened for the first time since the middle of September. Active cases have begun to rise again. This had not happened even when Kerala was reporting very high numbers continuously for more than two months.

It’s not the new variants, though

There is no evidence as of now to suggest that the current surge is being powered by the new variants of the virus that have emerged in other countries. Though the gene analysis of the virus circulating in the Indian population has been much below desired levels, some targeted genome sequencing to specifically look for these new variants has so far detected only a few isolated cases. This does not, however, mean that these new, more virulent and dangerous strains cannot start infecting people in India in the future. 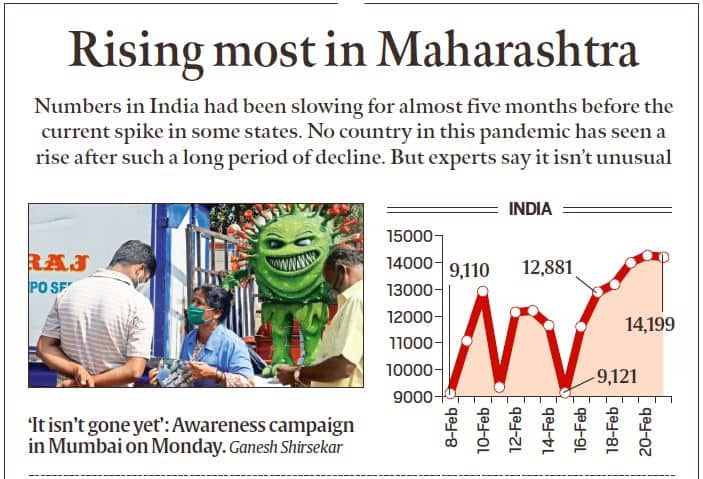 The surge in Maharashtra certainly indicates that the talk of infection rates in India having attained herd immunity levels had been premature. The spectacular fall in numbers from October onward had led many to believe, even in the absence of any corroborative evidence from serosurveys, that a sufficiently large proportion of the population had been infected for the effects of herd immunity to start playing out. The spread of an epidemic slows considerably if the number of uninfected people who can potentially be infected declines in a population.

No good explanations either way

The talk about herd immunity was mainly the result of the fact that there wasn’t a good explanation — there still isn’t — for the sustained decline in numbers for a prolonged period.

Testing had not dropped significantly, lockdown restrictions had been lifted, festivals and elections had seen people gathering in large numbers, political activities had resumed, a large farmers’ protest had been going on, and general levels of adherence to physical distancing and masking were poor.

But just like the decline, the new rise in numbers in Maharashtra and some other states isn’t understood either. The reasons being offered — resumption of normal activities, restarting of local train services in Mumbai, gram panchayat elections, weddings — are not unique to Maharashtra.

Consider: Bihar saw an election campaign when the epidemic was still raging. Assam and West Bengal are seeing political rallies similar to those in pre-Covid times. Still, Assam has long been reporting new cases in only double digits — on some days even in single digits — and the numbers in West Bengal have been declining steadily, like in most parts of the country. And it’s not that these states have made some extraordinary interventions that Maharashtra or Kerala haven’t.

The very different trajectories in different states just shows there is still a lot that we do not know about the nature and behaviour of this virus.