After studying at the Government School in Aligarh, Raja Mahendra Pratap went to the Muhammadan Anglo-Oriental College in Aligarh, which later came to be called Aligarh Muslim University. Two years after Uttar Pradesh Chief Minister Yogi Adityanath said Raja Mahendra Pratap Singh had not received the recognition due to him for having donated land for Aligarh Muslim University (AMU), and promised to construct a university in the same city in his name, Prime Minister Narendra Modi on Tuesday (September 14) laid the foundation stone of the university.

Raja Mahendra Pratap Singh was a freedom fighter, revolutionary, writer, social reformer, and internationalist who entered Lok Sabha as an Independent candidate from Mathura in 1957, in an election in which Atal Bihari Vajpayee of the Bharatiya Jana Sangh came fourth.

Mahendra Pratap established a “Provisional Government of India” in Kabul in the middle of World War I in 1915 and, as the British government targeted him for his activities, based himself in Japan. In 1932, he was nominated for the Nobel Peace Prize.

The Raja finally returned to India a year before Independence, and immediately began work with Mahatma Gandhi. In free India, he diligently pursued his ideal of panchayati raj.

Why is the Jat leader seen by his family and admirers as a much-needed icon of peace in present times? What are his contributions to the promotion of education? What was the nature and basis of his leftist inclinations? And why is he and his legacy being invoked ahead of the Assembly elections due in UP in 2022?

The legacy of Mahendra Pratap Singh

“He was not a political figure. He was more of a reformer who promoted education. He gave his own residence to establish the first technical school of the country. He was well versed in eight different languages, he practised different religions, he founded the world federation, he was nominated for the Nobel Prize, he set up a Provisional Government of India in Afghanistan, but still, very few know about him,” said Charat Pratap Singh, the great grandson of Mahendra Pratap. Charat Pratap Singh said he is the manager of the estate of the late Raja in Hathras and its affairs.

“Now that the government has decided to establish a university after him, Dadaji’s legacy will be known to people. They would like to know about him and his contributions,” Charat Pratap told The Indian Express on Tuesday morning.

Raja Mahendra Pratap Singh was born into the ruling Jat family of Mursan estate in Hathras in 1886. In 1907, the young Raja proceeded on a world tour with his wife, who was Sikh.

On his return, the Raja gave up his own residence in Mathura to be converted into a technical school named Prem Mahavidyalaya in 1909. It is said to have been the country’s first polytechnic.

After studying at the Government School in Aligarh, Raja Mahendra Pratap went to the Muhammadan Anglo-Oriental College in Aligarh, which later came to be called Aligarh Muslim University.

Although he was unable to complete his graduation from the institution, Raja Mahendra Pratap’s name is counted among the prominent alumni of the university.

As prominent notables of the area, Mahendra Pratap’s father and grandfather were close to the educationist and reformer Sir Syed Ahmad Khan, the founder of Aligarh Muslim University. 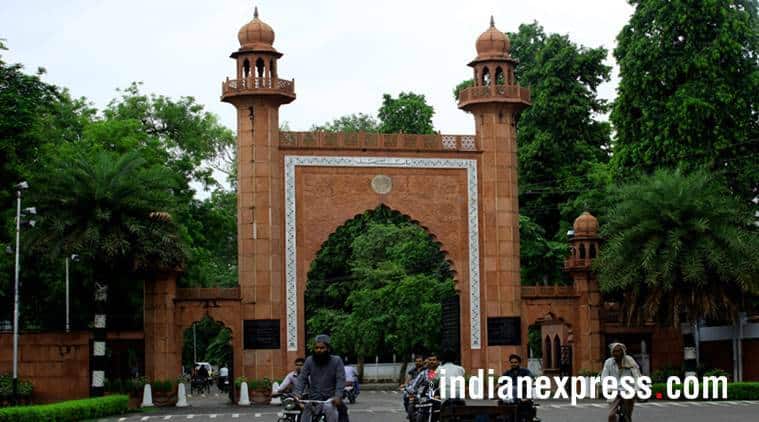 Like many others in the region, the family contributed to Sir Syed’s efforts to set up the university. The family is said to have given land to AMU, some parts of which were donation, while other parts were granted on lease. Raja Mahendra Pratap too, gave land to various educational institutions.

“The family never wanted that AMU should be renamed after him, only that his legacy be publicised and made widely known,” Charat Pratap Singh said.

AMU has agreed to name its City School after Mahendra Pratap, he said. The land for the school had been given on lease by his family in 1929, Charat Pratap said.

Contribution to the Freedom Struggle

Raja Mahendra Pratap Singh is said to have left his estate in 1914 to plunge into India’s struggle for independence. On December 1, 1915, he proclaimed the first Provisional Government of India outside India at the historic Bagh-e-Babur in Kabul. He declared himself president, and his fiery fellow revolutionary Maulana Barkatullah of Bhopal, prime minister, of the Provisional Government.

Mahendra Pratap subsequently travelled to various countries to gather support for the revolutionaries fighting for independence in India. He went to Germany, Japan, and Russia, and met the political leaders of those countries. He is said to have met Vladimir Lenin in 1919, two years after the Bolshevik Revolution.

Nomination for the Nobel Prize for Peace

In 1929, Mahendra Pratap launched the World Federation in Berlin. He was nominated for the 1932 Nobel Peace Prize by the Swedish doctor N A Nilsson, who was a member of the Commission of the Permanent International Peace Bureau.

The nomination described the Raja as a “Hindu patriot”, “editor of the World Federation”, and “unofficial envoy of Afghanistan”. The motivation for the nomination read:

“Pratap gave up his property for educational purposes, and he established a technical college at Brindaban. In 1913 he took part in Gandhi’s campaign in South Africa. He travelled around the world to create awareness about the situation in Afghanistan and India. In 1925 he went on a mission to Tibet and met the Dalai Lama. He was primarily on an unofficial economic mission on behalf of Afghanistan, but he also wanted to expose the British brutalities in India. He called himself the servant of the powerless and weak.”

Charat Pratap Singh said it was “mainly due to his (Mahendra Pratap’s) contribution to the education sector and launching the World Federation that later became the force behind the United Nations, that he was nominated for the Nobel Prize”.

Return to the country and political career in India

After almost 32 years of exile, Mahendra Pratap Singh finally returned to India in 1946.

In 1957, Raja Mahendra Pratap Singh contested the Lok Sabha election from Mathura, and was elected Member of Parliament after he defeated Chaudhary Digambar Singh, the Jat leader of the Congress, and the young Vajpayee. Mahendra Pratap Singh won over 40 per cent of the votes in that election.

Why the interest in Mahendra Pratap’s legacy and work now?

With elections only a few months away, Mahendra Pratap Singh’s family identity as a “Jat king” is of interest to the BJP. The party has lost ground among the Jat farmers of western Uttar Pradesh, who have been protesting for a full year against the farm laws brought by the central government.

By celebrating the legacy of a respected Jat leader and reformer, the BJP hopes to recover the affection of some sections of Jats in the region. The BJP is also seeking to highlight the manner in which earlier governments had “ignored” his contributions to the building of AMU, and to India’s freedom struggle.

Some have argued that the contributions of land by Raja Mahendra Pratap Singh and his son are not very large in the 1,000-plus-acre sprawl of the AMU campus. As the elections come closer, however, such claims and counter-claims can be expected to become only louder.