There is a debate in Tamil Nadu over an alleged attempt to bifurcate the state, after some BJP handles were seen supporting the idea of 'Kongu Nadu'. What is Kongu Nadu, and how did the controversy break? 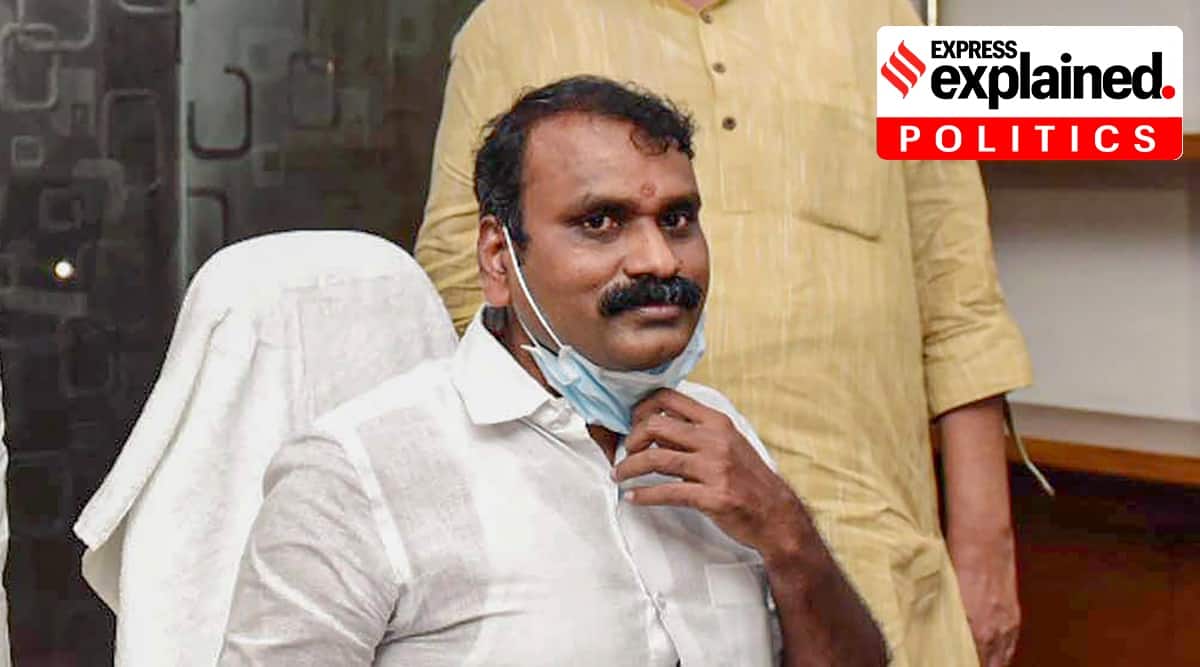 A list of new Union Cabinet ministers issued by the BJP has triggered a debate in political circles in Tamil Nadu, as well as on social media, by referring to ‘Kongu Nadu’, the informal name for a region in the western part of the state. The list mentions new minister L Murugan as hailing from ‘Kongu Nadu’. This has led to allegations that the BJP of trying to bifurcate the state, with the ruling DMK-Congress alliance saying the “agenda” will not succeed.

But where is Kongu Nadu?

‘Kongu Nadu’ is neither a place with a PIN code nor a name given formally to any region. It is a commonly used name for part of western Tamil Nadu.

In Tamil literature, it was referred to as one of the five regions of ancient Tamil Nadu. There were mentions of ‘Kongu Nadu’ in Sangam literature as a separate territory.

In the present state of Tamil Nadu, the term is informally used to refer to a region that includes the districts of Nilgiris, Coimbatore, Tirupur, Erode, Karur, Namakkal and Salem, as well as Oddanchatram and Vedasandur in Dindgul district, and Pappireddipatti in Dharmapuri district. The name derives from Kongu Vellala Gounder, an OBC community with a significant presence in these districts.

The region includes prominent businesses and industrial hubs at Namakkal, Salem, Tirupur and Coimbatore. It has also been considered an AIADMK stronghold in the recent past, and is also where the BJP’s limited influence in the state is concentrated. 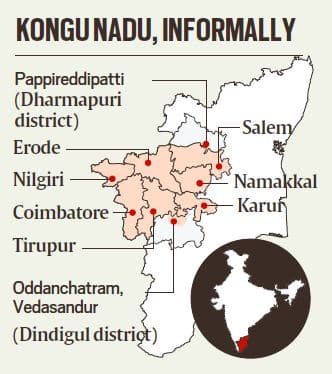 How did the controversy break?

The list released by the BJP profiles every new minister with the names of the place and state he or she comes from, such as minister John Barla from “Jalpaiguri, West Bengal”, and Dr Munjapara Mahendrabhai from “Surendranagar, Gujarat”. It refers to Murugan as being from “Kongu Nadu, Tamil Nadu”.

As social media broke into debate over an alleged attempt to bifurcate the state, some BJP handles were seen supporting the idea of ‘Kongu Nadu’ — in a state where their party has little presence except for their recent seats they won in alliance with the AIADMK.

Is there any ground for the allegations about a planned bifurcation?

Unlike Telangana or Uttarakhand, there has never been a demand or discussions about a separate Kongu Nadu in the modern political history of Tamil Nadu. The debate, therefore, lacks any political or social context. Many, however, see it as a counter from the BJP to the DMK’s assertive stand in using the term Ondriya Arasu (Union government) rather than Madhiya Arasu (central government).

“I do not think there is an immediate plan. They were planting a seed actually, and triggered that debate. Hereafter, the demand for ‘Kongu Nadu’ will not be a new issue,” said a former AIADMK minister. Another AIADMK minister said the idea of ‘Kongu Nadu’ can backfire on the BJP if it pushes it for votes.

In electoral politics, however, it is seen as the only region where the BJP and RSS have something of a presence. Two of the four seats the BJP won in the recent Assembly polls, thanks to the AIADMK alliance, were in western Tamil Nadu.

Has the BJP denied the allegations?

The BJP has indeed denied any move to divide the state. Yet, it has also referred to the bifurcation of Andhra Pradesh and Uttar Pradesh.

“Vallanadu is near my area. Varusanadu is near Theni. Can we make states out of all these Nadu (regions). Why is the DMK afraid of the Kongu Nadu debate? Everything is Tamil Nadu, nothing to worry about,” said BJP Legislature Party leader Nainar Nagendran. “… But at the same time, keep in mind that Andhra Pradesh was divided into two, and UP also. After all, if it is the wish of the people, it would be the responsibility of the government to fulfil it,” he said.

When journalists asked BJP state general secretary Karu Nagarajan whether the Centre plans to bifurcate the state, he said “this is the first stage”. “It has happened like that in other states as well. Telangana is an example. If talking about Ondriya Arasu (Union government) is their wish, it is also the wish of people to call it ‘Kongu Nadu’,” he said.

But Nagarajan later told The Indian Express: “It is a mere social media debate. I am not even sure of the origin of this discussion. Talking about ‘Kongu Nadu’ is like Tamil parties that used to have alliances with UPA and NDA at the Centre now calling it ‘Ondriya Arasu’. There is nothing from the BJP officially. Anyway, the people’s wish would be important in such an issue.”

How seriously have the BJP’s rivals taken this?

Leaders of the ruling alliance have said Tamil Nadu cannot be divided, with the Congress condemning this “agenda of the BJP”.

“Nobody needs to worry about such reports. Tamil Nadu is safe under the government now,” said DMK MP Kanimozhi.

State Congress chief K S Alagiri, too, said it is impossible to divide Tamil Nadu. “If it happens, that will set a precedent and lead to the formation of many such states. Dividing Tamil Nadu is an impossible dream, even if some political parties with vested interests would love to push for it… This agenda of the BJP will not succeed; we strongly condemn it,” Alagiri said.

T T V Dhinakaran, the rebel AIADMK leader who is now heading the Amma Makkal Munnetra Kazhagam (AMMK), said the government should nip in the bud such “mischievous voices”. He noted there was no demand for a new state from any section of the people.

AIADMK K P Munusamy, too, condemned those who are triggering debates about dividing the state.