AB de Villiers has directly influenced three of RCB’s five victories, shellacking 204 runs at a staggering strike rate of 174 runs, the highest among any batsman who has scored more than 200 runs in this edition. 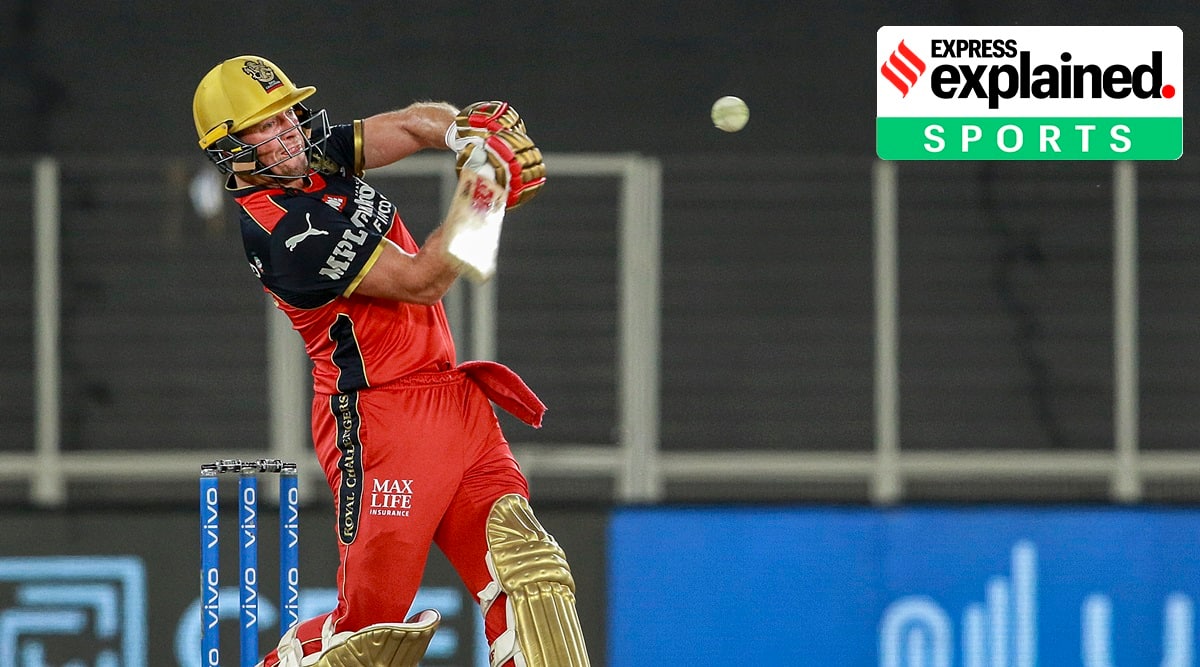 AB de Villiers has not been the 360-degree batsman he could be in this IPL. However, his largely 180 degrees canvas in this edition seems more than adequate to rattle out match-defining efforts. He has directly influenced three of RCB’s five victories, shellacking 204 runs at a staggering strike rate of 174 runs, the highest among any batsman who has scored more than 200 runs in this edition.

How has de Villiers been getting his runs this season?

His hitting arcs this season have been largely conventional. A bulk of his runs have come in front of the square, with a lion’s share of boundaries arriving straight down the ground. Of the 204 runs he has logged in so far this season, only 39 runs were scored behind square on either side of the wicket. When it comes to his boundaries, he has struck only five fours (mostly between point and third man) and a six (a pull) through this region. Through the opposite region, he has belted 13 fours and seven sixes (everything in the arc between extra cover and mid-wicket). Resultantly, he has barely ever attempted a ramp or a scoop, reverse sweep or the paddle variant leave alone execute it. That trademark de Villiers pose of flailing to the off-side and deflecting the ball over the keeper’s head has not been spotted yet in this campaign. There’s time yet, but de Villiers seems to be in a different mood this year. So full is his repertoire that he needn’t necessarily resort to innovation or improvisation. Even with his 180-degree arc, he is a difficult batsman to contain. However, it could be that the strips for this edition have been sluggish, the ball stopping and not quite coming onto the bat to fuel easy stroke-play. Thus, manipulating bowlers’ pace has become difficult. Sure, de Villiers could still pull off the strokes, but there is no need to when he has all the strokes in the world in his kitty, which are risk-averse. Besides, bowlers are looking to take the pace of the ball, and most of these strokes behind the stumps do require a bit of premeditation. Hence, only when the balls are really short, he would unpack his inverted V oeuvre. He would look to either cut or glide the ball if it’s on the offside or pull or hook if the ball veers onto the leg-side. Or it could be just his way to remind that the conventional side of his game could wreak equal havoc, if not more.

So what has he been doing?

He has reduced jumping around in the crease. He wouldn’t shuffle across as often as he did in the past or back away. Rather, he goes slightly back, clears his front leg a bit, opens up his body up and looks to get under the ball so that he could generate blinding power into his shots, and if he’s going aerial the required elevation. This approach naturally predisposes him to hit straight down the ground, even to those balls that he tends to play behind the square in the past. For instance, against Delhi Capitals on Tuesday evening, he crunched a short ball between wide mid-off and deep cover for a four. The gap was minuscule, but the power he imparted was so much that both fielders had little time to react. The power game ensures that even if mistimes the ball, the shots still have enough impetus to clear the ropes. Hitting straight reduces his dismissal prospects too. A few times he stepped out, a couple of strides rather than a full-fledged dance down the track, but only against the spinners. A couple of times, he could not reach the pitch of the ball, but the merry bat-swing provided him with the power to smash the ball into the distant caverns of the stands.

What does this mean to bowlers?

Certainly ominous signs, as his methods are near foolproof and risk-effective. He has eliminated whatever risks that remained in his game. Though his preening and pirouetting was a put-off for the bowlers, they might have sniffed an opportunity to dismiss him (though in reality, he has been exceptionally clinical behind the stumps).

But now he’s not only more difficult to dismiss but also is scoring those runs at the same astonishing lick, and at that stage of the game where it really hurts the bowlers. At the death, when de Villiers winks in his delirious endgame.