Despite high vaccination rates, new cases are rising across Europe. Austria has imposed a lockdown, while Germany has stressed the need for tougher restrictions. A look at trends, and the reasons for the resurgence. Austria re-imposed a national lockdown on Monday, as it continued to register a record number of Covid-19 infections. This is just days after it had announced that Covid-19 vaccination would be made a legal requirement from February next year.

Also on Monday, German chancellor Angela Merkel said tougher restrictions needed to be put in place to restrain the continuing spread of the coronavirus. Like Austria, Germany too is currently going through the worst phase of the pandemic. So are some other European countries such as the Netherlands and Slovakia, which on Monday barred non-vaccinated people from accessing any non-essential stores or shopping malls. Slovakia has also asked people without vaccination not to attend any public event or gatherings, and would need to test themselves at least twice a week even to just get to their work.

Belgium and the United Kingdom are also experiencing a dangerous surge. Together, Europe is currently reporting nearly two-thirds of all new infections worldwide. The World Health Organiaation recently warned that if tougher measures were not put in place immediately, half a million additional deaths could take place by next February.

The current wave of infections in Europe, which is happening despite high vaccination rates in several countries, is being blamed on a variety of factors, a few of which are unique to the region. But it also has lessons for the rest of the world, including India: a prolonged lull, and even high vaccination numbers, are no guarantee against the resurgence of the disease, something that the scientists have been emphasising repeatedly, but is usually ignored by populations eager to get back to normalcy.

A rise in cases in Europe during this time of the year hasn’t come as a big surprise, according to Virander Singh Chauhan, a scientist and former director of the Delhi-based International Centre for Genetic Engineering and Biotechnology. “The onset of winter plays a role, though no one can predict how big or small the surge would be. It is not that this virus spreads faster in winters… there is no evidence for that. But most of the activities happen indoors because of the low temperatures. And that kind of setting is conducive for transmission,” he said.

Even a lockdown, which is used to curb the spread of the virus, forces people to remain indoors. But there is an important difference between this and people staying indoors just because it is winter. During a lockdown, the intermingling of people and the interactions are kept minimal, but people staying indoors to escape the winter cold will interact freely if there is no lockdown, hence the chances of transmission are higher.

In fact, the current resurgence has come just as Europe was slowly opening up after a relatively calm summer. Just this month, for example, the UK hosted the annual climate change conference in Glasgow which saw record participation, even higher than in previous high-profile climate meets in Paris in 2015 or Copenhagen in 2009. Over 30,000 people attended the two-week conference, making it the largest such meeting organised by the UK ever. Although the attendees were being granted entry only after taking a daily test, the conference is reported to have produced several infections; the number was never revealed despite being repeatedly asked for.

The conference also saw large gatherings outside the venue, as NGOs and civil society organisations organised protest marches that are normal during these meetings. Between 50,000 and 100,000 people were reported to have assembled for these protests on multiple occasions.

As of now, the climate meeting is not being blamed for the surge in the UK or elsewhere, but this could change. It is hardly a week since the meeting got over, and it is still time for the cases triggered by the conference to emerge. 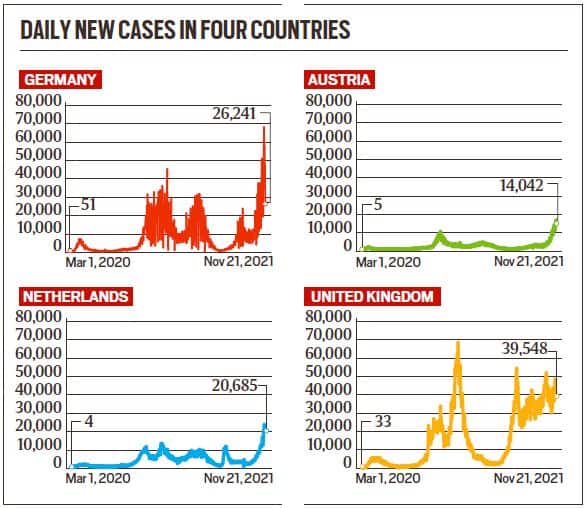 The climate meeting was not the only major gathering that Europe has seen in the last few weeks. Festive gatherings have been happening in several countries, some of which have now been banned by the respective governments.

Scientists have been emphasising for long that none of the current Covid-19 vaccines is a guarantee against infection. They are effective only in preventing or reducing severe disease, hospitalisation and death. This has been evident not just in Europe but also in other regions, such as the United States, which have seen big surges in the last few months. The hospitalisation and death numbers have not risen in same proportion as the case numbers.

But given the numbers being reported from Europe, the proportion of breakthrough infections is also likely to be very high, in comparison, for example, to a country like India. Scientists say that the relatively lower prevalence of the Delta variant in Europe until this summer could have had a role to play. The Delta variant is the most dangerous variant detected until now, and is known to have a much greater ability to bypass the immunity. In Europe, most of the earlier infections were caused by milder variants. The probability of people getting reinfected to Delta is therefore high. In contrast, most of the infections in India during the second wave and after were from the Delta variant.

Most of the countries in Europe have achieved vaccination rates of 60 per cent or higher. In the last couple of months, there has been a pushback from people sceptical of the vaccines. The anti-vaccine population forms a significant proportion in several European countries. Ironically, as cases have risen, both among vaccinated as well as non-vaccinated sections, it has given further ammunition to those against vaccines to point to the ineffectiveness of the vaccines.

It is a vicious cycle, with the anti-vaccine sentiment getting stronger in some places. It has already resulted in protests in many cities, including several days of violent clashes with law enforcement agencies in Brussels. Even in Austria, there is reported to be a strong push-back against the lockdown and mandatory vaccination.