Congress' last victory from the city came in 1984. After that, all its attempts to wrest the seat back from the BJP failed, including the one when they tried their luck by fielding former cricketer Mansoor Ali Khan Pataudi in 1991. A BJP bastion for past 30 years, Bhopal, the capital city of Madhya Pradesh, saw a highly polarised battle between BJP candidate and Malegaon blast accused Sadhvi Pragya Thakur, a Hindu hardliner, and Congress veteran Digvijaya Singh, who the BJP calls a “Hindu-baiter”.

Interestingly, in the 2018 Assembly elections, three Congress legislators, including two Muslims, were elected from Bhopal. In the remaining five seats which the BJP won, there was a slide in the saffron party’s victory margin.

Congress’ last victory from the city came in 1984. After that, all its attempts to wrest the seat back from the BJP failed, including the one when they tried their luck by fielding former cricketer Mansoor Ali Khan Pataudi in 1991 and his wife Sharmila Tagore campaigned for him.

While Digvijaya was not much keen on contesting the elections from Bhopal, a city where he spent ten years as CM between 1993 and 2003, Prime Minister Narendra Modi had said Thakur’s candidacy was a symbolic answer to those who falsely labelled Hindus as terrorists.

Thakur will be seeking to settle old scores with Singh who, she alleged, conspired to get her falsely implicated in the 2008 Malegaon blast case. Immediately after her candidature was announced for the Bhopal seat, she described Singh as an “anti-Hindu leader who called Hindus terrorists”.

The induction of Pragya Singh Thakur into the BJP was also seen as an attempt by the party to consolidate its core Hindutva base by lending its support to a person it believes is the “victim” of the Congress-led UPA’s plot to script a narrative of “Hindu terror.” Thakur, a Malegaon blast accused, was granted bail along with five others in 2017 after NIA dropped all charges against them triggering Opposition allegations that the “Hindu terror” accused were freed because of central government’s pressure.

The BJP soon discovered that it has found not only a mascot but also a loose cannon in Thakur, embarrassing the party brass several times.

Be it her claiming to be one among the people who demolished Babri Masjid on December 6, 1992 and being “proud” of it, or professing to have cursed the Hemant Karkare, the officer investigating Malegaon blast case, leading to his death in Mumbai attacks, Thakur has been served multiple EC notices for violating Model Code of Conduct.

Thakur even went on to term Mahatma Gandhi’s assassin Nathuram Godse a “patriot”, prompting BJP to distance itself from the controversy. The saffron party itself slapped a show-cause notice on her and Prime Minister Narendra Modi said he would never forgive Thakur for the remarks. 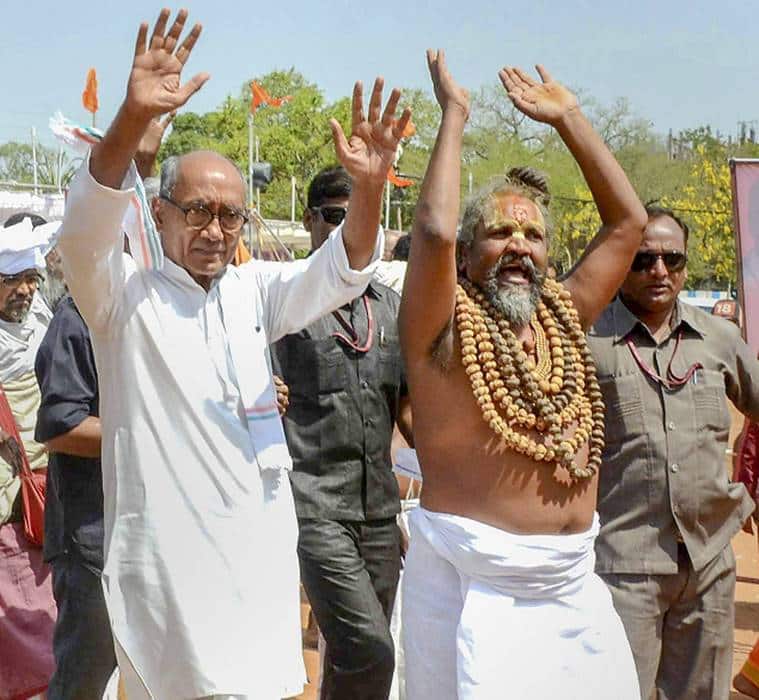 On the other hand, Singh has tried to reinvent himself as a born-again Hindu. He undertook the 3,300-km Narmada Parikrama, where he circumambulated the river between late 2017 and early 2018. This in a way helped him to garner the support of over 7,000 sadhus who campaigned for Digvijaya under the leadership of Computer Baba alias Namdev Tyagi. Some saw all these efforts as his attempt to shed the anti-Hindu image thrust on him by the BJP while some read in it his intention to return to active politics in his home state.