The AIADMK, which had teamed up with BJP, OBC-Vanniyar party PMK and Captain Vijayakanth’s MDMK, which won 37 out of 39 seats in 2014, won a solitary seat. 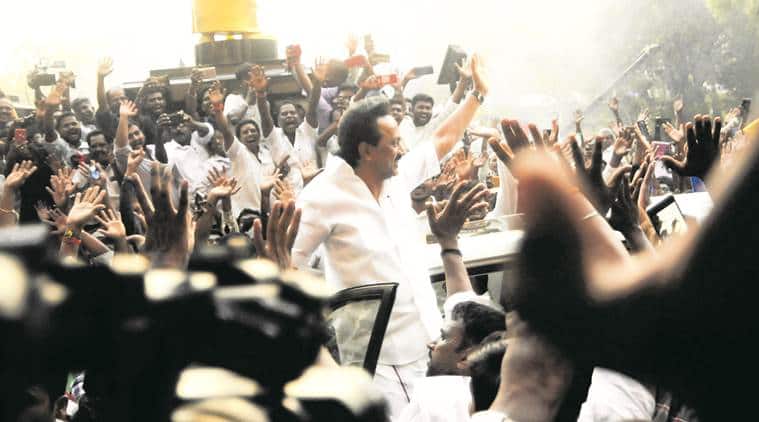 The DMK-led opposition alliance in Tamil Nadu swept the Lok Sabha polls, winning 37 of 39 seats, including the solitary Puducherry seat, as an anti-BJP mood seemed to prevail in the state, where demonetisation, GST woes and Centrally-funded projects and schemes were big issues. This was in contrast to the Narendra Modi wave in rest of the country.

The AIADMK, which had teamed up with BJP, OBC-Vanniyar party PMK and Captain Vijayakanth’s MDMK, which won 37 out of 39 seats in 2014, won a solitary seat. The BJP, which had won from Kanyakumari in 2014, drew a blank this time.

The DMK’s victory gave allies CPI(M) and CPI also two seats each. Dalit party VCK also seemed on way to bag a couple, with party chief Thol Thirumavalavan enjoying a thin lead over his AIADMK rival on Chidambaram seat. Caste polarisation expected through the alliance of PMK and speculated influence of the AIADMK among powerful OBC communities such as Gounders and Thevars proved wrong as the DMK alliance won several such strongholds — Salem, the native place of Chief Minister Edappadi K Palaniswami, and Dharmapuri, a PMK stronghold, among others.

The DMK’s sweep in the Lok Sabha polls was not only a personal victory for party chief M K Stalin after the death of his father and party patriarch M Karunanidhi, but also marks his emergence as a prominent regional leader from South India. This is significant since two prominent anti-NDA leaders in the region – Kerala CM Pinarayi Vijayan and outgoing Andhra Pradesh CM N Chandrababu Naidu – suffered massive defeats in their states.

The success also comes after a long dry spell, during which DMK tasted defeat in successive Assembly elections in 2011 and 2016, and drew a blank in 2014 Lok Sabha polls.

As the results emerged on Thursday, Stalin chose to stay away from early comments. Top DMK leaders also did not comment about the victory.

The Modi wave across the rest of India had no impact in Tamil Nadu. While the DMK swept the Lok Sabha polls in Tamil Nadu, the AIADMK, a BJP ally, just about managed to save face in the Assembly bypolls. Nationally, while the Opposition parties failed to capitalise on the impacts of demonetisation, GST and other central policies, the DMK used these to its advantage in the state. DMK president M K Stalin put up a strong opposition against the AIADMK alliance, underlining his role as a strong regional leader. On the other hand, both TTV Dhinakaran’s Amma Makkal Munnetra Kazhagam and actor Kamal Haasan’s Makkal Needhi Maiam failed to make a mark.

DMK veterans who had lost in 2014, after top party leaders were accused of corruption during the UPA-II regime, managed to make a comeback – A Raja, Dayanidhi Maran, and others such as T R Baalu and Kanimozhi, party chief M K Stalin’s stepsister who faced an election for the first time, among others.

A senior DMK leader said the massive victory in Lok Sabha and a decent performance in Assembly bypolls will help the party in the upcoming local body and Assembly polls. Another former minister said the presence of smaller parties such as T T V Dhinakaran’s AMMK and Kamal Haasan’s MNM, which were expected to cut into DMK votes, as they also banked on the anti-AIADMK and anti-BJP sentiments, in fact impacted the AIADMK.