On Wednesday, G-23 members — Kapil Sibal and Ghulam Nabi Azad — had expressed concerns over what they called "the continuing drift in the party" amid a spate of defections from the party and turmoil in many state units including Punjab. 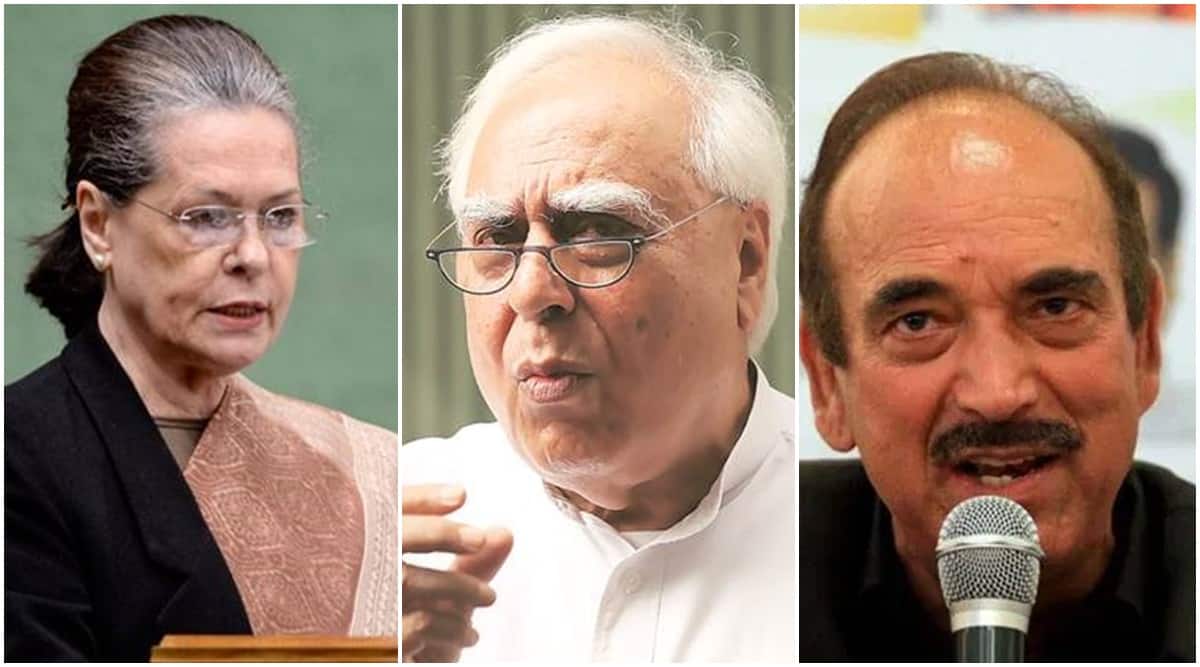 A day after some senior leaders demanded a meeting in the wake of the ongoing Punjab crisis and high-profile exits, the party Thursday said the Congress Working Committee (CWC) will meet “very soon”.

On Wednesday, G-23 members — Kapil Sibal and Ghulam Nabi Azad — had expressed concerns over what they called “the continuing drift in the party” amid a spate of defections from the party and turmoil in many state units including Punjab. They had also demanded that a meeting of the CWC be convened immediately to discuss the internal crisis.

Following this, later on Wednesday evening, Congress workers were seen protesting outside Sibal’s house shouting slogans of “Gaddaron, party chhoro (traitors leave the party)”. The protests, meanwhile, invited angry reactions from several senior leaders including former finance minister P Chidambaram, who in a tweet, said he feels helpless when meaningful conversations cannot be started within party forums. He added that keeping silence was the only option left.

At a press conference on Wednesday, Sibal raised questions on the decision-making process in the party in the absence of a regular president, and demanded dialogue where all senior leaders would be heard. Underlining that the Congress needed to ask itself why leaders were leaving it, Sibal said: “In our party, at the moment, there is no president, so we don’t know who is taking these decisions. We know and yet we don’t know.”

Shortly after, Azad, in a letter to Sonia Gandhi, demanded a meeting of the CWC. He added that the party should welcome suggestions and not suppress them.

Hitting back at the two G-23 members (the group that wrote to Sonia Gandhi demanding sweeping changes in the party structure), Surjewala had said that “every Congressman and woman must also seriously introspect whether by their words and actions they are attempting to weaken the Congress in the times of crisis.”

Several Congress leaders of the ‘Group of 23’ strongly condemned the attack on their colleague Sibal’s house and termed it as “orchestrated hooliganism”. Former leader of Opposition in Rajya Sabha Azad said: “He (Sibal) is a loyal Congressman fighting for the party both inside and outside Parliament. Any suggestion from any quarter should be welcomed instead of suppressing, hooliganism is unacceptable.”

Senior leader Anand Sharma expressed disgust over the conduct of the party workers and asked AICC chief Sonia Gandhi to take strong action against those involved.

“Shocked and disgusted to hear the news of attack and hooliganism at Kapil Sibal’s house. This deplorable action brings disrepute to the party and needs to be strongly condemned,” Sharma said in a series of tweets. He asserted that Congress has a history of upholding freedom of expression. Those responsible must be identified and disciplined, Sharma said. “Urging Congress president Smt Sonia Gandhi to take cognisance and strong action,” he said in a tweet.

Earlier in the day, former Punjab CM Captain Amarinder Singh also condemned the attack on Kapil Sibal’s house by Congress workers. “This happened only because he had chosen to express views that were not palatable to the party leadership,” said Singh.

Terming the senior Congressmen as the “thinkers”, who were critical to the future of the party, Amarinder Singh said the younger leadership should be promoted to implement the plans, which the senior leaders are best equipped to formulate. Unfortunately, the seniors were being completely sidelined, he said, adding this was not good for the party.

Former Haryana chief minister Bhupinder Singh Hooda said, “Orchestrated hooliganism outside Kapil Sibal’s residence last night is not the culture of the Congress.” “If one has any difference of views, the same should be brought up and discussed at party forum,” he said on Twitter.

Congress MP from Punjab, Manish Tewari, also condemned the protests. “Those who masterminded the assault must bear in mind that he fights for @INCIndia both inside and outside courts of law. You may find his views uncomfortable but that cannot be a license for violence,” Tewari, who is a part of G-23, said.

Responding to Tewari’s tweet, Shashi Tharoor, who was also part of the leaders who wrote to Sonia Gandhi last year, tweeted, “That is shameful. We all know @KapilSibal as a true Congressman who has fought multiple cases in court for @INCIndia.”