China on Friday announced sanctions on US House Speaker Nancy Pelosi and her immediate family members for her visit to Taiwan this week, disregarding the strident warnings from Beijing, asserting that it violated China’s sovereignty and the “One China policy”. 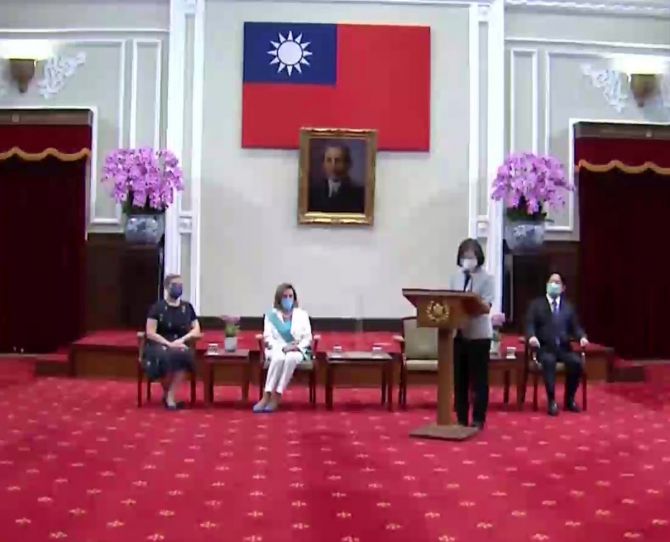 The Chinese foreign ministry, which criticised her visit and lodged stern protests with the US by summoning its ambassador to China Chris Burns, issued a statement on Friday imposing sanctions against Pelosi and her family.

”In disregard of China’s grave concerns and firm opposition, Speaker of the US House of Representatives Nancy Pelosi insisted on visiting China’s Taiwan region,” the statement said.

”This constitutes gross interference in China’s internal affairs. It gravely undermines China’s sovereignty and territorial integrity, seriously tramples on the one-China principle, and severely threatens peace and stability across the Taiwan Strait,” it said.

”In response to Pelosi’s egregious provocation, China decides to adopt sanctions on Pelosi and her immediate family members in accordance with relevant laws of the People’s Republic of China,” it added.

The sanctions against Pelosi were regarded as symbolic and it bans her and her family members from travelling to China.

Earlier, China had imposed sanctions against 28 former Trump administration officials, including the then US Secretary of State Mike Pompeo.

China’s action against Pelosi came amid rare vocal criticism by the Chinese, especially in the local media about the government’s failure to stop Pelosi’s visit to Taiwan and her talks with the island’s top leadership on Wednesday.

Pelosi’s visit was regarded as a setback for the image of Chinese President Xi Jinping, who is widely expected to get an unprecedented third-five-year term, unlike his predecessors.

He is expected to be endorsed in the once-in-a-five-year Congress of the ruling Communist Party of China in the next few months.

Besides the diplomatic offensive against Pelosi, China has announced four-day military drills since Thursday in which the Chinese military fired ballistic missiles into the Taiwan Strait in a major show of strength.

Beijing also pressed its aircraft carrier group which included a nuclear submarine into the drills.

”All the missiles hit the target accurately, testing the precision strike and area denial capabilities. The entire live ammunition launch training mission has been successfully completed, and the relevant sea and airspace control has been lifted,” the PLA statement said.

Taiwan has confirmed that the PLA has launched several Dongfeng tactical ballistic missiles capable of flying up to 500km into the northeast and southwest waters of the island on Thursday afternoon, a day after Pelosi left Taiwan.

Taiwan also cancelled airline flights on Thursday as the Chinese navy fired artillery near the island.  In Tokyo, where Pelosi is winding up her Asia trip, she said China cannot stop US officials from visiting Taiwan.

US Secretary of State Antony Blinken criticised the Chinese military drills saying that the firing of missiles around Taiwan was a disproportionate, significant, and unjustified escalation and the United States had made it repeatedly clear to China that it was not seeking a crisis.

Blinken told a news conference on the sidelines of the ASEAN Regional Forum on Friday that the United States would not be provoked by China and Washington was seriously concerned, adding, ”There was no possible justification for what they have done,” the Hong Kong-based South China Morning Post reported.

In Beijing, Chinese foreign ministry spokesperson Hua Chunying denounced Pelosi’s statement after her visit to Taiwan, in which she said that the “US stands with Taiwan.”

”Just look at Iraq, Syria, Libya, and Afghanistan, and also look at the people responsible for what Pelosi called ”a beautiful sight to behold” in Hong Kong and the ”Hong Kong independence” separatists. See what has become of them?” Hua added.