‘What the UP administration wanted was political mileage, and they also had the silent approval from the central government.’

It has been a year since Siddique Kappan, a journalist from Kerala, has been languishing in a prison in Uttar Pradesh.

Kappen was travelling to Hathras to report the brutal rape of a Dalit girl, but he did not reach his destination.

The UP police arrested Kappan along with the three other young men, who were members of the Popular Front of India, a Muslim organisation based out of Kerala, in Mathura, and charged them under Section 17 of the dreaded Unlawful Activities (Prevention) Act (UAPA).

A journalist who was on his way to report a story suddenly became a terrorist!

The only journalistic organisation that has been fighting relentlessly for Kappan’s release is the Kerala Union of Working Journalists.

“We did not get any proper response from the Centre though this involves a journalist and human rights violation against him,” K P Reji, president, Kerala Union of Working Journalists, tells Rediff.com‘s Shobha Warrier.

The first of a two-part interview:

It has been one year since Mr Kappan is in the UP police’s custody. At that time, his wife Raihanah was hopeful that he would be out on bail in a month. What is the Kerala Union of Working Journalists’s plan of action now?

From the time Kappan was arrested by the UP police at the toll plaza in Mathura, we at KUWJ have been working to get his release.

Though he was arrested in the afternoon or so, the news came out only by evening.

That night itself, the union held an urgent meeting, and we thought Kappan being a journalist, with the intervention of people at the state and national level, he would be out soon.

At that time, we were not aware of the state police had charged him under UAPA.

Did you not expect a situation like this then?

Absolutely not. That night itself, we had sent representations to various government authorities including the UP chief minister.

Though we did not expect a situation like this, the state where he was arrested being UP, we were aware that it would not be easy.

That’s why we decided to send representations to the Kerala chief minister, the Kerala police chief and all the MPs from Kerala.

Through the Delhi unit of the KUWJ, where Kappan was the secretary, we decided to file a habeas corpus petition in the Supreme Court on the second day.

Kapil Sibal appeared for us at the court.

We were in contact with all the MPs from Kerala.

Kerala has a central minister (Union Minister of State for External Affairs V Muraleedharan). What was the response of the MPs including the minister?

We have to admit that all the Kerala MPs intervened, and even wrote letters to the prime minister.

We spoke to the BJP state president and even V Muraleedharan, the minister.

As far as the BJP leaders were concerned, they did not write any letters or made any public statements though they were sympathetic when we spoke to them personally.

Because of the limitations they had, nobody came forward to help us openly.

Of course, this was after they learnt that the UP police had charged UAPA on Kappan. 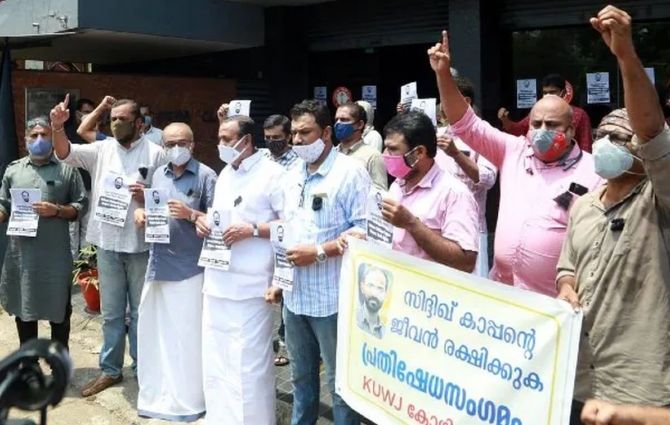 So, UAPA and the alleged PFI connection were the reasons for the reluctance on the part of the political leaders…

Exactly. For the UP police, these are the two selling points.

What the UP administration wanted was political mileage, and they also had the silent approval from the central government.

Such a situation prevented the BJP MPs from Kerala in helping us openly.

You mean, the UP administration had the approval from the central government to go ahead with the case.

That’s what we feel. If not, the case would not have reached this level. There is nothing that shows it is otherwise.

We also did not get any proper response from the Centre though this involves a journalist and human rights violation against him.

Do you think Kappan accidentally became a victim, or was it a planned one?

I don’t think it was planned.

What had happened at Hathras (the rape) had become a burning issue at that time though they tried their best to divert the attention.

That was when they accidentally got Kappan, and they used it judiciously to their favour.

When they saw his name and found out where he had worked earlier (one of which was a magazine run by the PFI), they might have decided to use it to their advantage.

Do you think Kappan being a Muslim from Kerala worked against him?

True. How many people remember or talk about the Hathras incident? Everybody has forgotten it.

The whole issue has changed. Today the UP police is applauded for arresting those who were on their way to unleash ‘terror activities’ at Hathras!

People there do not talk about Hathras, but they remember the arrest of a journalist who was on his way to indulge in ‘terrorist activities’.