In Punjab’s border belt, drones from Pakistan are the new unseen enemy that keeps security forces on their toes and locals struggling with unanswered questions It has been a tough night for the policemen stationed in Bhikhiwind, Khalra and Khemkaran areas of Tarn Taran district. They have been on a hunt for drones which have been sighted by Border Security Force (BSF) jawans on the Indo-Pak border but their vigil has not resulted in any solid information or located the payload that the drones may have been carrying from Pakistan to India.

The lush green fields of this part of Tarn Taran district have seen the worst of fighting between India and Pakistan in the two wars — 1965 and 1971. In 1965, this was the area on Khemkaran-Bhikiwind road that saw a Pakistan Army tank offensive threatening to make deep inroads into Indian territory till it was stopped in its tracks by a resolute Indian defence many kilometres down this road. Almost every border villager here has tales to tell of the two wars and how they or their elders fared in it.

These border districts of Amritsar, Gurdaspur and Tarn Taran have also witnessed the worst during the years of militancy in Punjab between 1984 to 1995, which claimed thousands of lives and sent the state and the country into turmoil.

But now a new unseen enemy is at hands, one that is often only heard and not seen. BSF personnel open fire at the drones which are launched from within Pakistan but they have no idea if they ever hit them or not. Many times they can only observe some lights flashing and retreating when they fire at them with their small arms.

The topography of the area offers no particular challenge to someone who may be interested in sending drones across the border from Pakistan. The land is flat for miles on end and the line-of-sight signal would be available for the person operating the drone. And at many places the villages and houses are so close to the border fence that it would not difficult to land the drone in some courtyard with precision.

“They operate the drones with GPS coordinates which are pre-programmed for the drone to land at some place or at least reach that place to dump the consignment,” says SSP, Tarn Taran, Opinderjit Singh Ghuman. He too has been on the night domination patrolling which failed to yield results. 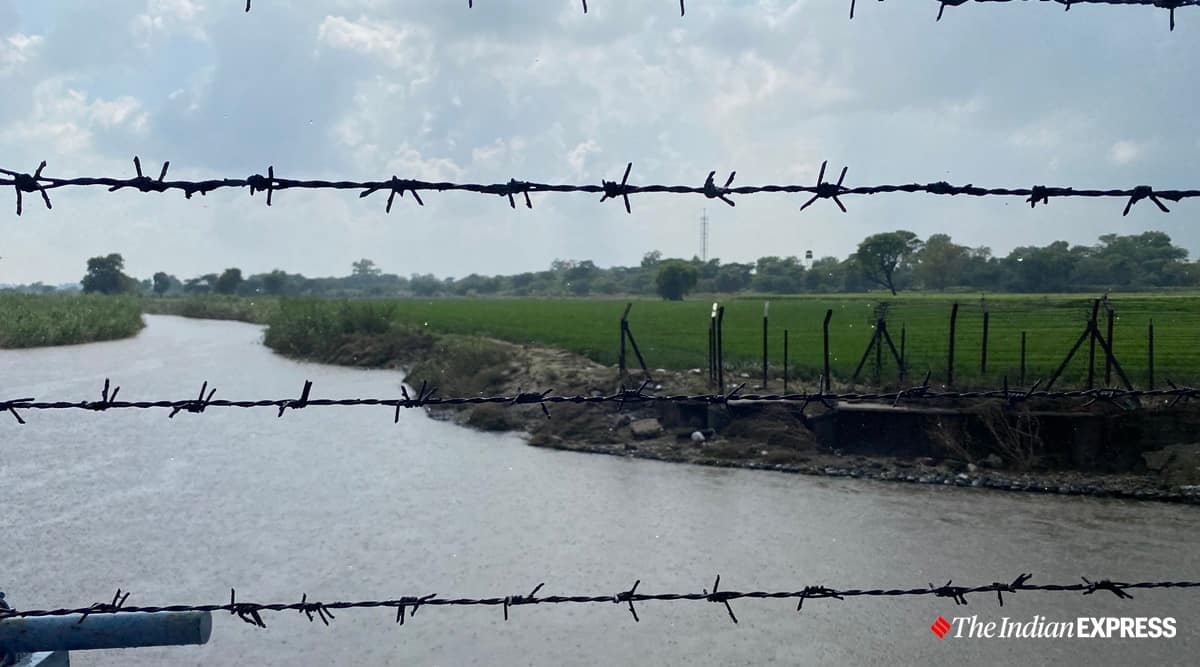 “Not even a scooter was seen plying on the road by my police personnel on ‘nakas’ so there was no one who could have moved around to pick any packets of drugs or arms,” he says.

Ghuman is not certain whether these drones actually go back or they stay on at the place of delivery.

“The range at which they can operate goes down with the amount of weight they carry. Therefore the area of operation of these drones is limited. It could well be that some of them just land at the farthest end with the coordinates already fed into them,” he says.

Clad in jeans and shirt, Inderbir Singh, Sarpanch of Pahuwind village, is much younger in age than the white bearded Sarpanches in the area. He has a house and businesses in Amritsar and also maintains the farm at his village. But he is sceptical about the drones threat being as serious as being portrayed.

“We have only heard about the drones being flown into India from Pakistan. We have never seen any. Nor has anyone in our villages. But we read news reports that something has happened and some weapons and drugs have been recovered. You tell us. Is it true? Can something like this happen so frequently,” asks Inderbir.

Proliferation of arms and ammunition in the border areas is at an all time high according to a Cabinet minister of Punjab who does not want to be named.

“Every packet of heroin which comes on a drone also brings with it a 9mm pistol. There are so many illicit arms in the border areas that one has to be very careful picking a fight even with a passing motorbike rider. Who knows he may pull out a Chinese pistol on you,” says the minister.

The SSP, however, says that this is not a new phenomenon. “Even with traditional methods of smuggling on the border, heroin packets have always come with small arms like pistols and some ammunition. The game plan is quite clear. The drugs may get passed on to be supplied in rest of the country or even the world, but the pistols and other arms are more likely to remain in the state to increase crime,” he says.

The SSPs contention is backed by facts. Almost every drugs seizure by BSF and Punjab Police on the order has weapons like pistols, AK-47 rifles and grenades with it. 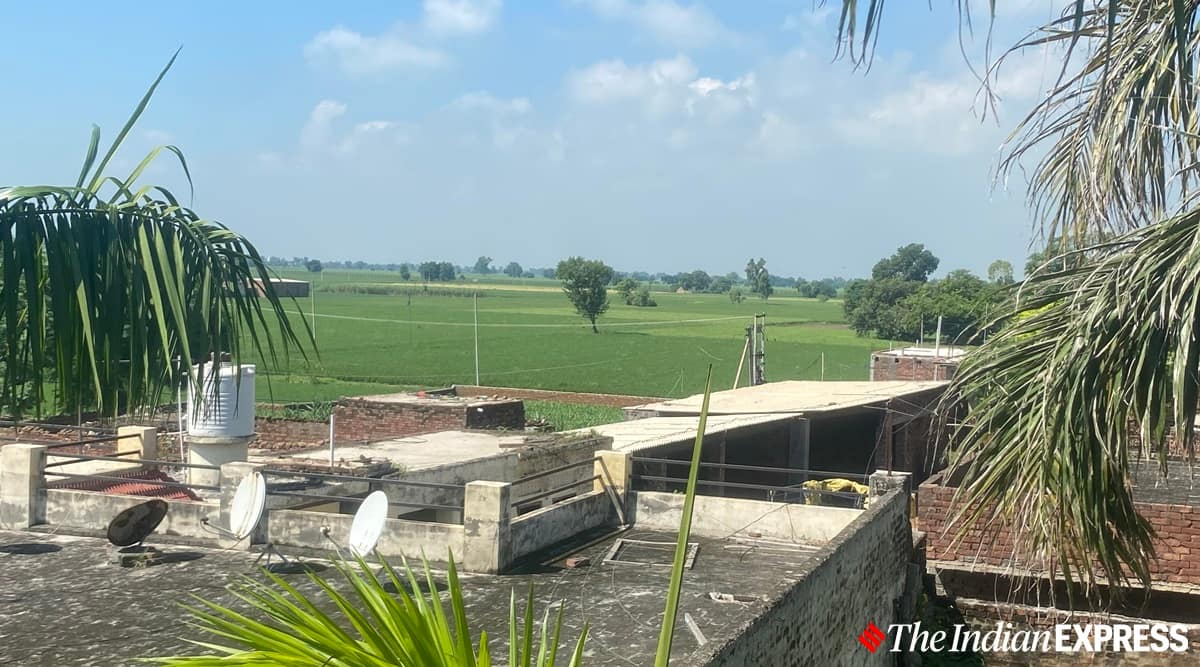 And, of course, Pakistani SIM cards for mobiles are also ubiquitous. This reporter searched and found not less than three Pakistani telecom providers signal being easily available all along the border. However, in the age of mobile data, the importance of SIM cards has diminished as the risk of interception is greater.

“WhatsApp calls are the favoured means of communication between Indian smugglers and Pakistani smugglers as these are encrypted and the data connectivity is quite good in the border areas too,” says an intelligence official.

The Sarpanch of village Dhul Nau very close to the Indo-Pak border has his hands full fighting the sudden flood which has come in the village due to heavy rains. Drones are his least concern at the moment.

“Koi drone nayi aunda ethe. Saaareyan nu pata hai kaun kee karda (no drone comes here. Everybody knows what people are up to),” says Sarpanch Rashpal Singh. What he is hinting at is that the nefarious activities of some people are known to everybody in the villages and not hidden. This is a common thread which runs all along the border belt with villagers insisting that the police and the intelligence officials, apart from BSF, are well aware of the ‘bad elements’ and that the drones are just a “theory”.

The SHO at the Khemkaran Police Station, Kuldeep Rai, too has had a sleepless night having been part of the night domination patrol. A veteran of the fight against militancy in Punjab, Rai has his hands full with routine policing too, as any SHO in the Majha region, famous for people getting into a fight on slightest excuse, will testify. Currently, he was busy sorting out the problems of man whose wife, in her early 50s, had eloped with a young man of 25 and refuses to come back home.

Free from his desk job, the SHO accompanies this reporter to the border fencing where the Kasur Nullah enters Pakistan and actually goes towards the Pakistani city of Kasur after which it is named. Rains over the past few days have swollen the Nullah and a Pakistan Rangers post is just a stone’s throw away. Standing astride the newly constructed bridge on the Nullah, Kuldeep Rai is circumspect about the drones.

“We have not seen much activity in the area of our police station. It is more towards Khalra. I am not sure of the reason. But out here it is peaceful,” he says. There is no explanation why certain areas on border are more preferred for drone activities while others, right next doors, are left untouched.

“It all may be a hoax for all we know. Who has seen a drone coming? We are just told that it was heard one night or the other night and that BSF has fired at it. As for people who are involved in smuggling, sareya nu pata kaun ne (everyone knows who they are). Before the fence came up these people were involved in smuggling gold. Now it is ‘something else’,” says Gurmukh Singh, Sarpanch of Mastgarh village, located very close to the border. 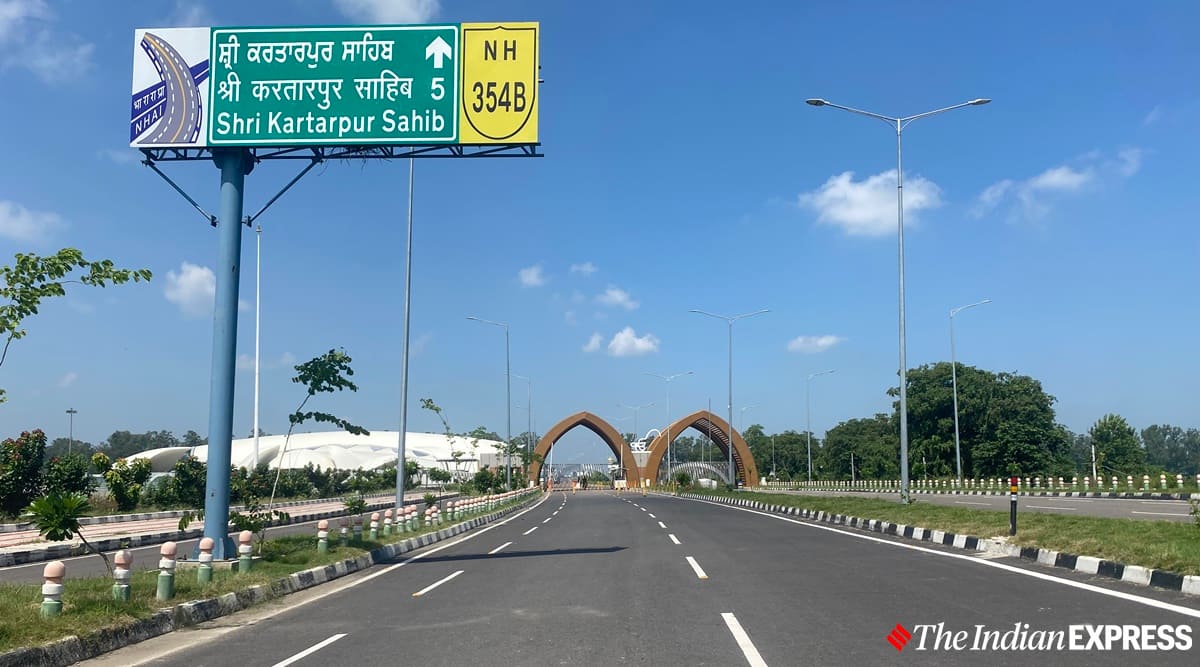 Brothers Karambir Singh and Rajbir Singh at Rajoke village, which has seen a lot of drone activity, have some searching questions to ask. Karambir, the elder brother, is also the Sarpanch of the village.

“Youth who do nothing go around in cars and wear shoes worth Rs 20,000. From where do they get the money for these? I do not know about this drone business but there is enough going on without drones too. Why do the police not ask these people from where they are able to afford these expensive things,” asks Rajbir, sportsman.

When asked about the recovery of arms and ammunition in the area dumped by drones, the brothers scoff at it. “Do you think someone will bury expensive weapons worth lakhs in the mud to let the police find them?” asks Parambir.

SHO, Khalra Police Station, Jaswant Singh, under whom Rajoke village falls, and which also has a police chowki, is well acquainted with this area have had previous tenures there. Not the one to take any chances, after the sightings of drones by BSF in near the village, he has deployed a Quick Reaction Team 24X7 in an armoured truck on the road leading from the border towards the rest of the village.

“Senior afsar kehnde ne drone sirf aunda, jaanda nahin wapis (senior officers say the drone only comes, it does not goes back). We have not seen or heard anything. Only BSF people say they have and they fire at them,” he says. After recent sightings, Jaswant Singh too has played a part in the night domination operations but found nothing.

“This is my second tenure here. I never heard about drones coming during my first tenure but now in my second sting I have heard about them coming twice in a short span of time,” he says.

According to police, there have been 60 drone sightings in Punjab border villages over a period of 20 months.

The border town of Dera Baba Nanak is roughly 75 km from Rajatal village. It is the place where the Kartarpur Corridor came up in November 2019, inaugurated with much fanfare. However, it was operational only for four months before it was closed down in March 2020 as the Covid pandemic raged across the world.

However, the requests for reopening of the corridor have not met with much enthusiasm among the security agencies because of the drone problem on the borders. Despite repeated requests by the Punjab government for re-opening the corridor, it has stayed shut. In August 2021, an IAF Unmanned Aerial Vehicle (UAV) crashed near Kalanaur, not far from Dera Baba Nanak, causing panic in the area. The UAV was keeping an eye on the activities on the Pakistani side of the border amid the increased drone activities seen in the area.

Inside Gurdwara Darbar Sahib in Dera Baba Nanak, not far away from the border, the devotees are still hopeful for the corridor to be opened before the birth anniversary celebrations of Guru Nanak Dev in November.

Baldev Raj, a retired BSF Sub Inspector, says there has been some talk of the corridor opening. The new deputy Chief Minister-cum-Home Minister of Punjab, Sukhjinder Singh Randhawa represents the Dera Baba Nanak constituency and has been a big votary of the corridor’s opening.

“Sarkar diyaan gallan sarkar jaane. Oss paase waale ta kehnde ne kholo (only governmnets know what they are thinking. The people on the other side (Pakistan) too are saying open it),” says Rattan Lal.