Asterix and the Griffin, the 39th Asterix comic (or "album" as some prefer to call them) has just hit stores all across the world Asterix and the Griffin  (Asterix No. 39)
By Jean Yves-Ferri and Didier Conrad
Rs 499

Following a rough phase in the nineties and the earlier part of the twenty-first century, the legendary Asterix series has seen a revival of its fortunes under the new creative team of writer Jean Yves-Ferri and illustrator Didier Conrad.

The duo has got the Asterix bandwagon back on track after a phase when Albert Uderzo tried both writing and illustrating the work (with mixed results) following the demise of original writer Rene Goscinny in 1977. Yves-Ferri and Conrad did a very good job with Asterix and the Picts (2013), Asterix and the Missing Scroll (2015), Asterix and the Chariot Race (2017, which actually had a character called Coronavirus!) and Asterix and the Chieftain’s Daughter (2019), and are now ready to take us all on a fresh trip to Asterixland in their latest work, Asterix and the Griffin, the 39th Asterix comic (or “album” as some prefer to call them) which has just hit stores all across the world.

Well, actually, not really a trip to conventional Asterixland, which is the Gaulish village surrounded by fortified Roman camps. In this adventure, the little Gaulish warrior known for his cunning is off with his friend, the mighty Obelix and the wise village druid, Getafix, to Sarmatia which lies in what the Romans call Barbaricum, or modern Ukraine and Russia. It is a massive land of ice and forests and also home to the sacred animal of the Sarmatians, the Griffin, a creature that is half-eagle and half-lion. Fascinated by tales of the animal, Caesar sends his troops under the guidance of his geographer, Cartographus, to find and capture the mystical animal and bring it back to Rome in triumph. Of course, Asterix and his friends get wind of this and head off to help the Sarmatians. 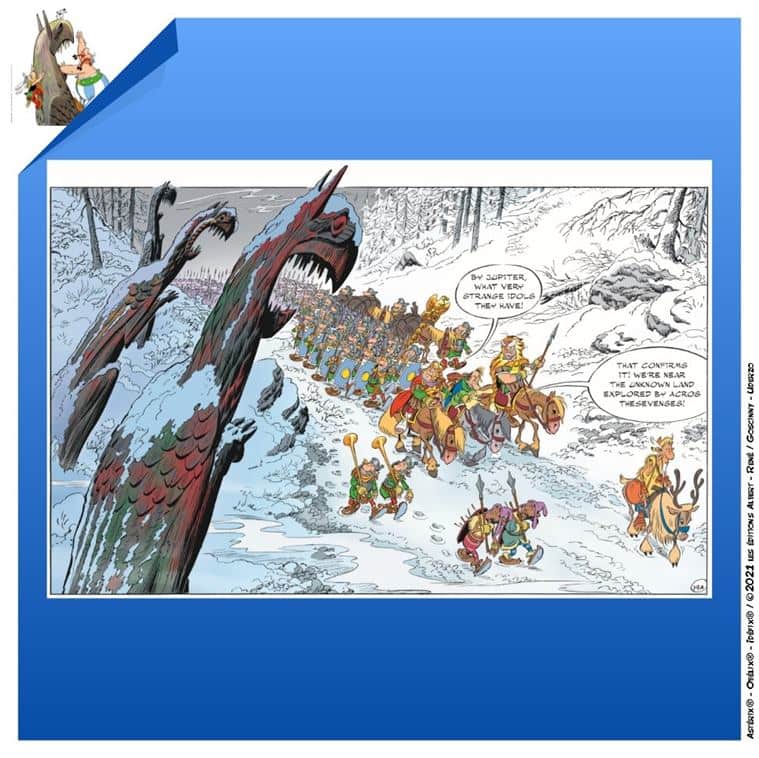 Yves-Ferri and Conrad weave their magic around this tale and the result is a high quality comic, right up with the best the duo have delivered so far (Asterix and the Missing Scroll, in our opinion). A notable part of the new creators’ approach is the fact that they do not go for simple drink-magic-potion-become-invincible-and-beat-up-enemy solutions. The result is a plot that is substantial and which leaves scope for plenty of wordplay.

Wordplay, incidentally, is perhaps the highlight of the Asterix series, and there is a lot of it in Asterix and the Griffin as well. There are of course, the names – Caesar’s geographer is called Cartophagus, a star gladiator is called Vainglorius, and then there are the names of the Sarmatians – a shaman called Fanciakuppov (Fancy a cup of…), an Amazon warrior called Kalashnikova (who evidently was “off like a shot”) and another called Molotova, and a wolf called, well, Wolferine!

There’s more, of course, than just clever names here. There are Amazon warriors involved, there are a few statements that would make Mr Bezs wince or smile. When one of the Amazons gets captured and handed over to the Romans without even so much as a demand for ransom, one of her friends exclaims “Free Amazon delivery – how can we compete with that?” On another occasion, when Asterix and Obelix try to rescue the captured Amazon, her Roman captor says, “As you can see, your Amazon package is safe with us.” Similarly when Caesar tells his geographer that his expedition to find a cyclops was a disaster, he replies: “Aha, but I have dotted all the i’s this time.” (A cyclops has only one eye!). There are some priceless exchanges around Asterix getting to grips with the fact that in Sarmatian society, women are the hunters and warriors. As one of the Amazon warriors tells Asterix, “Romans are all war-war and not jaw-jaw – and war is a woman’s job.” Our hero is not too comfortable being patronised and made fun of by a bunch of woman warriors, but feminists are going to love it (incidentally, it continues the new team’s trend of using strong women characters, which was seen in The Chieftain’s Daughter, where a character seemed based on Greta Thunberg). The illustrations are classically Atserix, with rich colours and an amazing amount of detail (a stark contrast to the more minimalist approach seen in Tintin), bringing the snow-bound wasteland to life.

No, it is not perfect. For some reason, the publishers dropped the teaser excerpt they had shared of the comic from the main comic itself. The result is that part of the story seems to start rather abruptly, with no real context – you suddenly come across Asterix, Obelix and Getafix in the middle of the snow and when Asterix says about a wolf, “Must have been sent by your Shaman friend,” you wonder what he is talking about. The teaser excerpt had actually given us the reason why our heroes were out there but without it, the book’s start seems abrupt – incidentally, the teaser also included a small tribute to a scene in Tintin in Tibet (the Druid screaming in his sleep and upsetting a game being played by Asterix, just like Titin did in that comic), which makes its exclusion all the more puzzling. There are also tiny errors like the cheesemaker being initially referred to as “Wottastinkov” and then being called “Viraloadov.”

But none of these can take away from the entertainment that Asterix and the Griffin delivers. This is classic Asterix, with great illustrations, plenty of word play, historical allusions and all. In short, a feast for the eyes and the mind, retaining its status as perhaps the best comic strip ever. The legacy of Uderzo and Goscinny seems to be in good hands. Asterix and the Griffin is a must-buy and must-read!