A member of the Assam Human Rights Commission said the state government has been asked to submit a report on the violence and deaths at Sipajhar. 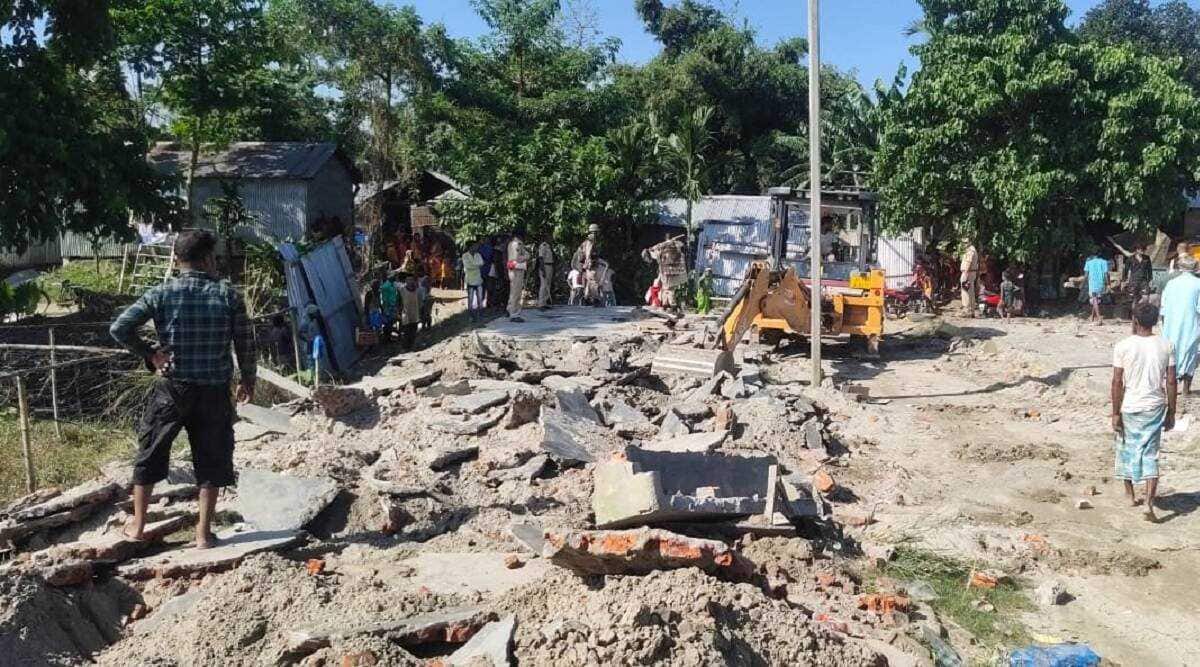 After two arrests Monday, Assam Police Thursday picked up one more person for allegedly “instigating” the violence during the eviction drive at Sipajhar in the state’s Darrang district on September 23 that left two dead.

The arrest of 40-year-old Sarifuddin from Dholpur 1 village was confirmed by Darrang SP Sushanta Biswa Sarma. “Like the previous two arrests, even he was found to have been instigating the protesters,” Sarma said.

On Monday, Chand Mamud, 47, and Asmat Ali Ahmed, 37, were arrested from Dholpur 3 village and nearby Kirakara, respectively. Families were being evicted at Dholpur 3 when there were clashes between protesters and the police, leaving a 33-year-old and a 12-year-old dead. The three arrested have been booked under multiple IPC sections, including attempt to murder and criminal conspiracy.

Sarma added their investigation on the three arrests had not revealed any link with the Popular Front of India (PFI). “However, we are still finding out more,” he said. Chief Minister Himanta Biswa Sarma had earlier hinted at a role by the PFI, which has been under the scanner of government organisations. The three are currently in Mangaldai Jail.

While both Mamud and Ahmed are leaders of local panchayat bodies, Sarifuddin is a daily wage labourer.

According to his brother, Jorifuddin, Sarifuddin had suffered a bullet injury during the violence on September 23. “He was shot on his leg and was taken to the Gauhati Medical College (GMCH),” Jorifuddin said. He claimed that the police had picked up his brother from the hospital late Wednesday night and took him directly to Sipajhar police station, “despite having a bullet injury.”

“He had not recovered fully. We arrived at the station Thursday morning and around 2 pm, we were told that he has been arrested,” he said.

However, the SP said, “He was released from GMCH and only then was he arrested Thursday.”

Jorifuddin said Sarifuddin’s family in Dholpur 1 had not been evicted yet. “But his in-laws’ family, who live in Dholpur 3, were evicted on September 23. So, he went to help. We do not know what happened that led him to being shot at,” he said.

The eviction drive in Sipajhar had turned violent after clashes broke out between the police and protesters. A horrifying video showed a protester armed with a lathi being shot dead by a policeman, then jumped on and stomped on by a civilian.

Following the violence, the CM had instituted a judicial probe into the deaths and ordered the arrest of the civilian. On Thursday, a member of the Assam Human Rights Commission told The Indian Express that the state government has been asked to submit a report on the violence and deaths at Sipajhar.

“We have noted the violence and deaths during the eviction drive. We have asked the government for a report to be submitted within a month,” he said.