Patil said the way BJP ministers and leaders have come forward to support Goswami clearly reveals that “he (Goswami) is a BJP worker”. 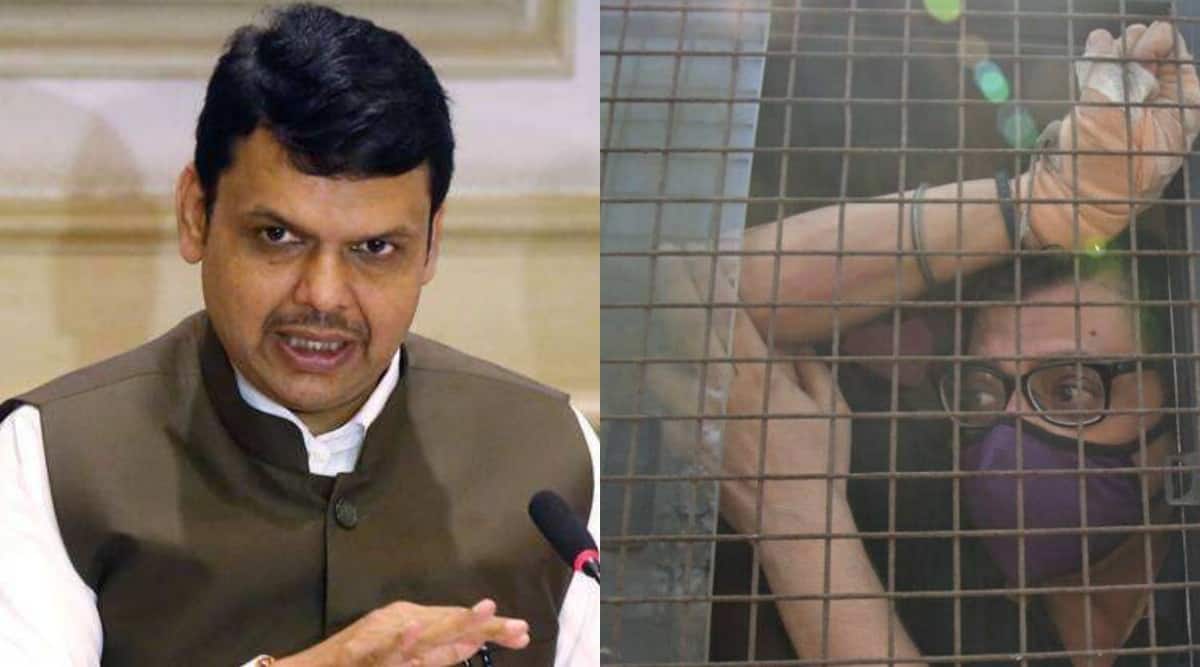 AFTER the arrest of Republic TV Editor-in-Chief Arnab Goswami in connection with a case of abetment to suicide of interior designer Anvay Naik and his mother Kumud Naik, and the subsequent press conference by Naik’s family, the three constituents of Maha Vikas Aghadi government on Wednesday demanded an investigation against police officials who allegedly put pressure on the Naik family to close the case. The NCP also demanded that opposition leader and former chief minister Devendra Fadnavis be made a co-accused in the case.

“From the press conference of Naik’s family, it has become clear that pressure was… put on them to sign papers related to closure of the suicide case. Since at that time, the Home ministry portfolio was with then chief minister Devendra Fadnavis, he should be made a co-accused in the case. The police officials who tried to pressure Naik family should also be made co-accused,” said NCP state spokesperson Umesh Patil.

Patil said the way BJP ministers and leaders have come forward to support Goswami clearly reveals that “he (Goswami) is a BJP worker”. “In Uttar Pradesh, when a journalist wrote an article, she was charged under the Atrocities Act. BJP leaders and ministers never came forward to support her. Similarly, several journalists have been arrested in the country but BJP never took their side,” he said.

Patil said since the Naik family has said they were asked to sign papers in the office of a joint commissioner of police, NCP has sought investigation into this entire episode. “The nation wants to know when two people have committed suicide and when a suicide note has been found, specifically naming the person, why the accused was not arrested,” said Patil.

Explained | What is the suicide case in which Arnab Goswami has been arrested by Maharashtra Police?

Shiv Sena leader Neelam Gorhe, who is the deputy speaker of Legislative Council, said, “There is need for a proper investigation into the allegations made by the Naik family. It seems there was pressure to suppress the facts and prevent the arrest of the three accused. If the police officers are found guilty, action should also be taken against them…”.

Criticising BJP’s allegation that an ‘Emergency-like situation’ exists in Maharashtra, Gorhe said, “This is about justice to a family whose two members were forced to end their lives…Instead of seeking justice for an aggrieved family, BJP is supporting the accused. A case has been filed against Arnab Goswami and two others… to call the arrest an Emergency-like situation is in insult to Anvay Naik, who was forced to commit suicide along with his mother. BJP is parading lies to the people and is backing the wrong person.”

Describing the arrest of Goswami as “true tribute to Anvay Naik”, state Congress spokesperson Sachin Sawant said, “For two years, the Devendra Fadnavis-led government suppressed the case. Threats were given and pressure put on Naik family. Therefore, the Congress demands that an investigation be conducted to find the other culprits in the case.”

Sawant said instead of registering Goswami’s statement in Alibaug, it was registered in the office of a top police officer. “It needs to be ascertained why special treatment was given to Goswami,” he said.
Congress leader Gopal Tiwari said, “Arnab Goswami is an accused and BJP is supporting an accused. This only exposes the real face of the BJP.”

BJP chief spokesperson Keshav Upadhaye, however, said, “The Maha Vikas Aghadi is practicing politics of vendetta. Just because Arnab Goswami is asking them inconvenient questions, they are taking action against him.”