The Chief Minister was initially scheduled to attend a legislature party meeting on July 26 and hold a luncheon with MLAs on July 25 but the programmes have now been reportedly rescheduled. 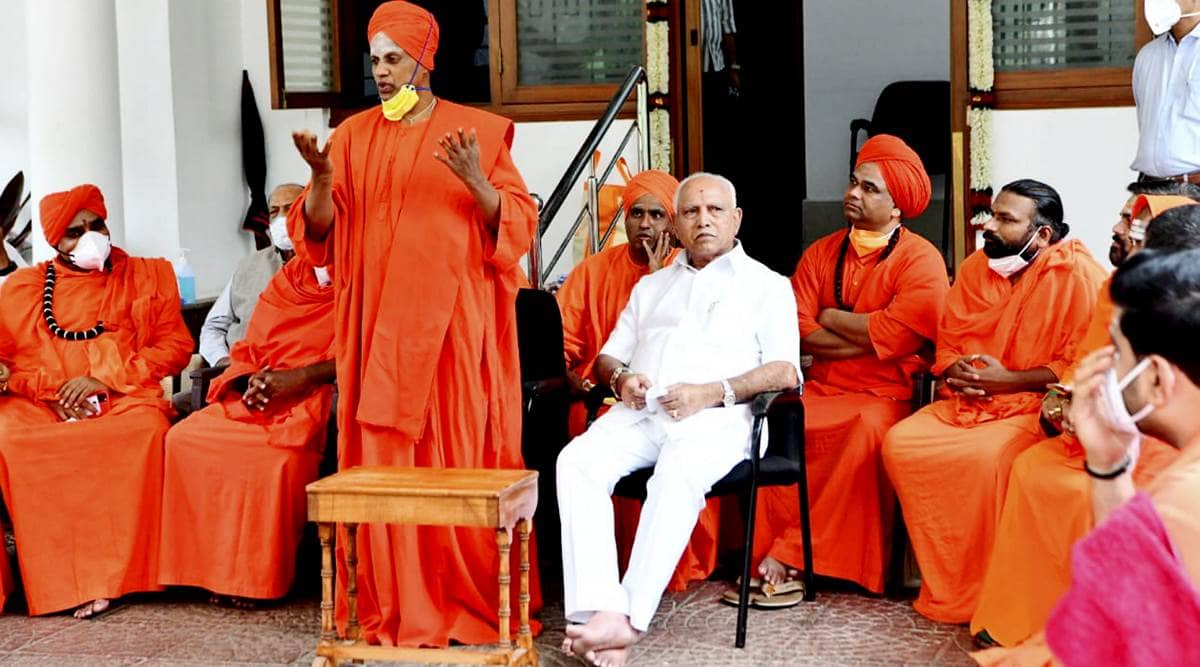 KARNATAKA CHIEF Minister B S Yediyurappa, who maintained silence over the past four days as members of his Lingayat community and supporters opposed any move by the BJP central leadership to replace him, issued a statement on Wednesday to reaffirm his loyalty to the BJP and to adhere to the party’s discipline.

“I am privileged to be a loyal worker of the BJP. It is my utmost honour to serve the party with the highest standards of ethics and behaviour. I urge everyone to act in accordance with party ethics and not indulge in protests/indiscipline that is disrespectful and embarrassing for the party,” Yediyurappa said amid speculation he would leave office once the government completes two years on July 26.

Yediyurappa traveled to Delhi over the past weekend and was reportedly told by party leaders and Prime Minister Narendra Modi that he should work towards bringing the BJP to power again – in what is being seen as a sign that the BJP is expecting the 78-year-old veteran to resign of his volition in the coming days.

There is speculation Yediyurappa could resign on July 26 when his government completes two years in office – making way for a CM chosen by the BJP leadership to govern for two more years.

The Chief Minister was initially scheduled to attend a legislature party meeting on July 26 and hold a luncheon with MLAs on July 25 but the programmes have now been reportedly rescheduled.

Since his return from Delhi on Saturday, Yediyurappa has received an outpouring of support from seers within the dominant Lingayat community to which he belongs. Lingayats constitute 17 per cent of the state population.

The support from his community has come even as BJP MLAs considered to be his loyalists have remained silent, unlike in the past when they would engage in shows of strength to declare Yediyurappa as their undisputed leader in the party.

A group of 12 legislators, who were among the 17 who defected from the Congress and JDS in 2019 to help Yediyurappa form the government by toppling the JDS-Congress coalition government, have also been quiet over the past few days. A few of them had lunch with Yediyurappa on Tuesday and met among themselves on Wednesday.

“In these difficult times, Yediyurappa is doing good work. In these times of difficulty, this news about leadership change is not necessary. We want him to continue till the next Assembly elections due in April 2023,” Siddalinga Swamy told reporters.

Another seer, Sri Sangana Basava Swami of Kottur Veerashaiva Shivayoga Mandir, on Wednesday blamed the RSS for the leadership change controversy in Karnataka. “RSS is a caste-based organisation, there are no leaders in the RSS who are liberal-minded. We know what happened in Maharashtra, millions of Maratha youth worked hard and brought the BJP to power but RSS leaders made Devendra Fadnavis, a Brahmin, the CM of Maharashtra,” he said. “The party subsequently lost the sympathy of the Maratha community and lost the elections there.”

“There are reports that RSS wants to replace Yediyurappa with union minister Pralhad Joshi but that will not work. If the BJP replaces Yediyurappa then it will lose its existence in Karnataka. This will only benefit the Congress or JD(S),” the seer said.

The chief minister told a group of seers who visited him on Tuesday that he has to fall in line with whatever the BJP leadership expects from him.