Jake Paul – Tyron Woodley boxing fight: The fight — taking place in Paul's hometown Cleveland and sanctioned by Ohio’s boxing commission — is the latest in the trend of crossovers and celebrity boxers. Gone are the days when professional boxers earned wins and padded their records in search of a marquee fight. For the third time this year, a high-profile bout is between a YouTuber and a retired fighter.

YouTuber Jake Paul and former UFC champion and boxing debutant Tyron Woodley will face off on Monday morning, August 30 (India time). The fight — taking place in Paul’s hometown Cleveland and sanctioned by Ohio’s boxing commission — is the latest in the trend of crossovers and celebrity boxers. It is the fourth pro fight for Paul, who knocked out former MMA star Ben Askren in April. In June, elder brother Logan went eight rounds against Floyd Mayweather Jr in the exhibition bout with no winner and more than one million pay-per-view buys.

Who is Jake Paul?

A 24-year-old with a mass following: precisely 20 million subscribers on YouTube and 18.5 on Instagram and Twitter combined. That’s the all-important facet in a pro-boxing landscape that increasingly depends on Pay-Per-Views and streaming wars.

Paul followed in elder brother Logan’s footsteps, beginning his YouTube career with prank videos and daily vlogs. Since then, sponsorship deals, marketing and merchandise businesses, along with forays into rapping and boxing have raised his net worth to $20million, according to Celebrity Net Worth.

Alongside the meteoric rise, Paul has courted controversies in the form of scam accusations, controversial comments and videos with racial slurs, sexual assault allegations. He was fired from Disney Channel in 2017, but all the scandals have propelled the ‘The Problem Child’ to further fame and fortune.

Depends on whom you ask.

“He’s only 24. And he’s with his boxing team 24-7. He has no time to party at night. That’s a big advantage for him. The fact is he’s a tough kid and he’s a hard worker. He’s not taking time off. He has momentum now and sometimes momentum is a powerful thing. And he’s learning quickly,” BJ Flores, Paul’s trainer, told Boxing Junkie. “Can he win a world title one day? I don’t know. But he can beat these MMA guys.”

Amanda Serrano, the seven-weight world champion who will defend her WBC and WBO featherweight titles against Yamileth Mercado on the undercard, believes “Jake Paul isn’t playing”.

Paul’s boxing career began alongside elder brother Logan’s, when the two fought another YouTuber brothers pair — England’s KSI and Deji Olatunji. While Logan and KSI boxed to a majority draw, Jake won the white-collar boxing match against Deji with a technical knockout.

Since then, Paul has gone 3-0 (all KOs) and his team deserves plaudits for the matchmaking. In a cunning, loopholey manner, Paul has shut down criticism of his skills with his choice of opponents.

After the amateur win over a YouTuber, his pro career began defeating another YouTuber AnEsonGib. But he hadn’t fought a real athlete. He then competed on the undercard of Mike Tyson’s comeback fight against Roy Jones Jr last November, knocking out former NBA point guard and Slam Dunk champion Nate Robinson. But he hadn’t fought a fighter. In April, he took on retired Mixed Martial Arts fighter Ben Askren, an accomplished wrestler and MMA titleholder with semi-laughable striking. Paul knocked him out. But he hadn’t fought an MMA fighter who was a UFC champion and could also box. Enter Tyron Woodley.

Who is Tyron Woodley?

Woodley, a state wrestling champion from Missouri, began his MMA career in 2009 and amassed a 19-3-1. He won the UFC welterweight championship and defended it four times until a four-fight losing run saw his UFC contract come to an end.

While primarily a wrestler, Woodley has 7 knockout wins on his record. But the fight would be his first boxing bout, with heavier gloves against a 15-years younger and four-inches taller Paul.

Why is the fight being criticised?

That the bout between a YouTuber-boxer and a retired MMA fighter is getting more traction than several seasoned pros has rubbed off purists the wrong way. Paul’s shenanigans have also irked the boxing fraternity .

“They’re making a mockery of boxing, OK?” Claressa Shields — two-time Olympic gold medalist and multiple-time world champion who made her MMA debut in June — told TMZ earlier this year. “I just say that because there are so many fighters who deserve to be on that platform under Mike Tyson and Roy Jones that did not get that opportunity… Jake Paul is making his money, he’s doing his thing. But stay away from us real fighters.”

Dave Coldwell, a UK-based trainer and manager, believes the criticism comes from “the way that they carry themselves, talking like they can be world champions.”

“Just because you have brought media attention, and you’ve got the spotlight doesn’t actually mean that you’re the best in the world,” Coldwell told The Indian Express. “It’s not a great spectacle for me when I watch these guys… like Jake Paul’s not even fighting real boxers. They are people that are just coming from another sport and it’s almost a disaster waiting to happen. Boxing is dangerous. There have been cases where people get injured, get killed in boxing. And I don’t feel that they understand the seriousness of the sport.

“When you go into something, you have to treat something with respect. And if they did that a little bit more by living the life properly, taking up competitive fights for their level, that’s fine. But when they come in, fight a basketball guy, chins him, and they’re talking about beating top name fighters. That’s ridiculous.” 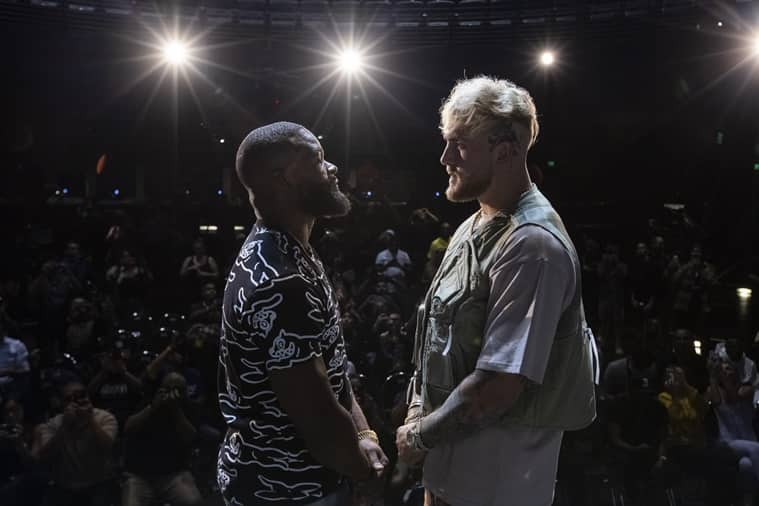 “They understand the world we live in is different, where the most outrageous things get the most views and the views equals money. So I understand what’s going on and understand why they are being so outspoken,” Gill told this paper. “But at the same time for boxing purists it’s frustrating because you know that we know they are not at that level.”

Who are the supporters?

The biggest supporter is one of the heavyweights of professional boxing — Mike Tyson, who has said that “‘boxing owes YouTubers”.

Tyson — who admitted — “I didn’t know (Jake) existed until my sons wanted to fight him one day,” and was in attendance to watch the Paul brothers fight for the first time in 2018.

“Listen, my ego says so many things, but my reality is they help boxing so much,” Tyson told reporters after his comeback fight against Roy Jones Jr. “Boxing owes these guys, they owe these YouTube boxers some kind of respect. They should give them some belts because these guys make boxing alive. Boxing was pretty much a dying sport. UFC was kicking our butts, and now we got these YouTube boxers boxing with 25 million views. Boxing’s going back. Thanks to the YouTube boxers.”

“It kind of confuses me when people talk about disrespecting the sport or not paying his dues,” Bidarian told the Rolling Stone. “You definitely have more negative voices in boxing than positive, but you also have very powerful voices like Mike Tyson, like Roy Jones Jr., like Evander Holyfield — legends of the sport who have clearly said, ‘This is a good thing, you should embrace this.’ There is an audience for this. It’s not necessarily about it being good for the sport because it’ll bring new viewers in, it’s just expanding the sport as a whole. It’s expanding the audience, it’s expanding the reach.”

“Anything that promotes boxing, anything that brings new eyeballs to the sport — new interest, new enthusiasm — has to be supported,” Mauricio Sulaiman, president of the World Boxing Council (WBC) sanctioning body, told ESPN earlier this year.

If Paul defeats Woodley, the next logical step would be to fight either an active MMA fighter or an inexperienced pro-boxer. Tommy Fury, half-brother of heavyweight world champion Tyson Fury who will be boxing on the undercard on Sunday, is a natural next opponent. The 22-year-old with a 6-0 record, expressed his interest this week.

“Jake Paul is a YouTuber and has only been doing this a short while but the guy is good, you can’t say he is not,” Fury told “Morning Kombat” on Wednesday. If he wants to be a real fighter and get respect in this sport, stop talking about Canelo [Alvarez] and [Floyd] Mayweather. Knuckle down and stop fighting MMA people. We all know the reason why he’s fighting them. Start fighting real fighters. If he wants to get it on, we can get it on.”

If Woodley wins, the Paul brand takes a hit. How considerably depends on the nature of the defeat. But it wouldn’t be the end of pro boxing’s golden goose.

Jake Paul vs Tyron Woodley: Official PPV live-stream on the FITE TV app. Main card kicks off at 6:30am IST.