Apart from the Net issues, the remote areas also saw low turnouts as the announcement came late Thursday, with many caught unawares. 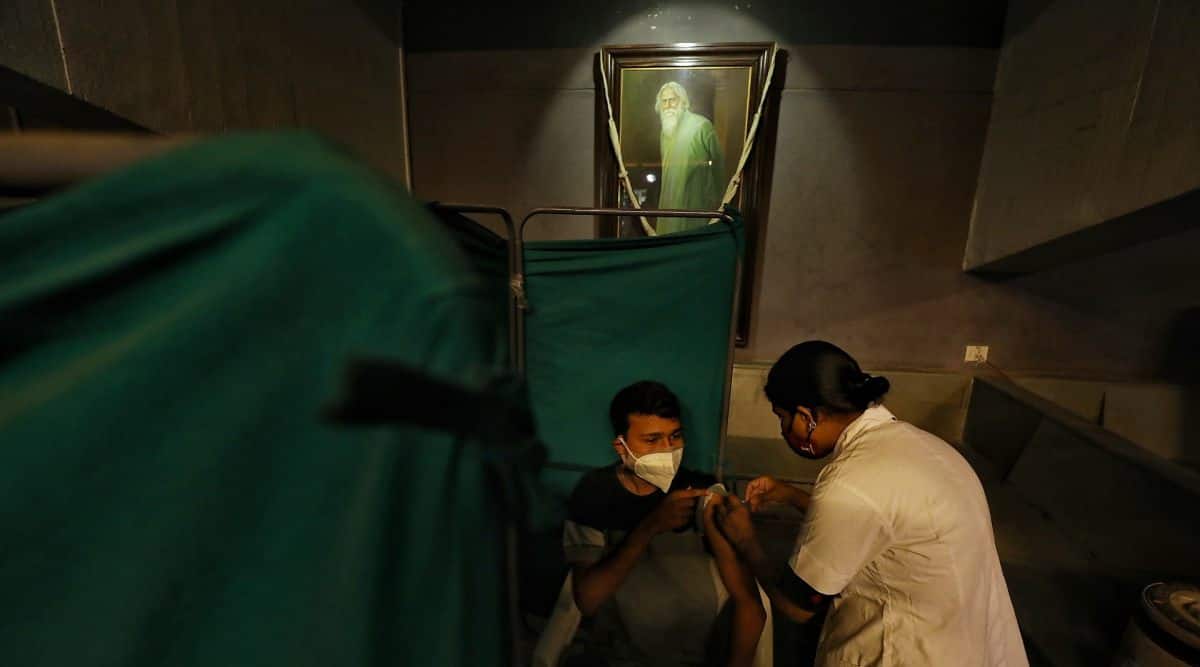 As Gujarat opened up Covid vaccination for the 18-44 age group across the state Friday, remote areas struggled due to Internet and power issues as compared to their urban counterparts. However, the state managed to administer 1.89 lakh doses against its target of 2.25 lakh, set by Chief Minister Vijay Rupani Thursday.

The expansion of vaccination to below 45 age group came a month after this had been started in seven municipal corporations, and Kutch, Bharuch and Mehsana districts.

Apart from the Net issues, the remote areas also saw low turnouts as the announcement came late Thursday, with many caught unawares. Rural centres near Ahmedabad, in fact, saw a large number of city dwellers, who came there after failing to find slots in the corporation area.

Rupani has said ‘village computer entrepreneurs’ would help beneficiaries facing problems register on the Co-WIN platform, for an honorarium of Rs 5 per registration.

Anand Patel, 30, of Tapi’s Antapur village, which has no Internet, says he rushed to Vyara town at 6 am Friday to register. “I was lucky, and got a slot at 4 pm at the Community Health Centre.”

Falguni Gamit, 30, of Katiskuva village in the district, says she and her husband rushed to their CHC on reading about the drive in the papers. “After getting Internet connectivity, we got a time slot between 3 pm and 6 pm… Our parents
are afraid of getting vaccinated. Now they will also get a shot,” Gamit said.

Tapi district health officer (DHO) Dr Harshad Patel said there are an estimated 3 lakh people in the 18-44 age group in the district, of whom 3,000-odd registered and 1,500 were vaccinated Friday. Patel said they expected a rush from Saturday. “Our health officials have also come across inquiries from neighbouring villages in Maharashtra.”

Chief DHO of Dang Dr Dhansukh Gamit also hoped to see turnout improve over the weekend from Friday’s low of 295 of 1,000 people registered.

Valsad DHO Dr Manas Patel though tasted success. Having fought vaccine hesitancy, due mainly to superstition, officials saw as many as 4,700 of the 5,000 registered turn up for doses. “We now hope that elders too will get vaccinated in the
coming days,” Patel said.

Officials also drew satisfaction from the response in the coastal districts of Gir Somnath and Amreli, which were hit by Cyclone Tauktae last month.

In Gir Somnath, more than 1,700 people received shots by 4 pm. Dr Vipul Dumatar, block health officer of Una and Gir Gadhda, said more people would have turned up but for the fact that many didn’t know about the vaccination drive till late. “As many areas of Una are still without power (following the cyclone), there was doubt in people’s mind if the vaccination sessions would happen… This also affected the numbers,” said Dumatar.

In Amreli, 2,604 were inoculated against a target of 3000. “Our PHCs in Jafrabad, two in Rajula and one in Khambha are still without electricity, limiting our capacity to set up more vaccination sites,” Dr J H Patel, the Amreli CDHO.

Even the tribal district of Narmada managed to give shots to 1,364 of the 1,400 registered, out of the target of 2,000. Additional CDHO Dr Vipul Gamit said, “The slots at urban centres got booked overnight,” Gamit said.

The demand in urban areas was most evident in Junagadh Municipal Corporation, the only municipality of Gujarat where vaccinations for 18-44 were not started on May 1. All slots got booked within 5-10 minutes of opening for both Friday and
Saturday, Junagadh Municipal Commissioner Tushar Sumera said. Its turnout for Friday was nearly 100%.