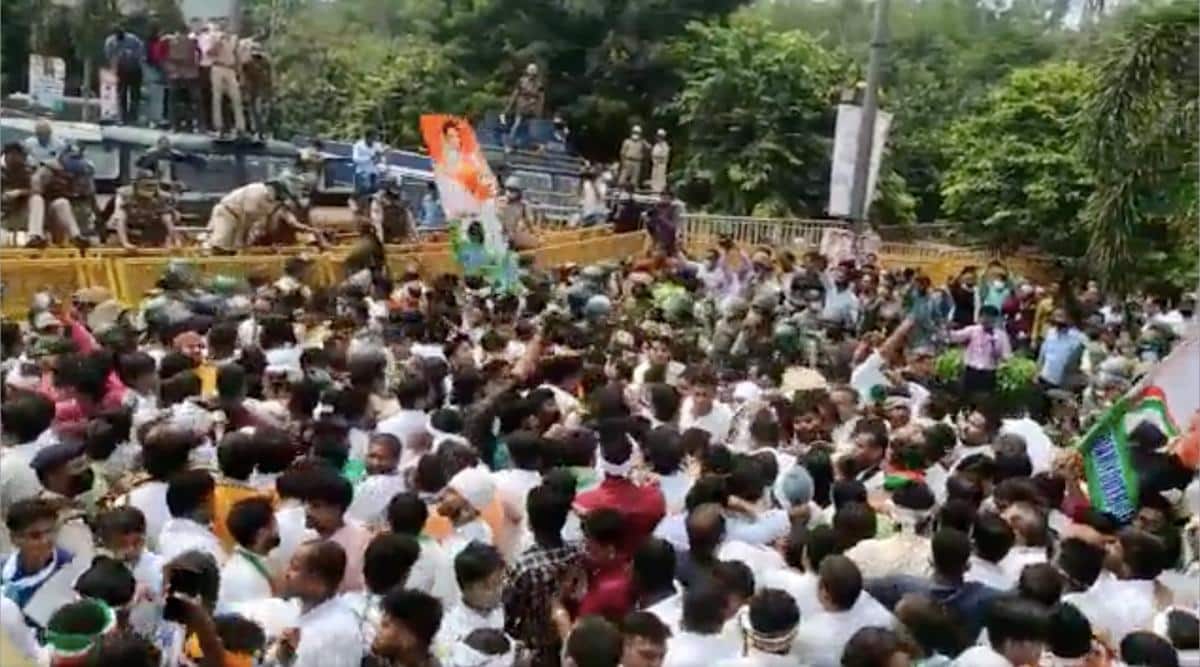 Five Congress leaders were booked and around 100 Youth Congress workers were detained on Wednesday while they were attempting to ‘gherao Chief Minister Shivraj Singh Chouhan’s residence in Bhopal to protest on several issues including the Pegasus snooping allegations, unemployment and inflation.

Police resorted to a mild lathi charge and used a water cannon to disperse protesters.

According to police, around 100 Congress workers were picked up in police vans and dropped off to Ratibad, about 20 kms away from city limits. Speaking to The Indian Express, DIG Bhopal (Urban), Irshad Wali said: “The protesters were dropped off to Ratibad to ensure they do not cause any other damage anywhere in the city. An FIR under 188 was registered on five others.”

The protest in Bhopal was part of an agitation across 52 districts. According to Congress functionaries, the plan was to gherao the Vidhan Sabha on Wednesday, but they had to change plans last minute as the House was adjourned sine die on Tuesday.

Several Congress workers were also injured in the lathi charge. Rakesh Goyal, a Congress worker who sustained injuries on his head said to the media: “We had come to oppose the government’s illegal action on Pegasus, inflation and unemployment. We will continue to protest.”

Thakur appealed to the Prime minister to look into the matter and “instruct the concerned department” to safeguard the “Right of Minority Community (Matua/Hindu) through multi dimensional perspective”.

Thakur is also a leader of the All India Matua Mahasangha, a religious and cultural organisation of the community. Through social media, Thakur had also shared images of the attack in Bangladesh.

Matuas belong to the Namasudra community that migrated to India in droves during the Partition and after the Bangladesh war of 1971.