North 24 Parganas is at the centre of this mass exodus because all rebels are from the district. Once a TMC bastion, the district is slowly witnessing a saffron surge. 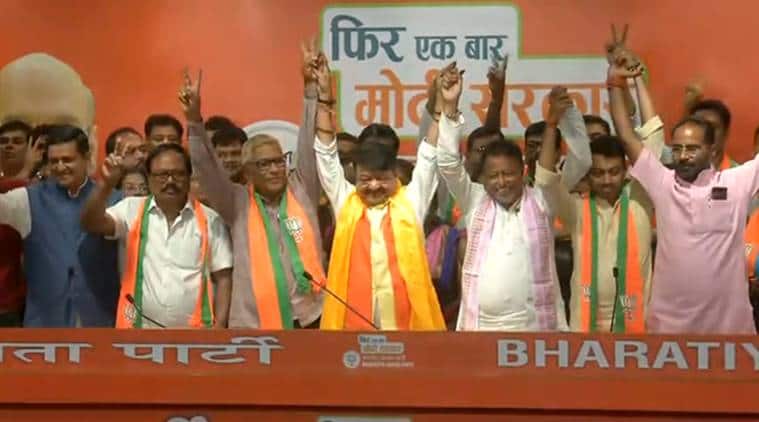 After the BJP made huge gains in West Bengal following its victory in 18 of the 42 Lok Sabha seats, the party has successfully engineered defections in TMC after two of its MLAs and over 60 councillors switched sides.

North 24 Parganas is at the centre of this mass exodus because all rebels are from the district. Once a TMC bastion, the district is slowly witnessing a saffron surge.

Three factors seem to have favoured the BJP.

First, the district, of which the northern suburbs of Kolkata are a part, is home to BJP leader Mukul Roy, who wields influence among local leaders. Roy, once the closest aide of Chief Minister Mamata Banerjee, had been engaged in backroom talks with the rebels even before the Lok Sabha polls.

Second, it shares borders with Bangladesh in the north and east. This election, the BJP narrative on nationalism, security and illegal migrants seems to have struck a chord with the people and local leaders.

Another reason for defection is that TMC leaders were disenchanted with the party.

With the entry of the councillors, the BJP is all set to get hold of four civic bodies — Naihati, Halisahar, Kanchrapara and Bhatpara — of the total 27 across the district.

The BJP won two of the five Lok Sabha seats in the district – Barrackpore and Bongaon – with the latter being the home of Matua community, a BJP vote bank.

North 24 Parganas is also home of muscleman Arjun Singh, who won from Barrackpore on a BJP ticket, and Mukul Roy’s son Subhrangsu, who joined the party on Tuesday and is an MLA from Bijpur Assembly seat in the district.

After it stormed to power in 2011, North 24 Parganas became a stronghold of TMC – winning most of the seats and getting hold of the civic bodies. In the 2016 Assembly polls, the TMC won 27 out of 33 seats in the district.

This is where the BJP wants to force a setback to the ruling party and on Tuesday began the process by inducting TMC rebels into its fold.

“TMC leaders no longer have faith in the leadership of Mamata Banerjee, and therefore they are flocking to BJP. They are fed up with the TMC government and want to see a change. More will join our party in the days to come,” said Bengal BJP chief Dilip Ghosh.

The TMC’s North 24 Parganas district leadership held a meeting with district party leaders and other functionaries to devise a strategy to prevent the exodus.

“We are holding talks with all our leaders to discuss the issue. This is a temporary crisis which will pass very soon. They might take some of our MLAs, but by and large, the people of the district are with the TMC,” said TMC leader Talas Roy.