"This is one big, big part of the data protection and data management story. When we say we are into data protection, we don’t mean just backup. It means being able to protect your data from different kinds of attacks," says Milind Borate. 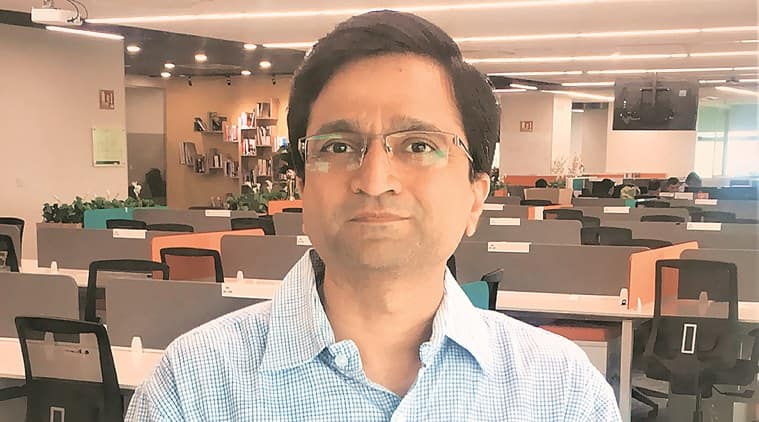 “People are saying that data is the new oil. Using data, enterprises are able to strategise, decide how to build their business and compete better with other companies out there,” says Milind Borate, co-founder and CTO of Druva, a start-up whose goal is to make sure that data, whether it is user data or server data on laptops or on the public cloud, is safe. “If a laptop is stolen or the server goes down, we make sure that the data is protected. We also help clients manage their data. There are petabytes of data and trillions of files out there. It becomes difficult to figure out what’s where. Our aim, over next couple of years, is making sure that, wherever the data is, we will protect it,” he adds. Druva was born in 2008 in a garage with seven employees, after the founders — Borate, Jaspreet Singh and Ramani Kothandaraman — pooled in Rs 30 lakh from their savings. Over the years, the company has grown in size and reach. In June, it received a funding of $130 million and, a few weeks later, it followed up by acquiring a US-based cloud technology start-up CloudLanes.

As data becomes important in modern enterprise, instances of data theft and leakage, as well as ransomware attacks, are on the rise. How does that challenge you?

This is one big, big part of the data protection and data management story. When we say we are into data protection, we don’t mean just backup. It means being able to protect your data from different kinds of attacks. It becomes extremely important for you to know where your data is. There have been cases in which confidential data, which was supposed to sit in this high security data-based server, actually has been copied somewhere else and stayed there for a month or two before somebody hacked into it. You must know where your data is. You must know who has access to that data. And you must know if there are any changes in the pattern of using the data.

For instance, let’s talk about a 10-person accounting team, and most emails that are exchanged are within the accounting team. If one of the members of the team starts sending emails outside the team and there are too many mails going out, it indicates a change in behaviour. It may or may not be a problem but just knowing there is a change in behaviour is important. Flagging and alerting this is important. We play a role here from that perspective, simply by observing what we call meta data. We don’t need to look at data, we don’t need to look at what’s inside that email. Just knowing which mail went from who to who gives us a lot of insight into anything wrong in the system. That’s how we are addressing the problem. The technology used is data analytics and machine learning.

We are not completely in the security space. If you look at antivirus companies, they will go inside the file and figure out there is malware or a virus in there. We essentially look at file traffic — the number of files getting related or deleted — and we try to figure out if there is any ransomware attack. In case of an attack, we can create an alert and help the customer recover their data. If the ransomware attacked a data centre, that data is safe in our cloud, so customers can quickly get the data back.

How does CloudLanes empower you further?

By integrating CloudLanes, Druva brings all the benefits of its cloud capabilities to on-premises environments, providing instant recovery and enhancing data security without requiring any hardware. CloudLanes’ software rapidly and securely ingests data from on-premises and moves it to the cloud in a fast, secure, and auditable manner for protection needs, freeing organisations from legacy scalability and architecture.

You have retained your headquarters in Pune, but also opened one in the US. What are the reasons for an Indian start-up to move to another country?

When we moved to the US, the team that we brought up there was for sales and marketing primarily. If you look at R&D, there is a lot of talent in India. Often, we lose this talent to the US or Europe because the talent doesn’t see opportunities here. For us, over the last 10 years, almost the entire R&D happens from Pune. The only challenge a team here faces is direct connect with customers. The consumer market in India has really opened. Companies such as Flipkart, Ola and payment start-ups can directly talk to customers, ask them what they want and like and how they should change the product. Druva is a B2B — we sell to other businesses and not to consumers directly. For a B2B, the India market hasn’t opened up so much.

What are the advantages of Pune as a start-up ecosystem?

The reason we chose Pune was its tech expertise. There is a lot of tech talent you find here. Tech companies make it a point to start a centre here because they can get tech talent easier here than in Bengaluru. To a certain extent, the infrastructure needs to improve, especially air connectivity to Pune. I really don’t see any other factor that could be a hurdle for Pune to go to the next level. On the other hand, opportunities are great. Bengaluru is becoming difficult from the compensation perspective, traffic and overall strain on the infrastructure. There is stress on that ecosystem. Pune has similar characteristics as Bengaluru. The weather is good, a lot of education institutes are there and the Pune culture is very accommodating. Overall, I see Pune has all these factors working in its favour.

How did the three of you get together to start Druva?

We literally started in a garage. I graduated in 1993 from PICT and worked for three-four years at Persistent Systems, which has a very small team of eight or 10 people. That’s when I got a taste of the start-up kind of environment. I said to myself, ‘Very likely, I will never join a big company ever.’ After I completed MTech from IIT Mumbai, my criteria for campus interviews was that I need to work for a small company. I did not apply to any of the big companies that came on the campus. Later, I started an outsourcing consultancy on my own in 2005, and met Jaspreet and Ramani a couple of years later. They were also looking for starting something. At one point, we said, let’s take the leap and start. Around 2007, we decided to do this full time. My mom was not very happy … especially when I said, ‘I don’t know for sure what will be the situation in three years. It could be a failure. I am taking a risk here.’

Ten years ago, how responsive was the market in India to a start-up?

The first product that we built was around disaster recovery. The idea was to sell to the Indian manufacturing firms. That did not work out because, 10 years back, Indian enterprises were even more sceptical and hesitant of the value that Information Technology added to the mix. The thought process was that the accounting processes could be done using computers but, even then, a lot of accounts were maintained by hand. It was very hard to enter the market and sell them something that would increase their efficiency and competitiveness.

We realised that Indian enterprises are very brand conscious, and hesitated to take up something new, from a new company. Secondly, they are extremely cost-conscious. Their psychology was, ‘If I can save some money today, it’s ok even if I am not getting the best thing. Five or 10 years down the line, I may not be ahead than my competition, but I want to save today.’ Thirdly, I would say that the psychology to take risks and experiment is better in North America and the new economies that are coming up, such as China and Singapore. In India, the consumer market has opened up to trying new things such as payment over your phone but enterprises haven’t shown that kind of risk appetite.

Is there any incident from that time that you want to share?

Once, Jaspreet approached a customer in the NCR region and was trying to pitch the disaster recovery solution to them. The CEO said, ‘I want to use your product on my laptop because there is a lot of data in my laptop.’ Jaspreet was trying to convince him that the product was not for laptops but data-based servers. Then, it clicked to him that there is a gap in the market where people don’t have a way to protect data on laptops. That’s where we conceptualised data protection for user data. Jaspreet, wearing his marketing hat, made sure that whenever anybody searched for laptop backup on Google, our website would show up. Our product was so simple that anybody could download it, set it up and start running it. What happened was that somebody in the UK searched for laptop backup, downloaded our product, tried it out and then sent a mail asking to buy it. The funny thing was that we didn’t even know that, if somebody from the UK wants to buy our product, what should we do. If it were in India, we got a cheque from them and invoiced them. Eventually, we figured that, while we were trying to sell in India, we are getting all these inbound leads from North America and Europe who want to use the product. After we got our first round of funding in 2010, we ended up setting our US office and UK office.

The Budget paid a lot of attention to the state of start-ups, with a number of policy initiatives. What was your opinion of it?

It was a really fantastic decision out there, with respect to easing Angel Tax regulation. We are past that stage so it doesn’t even apply to us, but we are very happy to see that decision coming through because it will give a boost to our early stage start-ups. When we started, there was nobody even talking about start-ups 10-11 years ago.

What’s your message for start-ups today?

The access to talent, funding and markets has become a lot easier. It is a very, very good time to explore and take risks.