The AG’s submission came after the victims’ family members, who are opposing the state government’s appeal against the stay, submitted the reconstitution of a commission of inquiry midway was “illegal” as per the set legal precedents. 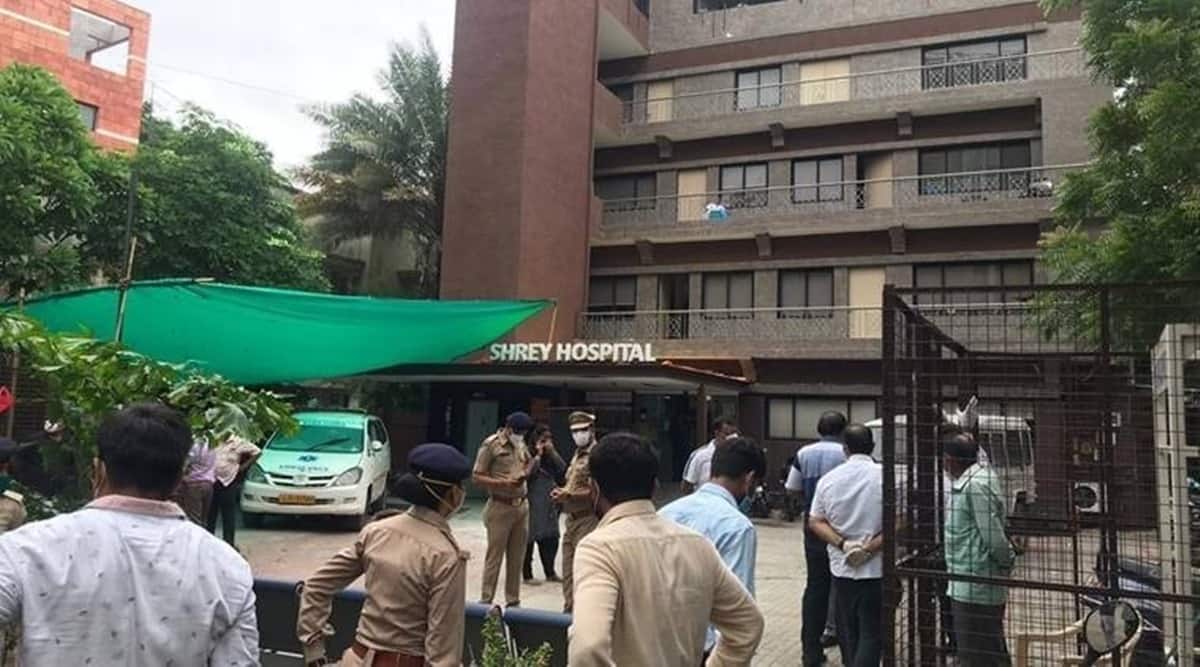 ADVOCATE GENERAL Kamal Trivedi, representing the state government in the August 2020 Shrey Hospital fire case, informed a division bench of the Gujarat High Court the Justice (retd) KA Puj Commission that was looking into the case before the inquiry was handed over to Justice (retd) DA Mehta Commission, had “voluntarily resigned” in December 2020.

The AG’s submission came after the victims’ family members, who are opposing the state government’s appeal against the stay, submitted the reconstitution of a commission of inquiry midway was “illegal” as per the set legal precedents.

A fire in the intensive care unit (ICU) of the private Covid hospital had killed eight patients in August last year. Two victim families, Kalpit Shah, who lost his grandfather and uncle, and Samir Mansuri, who lost his brother, in the blaze had sought that the Justice Mehta commission furnished them with all documents before they are summoned by the panel. The application was rejected by the commission, following which they moved the HC.

A single-judge order of March 19 had issued notice to the state government and the Justice DA Mehta Inquiry Commission and restrained the latter from pronouncing its final report before the state government, which was due for submission on March 31.

The order has been challenged by the state government and is now being heard by a division bench of Chief Justice Vikram Nath and Justice Bhargav Karia.

Senior advocate Percy Kavina, representing the victims’ families, on Wednesday opposed the state government’s appeal and submitted before the division bench that the single-judge order “has not stayed the proceedings of the commission, it merely postponed the pronouncement of its report”. Kavina also submitted that earlier legal precedents “unequivocally says that appointments of this type, where an existing commission is replaced by another, is not permissible”, while requesting the division bench “to not interfere” with the state appeal and let the matter be presided over by the single-judge court. “Any other order will seriously prejudice us,” Kavina submitted.

In August 2020, an inquiry commission headed by Justice (retd) KA Puj was set up by the state government to look into the hospital fire. In December 2020, Justice (retd) DA Mehta Commission took over the inquiry. Responding to Kavina’s submission, the AG submitted before the court that the inquiry commission was not reconstituted by way of replacement or substitution, but rather had to be reconstituted owing to a vacancy that arose.

“Hon’ble (retd) Justice KA Puj had voluntarily resigned, (and a) vacancy had arisen and was required to be filled in… On November 6, 2020, whereby we (state) extended the time limit (for the commission to complete its inquiry), upon request by the member (Puj), to nine months (that would complete on May 11, 2021. The commission was appointed on August 11, 2020). This issue was taken up by the Hon’ble Supreme Court on November 27, 2020 in a suo motu petition which is still going on. On November 27, 2020, the state government was taken to task in a serious matter like this on the fact that merely because the member (of inquiry commission, Justice KA Puj) asked for time and you (state) gave the time… On having come to know, learned member (KA Puj) desired to resign… we were trying to find out a way on what is to be done… That is how, on December 9, 2020, (the next date of hearing at the SC), and on that context we conveyed a draft notification (mentioning a reconstituted commission headed by (retd) Justice DA Mehta)…,” the AG submitted.
On December 10, Justice KA Puj put in his papers and a vacancy arose, the AG said. “On December 11, 2020, we issued a fresh notification (appointing DA Mehta Commission), filling up that vacancy. It was not a reconstitution by replacement,” he added.

During the hearing, Chief Justice Vikram Nath, addressing the victims’ families, said the inquiry commission is a fact-finding committee and that its report will be placed before the government, whereafter the “government will do whatever it likes to do based on that.”


“You can always provide material to the commission. The commission called you for that. You are trying to control proceedings of the commission by saying that you (Commission) do this, then you do this… No, that is not your (victims’ families’) role,” the Chief Justice said. The matter is expected to be heard further on Thursday.