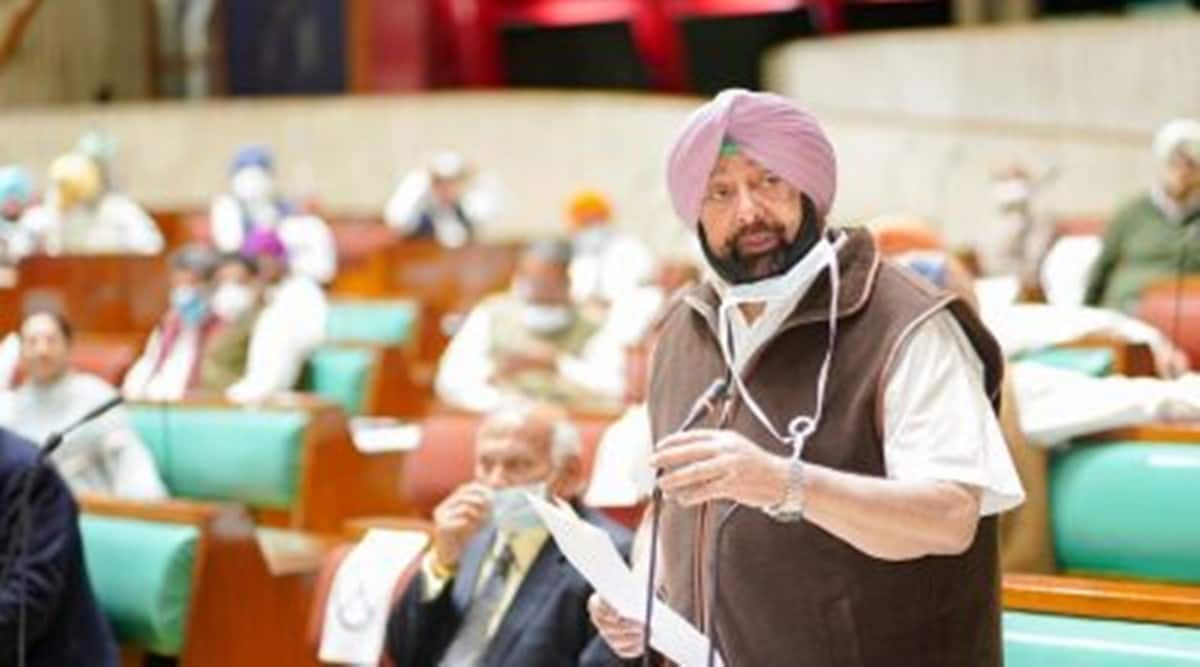 A day after warning that he won’t “go easy on people” if they don’t follow Covid appropriate behaviour, Punjab Chief Minister Amarinder Singh on Friday ordered a slew of restrictions which include closing of all educational institutions till month-end, curbs on cinema and mall capacities and a ban on social gatherings in 11 districts worst affected by the fresh surge in cases.

While curbs across state will be enforced from Saturday, the ban on social gatherings, except for funerals and weddings, which will be allowed with only 20 persons in attendance in the 11 worst affected districts, will come in force from Sunday.

The chief minister also appealed to people to keep social activity in their homes to the bare minimum for the next two weeks to break the transmission chain. Not more than 10 visitors should be entertained in homes, he urged chairing a meeting of the Covid task force here.

As per an official statement, Amarinder also ordered compulsory wearing of face mask, directing police and the health authorities to take all those loitering in public areas without it to the nearest testing facility to ensure that they are not asymptomatic cases. The situation will be reviewed after two weeks, said the chief minister.

He said that from a low of around 200 cases daily and deaths in single digits, Punjab is now witnessing around 2000 cases per day and the fatalities are also increasing. “We have to be prepared for this second surge…We have to be prepared for a long battle…Please be safe, get vaccinated and take care of yourselves even as you shoulder the responsibility of keeping others safe,” he appealed to people.

Dr KK Talwar, who heads the state government’s expert team on coronavirus, informed the CM that the surge in cases appeared to be the result of the opening of schools and colleges, with young asymptomatic people appearing to be spreading the virus.

“All educational institutions, other than medical and nursing colleges, will remain closed till March 31,” the statement said.

In the wake of the spike in cases, the Department of School Education had last week declared preparatory leave for students of all classes.

Restriction of 50 per cent capacity will be there in cinema halls and not more than 100 persons in a mall at any time. In the worst-hit districts, cinemas, multiplexes, restaurants and malls will remain closed on Sundays though home deliveries will be allowed subject to night curfew.

The Punjab Congress too will not hold any political gathering for the next two weeks. The CM appealed to other political parties to keep their gatherings within the prescribed numbers—50 per cent of capacity, subject to a maximum of 100 people in closed and 200 in open spaces. No political gatherings should take place in the most affected districts, he said.

Industries and essential services shall be allowed to function. Barring these, all restrictions shall be strictly enforced, the chief minister directed.

Health and Family Welfare Minister Balbir Sidhu informed the meeting that unlike past when there were more cases in cities, now infection numbers were almost equally divided between urban and rural areas. Amasrinder said rise in cases, particularly in rural areas, is a matter of serious concern.

The CM also asked the Amritsar deputy commissioner to talk to the Shiromani Gurdwara Parbhandak Committee (SGPC) and the management of the Durgiana temple to encourage devotees to wear masks inside the shrines.

Starting next week, one hour of silence will be observed across the state every Saturday, from 11 am to 12 noon, in memory of those who lost their lives to Covid-19.

Directing health officials to ramp up testing to 35,000 per day, he said special focus should be on super spreaders, government employees and teachers in educational institutions.

Rapid antigen testing should be stepped up along with the RT-PCR testing, he ordered while directing contact tracing and testing to be taken up to 30 per positive person.

Dr Talwar said there is no evidence as of now to show that the spike is due to mutant strains as only two cases of new strains have been found in Punjab. The state currently has almost 40 per cent cases from under 30 population, he added.

As of Thursday, Punjab’s infection tally was 2,05,418 while the total fatalities stood at 6,204, according to a medical bulletin.

Wheat procurement put off by 10 days

The wheat procurement in Punjab will start from April 10, instead of April 1, in view of the surge in the Covid-19 cases. The decision was taken at a meeting of the state Covid task force chaired by Chief Minister Captain Amarinder Singh. Food, Civil Supplies & Consumer Affairs Minister Bharat Bhushan Ashu informed the meeting that the department needed more time to make arrangements to ensure safe procurement amid the surge in Covid cases.