In an attempted damage control exercise, AICC communication department head Randeep Surjewala said, "I just spoke to Harish Rawat some minutes ago. He told me some of the friends could not see his statement in the right perspective." 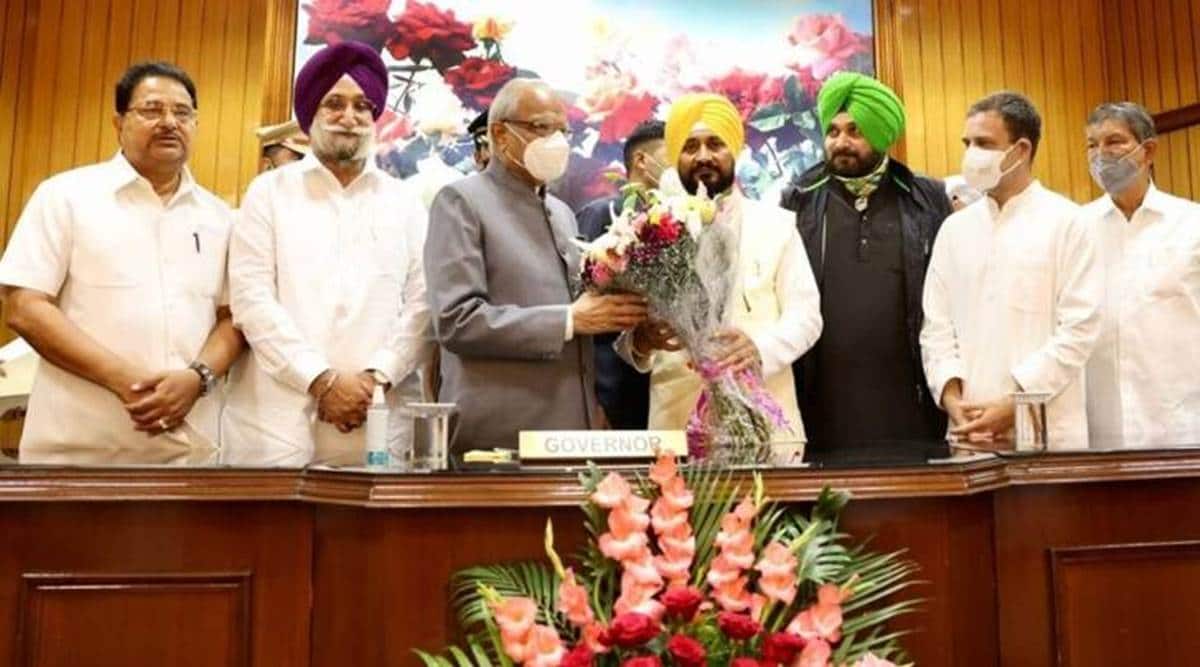 With Congress leader Harish Rawat’s remarks that the forthcoming Assembly elections in Punjab will be fought under the leadership of Navjot Singh Sidhu triggering a political storm, the party high command on Monday stepped in to clear the air, arguing that both Sidhu and newly appointed Chief Minister Charanjit Singh Channi will fight the elections together.

On Sunday, speaking to ANI after Channi was picked for the CM post, Rawat, AICC general secretary in charge of Punjab, had said that while the Congress’s face for the coming Assembly polls in the state will be decided by the Congress president, “given the circumstances, elections will be fought with the Chief Minister’s cabinet under the Punjab Congress Committee, whose chief, Navjot Singh Sidhu, is very popular”.

On Monday, former Punjab PCC chief Sunil Jakhar, whose name was among the CM probables, hit out at Rawat for his remarks, tweeting, “On the swearing-in day of @Charnjit_channi as Chief Minister, Mr Rawats’s statement that “elections will be fought under Sidhu”, is baffling. It’s likely to undermine CM’s authority but also negate the very ‘raison d’être’ of his selection for this position.”

In an attempted damage control exercise, AICC communication department head Randeep Surjewala said, “I just spoke to Harish Rawat some minutes ago. He told me some of the friends could not see his statement in the right perspective.”

“He had said that our chief minister is Charanjit Singh Channi. Our state Congress president is Navjot Singh Sidhu… so Sidhu is heading the organisation and Channi is heading and is the face of the Congress government. They will, with other leaders and our workers, fight the Punjab elections jointly,” Surjewala told reporters. “This is the reality and truth,” he added.

Meanwhile, the cracks in the party over the selection of the Chief Minister widened on Monday with Jakhar taking on Rajya Sabha MP Ambika Soni, whose suggestion of a Sikh CM for the state was seen as having scuttled Jakhar’s chances.

Soni had on Sunday said she had been offered the CM post, but she turned it down since she believed Punjab should have a Sikh as CM.

Without naming Soni, Jakhar said, “The making up of this Hindu vs Sikh issue is an insult to Punjab, which is so secular in character. We have faced so much in the state. It has come back to normal with so much of effort.”

Seeking an apology from “such leaders”, Jakhar said, “You may have a personal enmity, you take it out on me. But please do not put a blot on Punjab’s name… Your real face has been exposed…”

Following Jakhar’s tweet calling Rawat’s remarks “baffling”, in Lucknow, Mayawati, whose BSP has tied up with Shiromani Akali Dal for the upcoming Punjab Assembly polls, took a dig at the Congress, saying she had “come to know through the media that the Assembly elections in Punjab will be fought under a non-Dalit leader”.

“Making a Dalit the CM is nothing but an election stunt… Dalits need to be very alert to the Congress’s double standards. I have full faith that the Dalits of Punjab will not fall for this stunt,” she said.

The BJP, which is on the backfoot in the state owing to the farm agitation, also hit out at the Congress. “For seven decades, the Congress sidelined Dalits, who constitute 34 per cent of the population. They are now trying to use them by appointing a Dalit as a night-watchman,” said BJP national general secretary Tarun Chugh.

Hitting back at the BJP, Akali Dal, BSP and AAP, Surjewala said they have “unwarrantedly, shamelessly and regrettably” resorted to attacking the candidature of Channi.