Fourteen villagers were arrested and booked under several sections, including criminal conspiracy, attempt to murder, rioting and sections of the Arms Act as well. 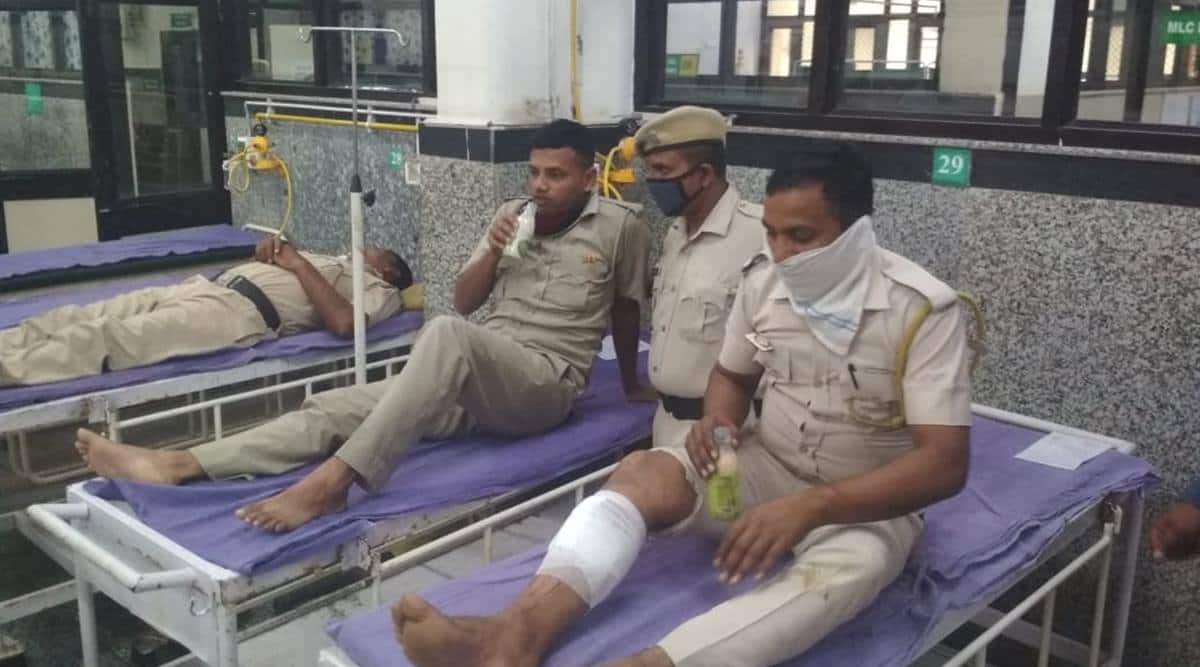 At least 16 police officials, including three women, were injured in violence that broke out between hundreds of villagers protesting against licensed mining at Rattewali village of Barwala in Panchkula and the district police around 2 pm on Tuesday. Three male police officials suffered serious head injuries in the attack by the villagers. The police also fired at least four rounds in air to scare away the protesters.

Fourteen villagers were arrested and booked under several sections, including criminal conspiracy, attempt to murder, rioting and sections of the Arms Act as well.

The residents of Rattewali village had been protesting against permitted mining going on in their village for more than a month. The mining was paused in early October after protests and an inquiry in the matter was initiated.

The panel which probed the matter fined the firm with Rs 53 lakh for digging more than the permissible limit. The contractor deposited Rs 26 lakh on October 30 and resumed mining work again, which also led to resumption of protests.

A press statement issued by the police department of Panchkula said, “Police officials had accompanied the duty magistrate appointed to clear out the protesters as per orders, so licensed mining could begin. The villagers were also being informed about it. It was at the behest of some anti-social elements that the police teams were attacked by the villagers and stones were pelted which injured at least 16 police officials of the department.”

Deputy Commissioner Mukesh Kumar Ahuja told The Indian Express, “It was all part of the legal process. We had formed a committee to look into the allegations being made by the villagers against illegal mining in the area by the contractor. We had even taken representatives from the headquarters and made a final report. After the report, mining activity was suspended for a while. Legal action was taken by headquarter, whatever it was. The legal mining was then resumed as per their orders. Our work is to ensure no one interferes in the legal process. If they do, we take action as per law.”

As many as 14 villagers, who had been picked up by the police, were booked under several sections, including 114 (abettor present when offence is committed), 147 (guilty of rioting), 148 (rioting, armed with deadly weapon), 149 (unlawful assembly), 186 (obstructing public servant in discharge of public functions), 188 (disobedience to order by public servant), 283 (danger or obstruction in public way or line of navigation), 307 (attempt to murder), 332 (voluntarily causing hurt), 341 (wrongful confinement), 353 (assault or criminal force to deter public servant from discharge of his duty), 379 (theft), 384 (extortion), 427 (mischief causing damage), 270 (malignant act likely to spread infection of disease dangerous to life), 271 (disobedience to quarantine rule) and 120 B (criminal conspiracy) of the Indian Penal Code. They have also been booked under sections of the Arms Act and the PDPP Act.

While the police claim that the protesters became violent when talks were on, the villagers have another story to tell.

“At least 200 of us, including old men, women and children, were sitting on protest. The police in huge numbers reached us around 1 pm and asked ‘dande khaane hain ya arrest hona hai.’ We told them we were ready to be arrested and almost 20 people went ahead and voluntarily sat in their bus. It was after the police officials started dragging and beating our women, children and senior citizens not only from the site of protest but also from inside the village that some lost temper and a bout started. Before we knew the villagers were pelting stones. The claims of us being in possession of any weapons and this being a preconceived conspiracy are false. We agree we are at fault as well but they have always come with an intent to demean us in our own land,” said a resident of the village who wanted to remain anonymous.

A police force of 150 officials, including reserves from Ambala and Yamunanagar, had reached the village on Tuesday. Even the women, children of the village pelted stones on the police officials. Four rounds were also fired into the air in an attempt to save themselves from the violent protesters as the police had gone in without any riot gear, including water cannons or tear gas, said sources in the police department.

The villagers have been protesting against mining citing various issues. “The mining is killing our land, our village. The village falls in a sensitive zone and the mining is making it even weaker. Cracks have been noticed in the mountains. Our tubewells are running out of water because of such activities and yet we have been robbed of our right to protest. The contractor has criminals on his payroll who man his mining activities and eve tease and molest our women. They have remained inside since such activities have begun in the village. The government does not care about us,” added another villager, who has been at the forefront of the protests by the villagers.
On the concerns of the villagers, Ahuja said, “Before the allotment, public hearings are ensured from the villagers and only then a decision is taken. If they have voiced their concerns, they must have been taken into consideration by the committee which allots the space for mining activity after public hearing. Water levels are not affected due to mining as the laws state that at least two metres of safety margin must be ensured above groundwater table.”

The Haryana government had in 2017 conducted an e-auction for grant of mining contracts of boulder, gravel and sand mining blocks in Panchkula districts. The contract for Rattewali mining had been won by M/s Tirupati Roadways through its proprietor Lakhmir Singh Sabharwal who had offered a bid of more than Rs 11.72 crore against a reserve price of Rs 8.18 crore for a period of seven years.

The notice by the mines and geology department of Haryana had allotted a tentative area of 45 hectares in Panchkula to the said company.