While reacting to The Indian Express story on how Rs 34 crore was being spent only on clearing half of the waste, the AAP said that the garbage dump clearing was a farce. They demanded a detailed investigation into the murky affair by an independent agency. 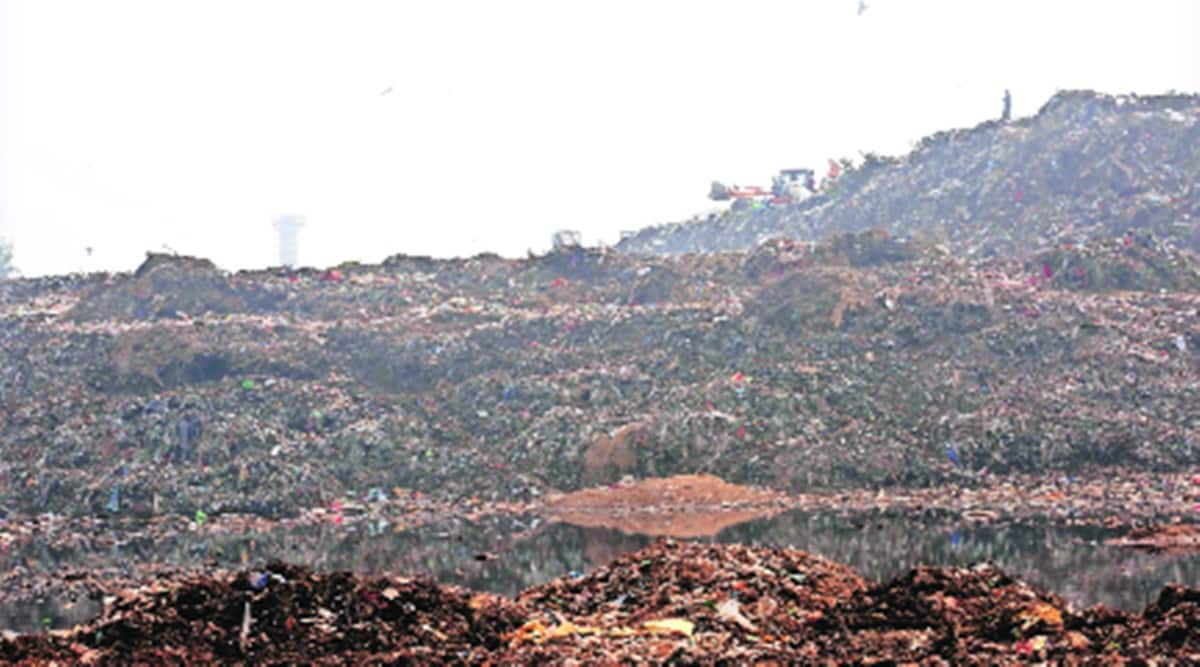 Only 19 per cent of ‘Smart’ Chandigarh’s waste is being processed. The rest of it is being dumped into the dumping ground — the area which is being cleared of old waste at a cost of Rs 34 crore.

Of the 425 metric tonnes generated as of now by Chandigarh on a daily basis, only 80 metric tonnes are being processed and the entire remaining chunk is being dumped into the dumping ground.

Even as the civic body is biomining old waste prior to 2005, new waste is piling up every day.

The sole garbage processing plant was taken over by the Municipal Corporation in June last year from the Jaypee group owing to the fact that the company was not processing the waste and dumping most of it at the ground. Due to the long legal battle then and he company’s inefficient working, the MC decided to terminate the agreement and take over the plant. Workers working at the company were hired by the MC. There are around 80 workers.

Medical Officer of Health Dr Amrit Warring said that they are paying Rs 12,000 each to the worker there.

“We have no other option but to dump. At least they are processing 80 metric tonnes for us,” the MOH said.

So what is the use of spending Rs 34 crore when more and more is being piled up? A senior officer said, “We don’t have any other alternative because the plant is not working to its optimum capacity. Earlier, only 50 metric tonnes were being processed. Now at least we have raised the processing to 80 metric tonnes.”

In the last House meeting, the civic body had approved calling expression of interest from private firm to upgrade the garbage processing plant. IIT-Roorkee has already been roped in to give its observations and it had further recommended setting up/ upgradation of plant.

Congress councillor Devinder Singh Babla said that “dumping ground has been made a means of money-minting”.

Following an MoU signed in 2005 and 2008, Jaypee Group had set up a garbage processing plant at Dadumajra. Ever since the BJP came to power, it became a tussle between both the political parties since the company was hired during the Congress regime.

According to the agreement signed between the Jaypee Group and the MC, about 10 acres of land was provided to the company for setting up the plant at a nominal lease rent of Re 1 per square metre per annum for a period of 30 years. However, the company went into a legal battle later demanding tipping fee from the civic body, even as the MC contended that the agreement signed between them did not mention the payment of the tipping fee.

Meanwhile, the civic body argued that the company was not processing the city’s waste and most of it was going to the dumping ground which was an environmental concern.

The civic body had been in a legal battle with the garbage processing company. Finally, the MC took over the plant on June 20, 2020.

While reacting to The Indian Express story on how Rs 34 crore was being spent only on clearing half of the waste, the AAP said that the garbage dump clearing was a farce. The party demanded a detailed investigation into the whole murky affair by an independent agency which should verify how the whole garbage clearing process is being handled by the company.

“At the time of granting work of garbage dump clearing at a whopping cost of Rs 34 crore to M/s SMS Ltd, all press statements from authorities claimed that the entire dump is about 5 lac MT and will be cleared in 18 months’ time, so that the dump land can be put to some use and residents of the area can get rid of poisonous air for all the times to come. No official or Member of Parliament made any statement that only half of the total dump will be got cleared,” the statement said.

It was added, “Now the administration will gear up to waste another Rs 35 crore to clear the remaining garbage and this vicious circle will keep going on due to lack of vision on the part of MC officials.”

Garg said, “Why can’t the administration find out the wholesome solution to the problem? Its lack of vision is evident from its failure to run the garbage processing plant, taken over from Jaypee company, with much fanfare.”