Mumbai, Maharashtra latest live news updates: With schools reopening earlier this month and colleges set to open next week, Mumbai Railways have decided to allow teenagers under 18 years of age to travel by local trains despite them not being vaccinated. Mumbai News Live Updates: Covid-19 cases, which have been gradually increasing in Mumbai since the festive season began with Ganesh Chaturthi, hit 5,317 on Thursday, the highest since July 26. Officials from Brihanmumbai Municipal Corporation’s health department said they are anticipating a small spike post-Dussehra as more people step out for shopping and meeting friends and family. However, officials said the rise in cases is not a cause for concern as the situation is under control, and most of Mumbai’s population has taken at least one vaccine dose, and nearly half have taken both doses.

Meanwhile, with schools reopening earlier this month and colleges set to open next week, Mumbai Railways have decided to allow teenagers under 18 years of age to travel by local trains despite them not being vaccinated. The move comes days after the state government issued an order expanding the definition of fully vaccinated persons to include persons less than 18 years of age and those who have medical conditions which prohibit them from taking the Covid-19 vaccines.

The southwest monsoon withdrew over Mumbai on Thursday, six days after its normal date of withdrawal of October 8. The monsoon withdrawal has been completed across the state, said the India Meteorological Department (IMD).The withdrawal line, as of Thursday afternoon, continued to persist over Vengurla in the southernmost part of the Konkan coast and was expected to withdraw entirely by the day.

Also, after hearing arguments over two days, a special court on Thursday reserved its order till next week on the bail applications of Aryan Khan, the son of Bollywood actor Shah Rukh Khan, his friend Arbaaz Merchant and model Munmun Dhamecha, arrested by the Narcotics Control Bureau (NCB) on October 3. 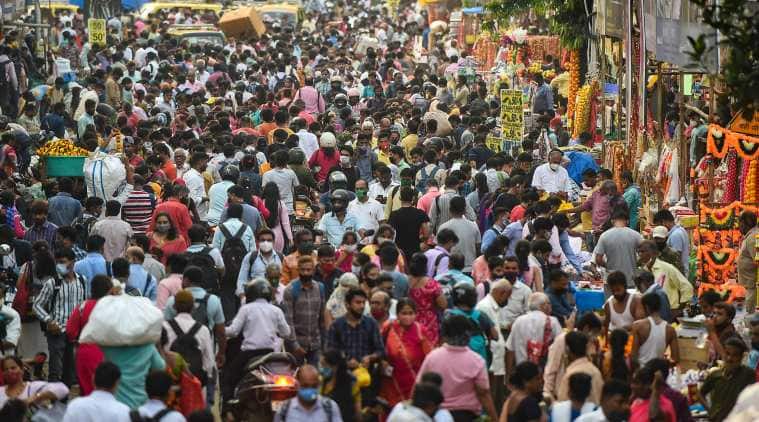 Mumbai: People at Dadar market on the eve of Dussehra festival, amid the ongoing coronavirus pandemic, in Mumbai, Thursday, Oct. 14, 2021.(PTI Photo/Kunal Patil)

Ahead of political rallies on Dussehra, the state government has relaxed the upper limit of 200 attendees at gatherings and functions in closed spaces. However, the order that the gatherings should be organized with 50 per cent capacity of the closed spaces remains.

On Friday, the Shiv Sena will hold its annual Dussehra rally in Shanmukhanand hall with 1,300 people in attendance, while BJP leader Pankaja Munde will address a rally at Bhagwangad in Beed district. RSS chief Mohan Bhagwat will also address Swayamsevaks on Dussehra.

READ | Maharashtra: Ahead of Dussehra, upper limit for rallies in closed spaces relaxed

The Maharashtra home department has given in-principle approval to scrapping the post of Police Naik so that police constables can go up to the rank of Police Sub-Inspector by the time they retire. State Home Minister Dilip Walse Patil tweeted that in a meeting on Thursday, the in-principle nod was given to the proposal submitted by the DGP.

Currently, a police officer who joins the force as a constable can rise up to an Assistant Sub-Inspector (ASI) rank by the time they retire. They go from constable to police naik rank to head constable to ASI rank, when they generally retire after more than 30 years of service.

On October 15, 1932, industrialist and aviator JRD Tata undertook the first-ever flight from Karachi to Mumbai. Eighty nine years on, Borivali-based pilot Aarohi Pandit, who flew solo over the Atlantic in 2019 in her single-engine aircraft, is set to replicate the feat on Friday, albeit from Bhuj, the closest airfield in India to Karachi.

Speaking to The Indian Express, Pandit, 25, said, “I will be taking off from Bhuj between 9 am and 10 am and will reach Mumbai by 4 pm with a halt at Ahmedabad for refuelling.”