Shortage of Amphotericin B injections, in some cases dearth of specialist doctors, is forcing patients for inter-city and inter-state travel to seek mucormycosis treatment. In the process, the treatment cost is scaling up to lakhs. 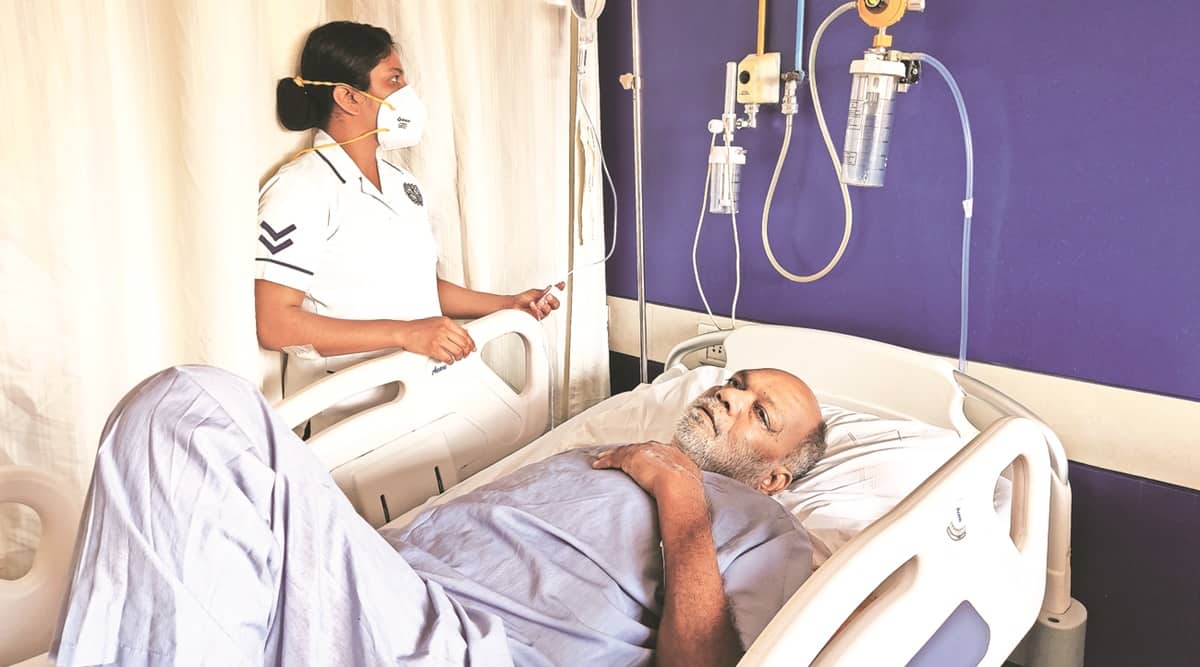 Mohd Manzoor Hussain (68), a Srinagar resident, faced a difficult past month, first coping with Covid, then his wife’s death and later with his mucormycosis. Unable to get access to surgical intervention to scrape off the fungus in Srinagar, the retired forest officer decided to travel to Mumbai for treatment.

On Saturday, sitting in doctor’s cabin after discharge, he smiled and said, “I just want to go home. It’s pleasant in Kashmir. Mumbai is very hot.”

Shortage of Amphotericin B injections, in some cases dearth of specialist doctors, is forcing patients for inter-city and inter-state travel to seek mucormycosis treatment. In the process, the treatment cost is scaling up to lakhs.

Hussain’s entire family was infected with Covid in Srinagar. He lost his wife two days after he was discharged.

Within days, he developed a gnawing tooth ache. For the next seven days, Hussain made multiple visits to private hospitals and dentist.

The fungus had grown in sinus, mouth and around eyebrows by the time an endoscopy hinted at mucormycosis. “I was readmitted in a private hospital and slated for a surgery. But the surgery kept getting delayed. Eventually, someone at the hospital advised me to seek treatment in Delhi or Pune,” he added.

On May 6, Hussain flew to Mumbai as a friend arranged for a bed at Bombay hospital. The next morning, a surgery to remove the black fungus was undertaken.

Consultant physician Dr Gautam Bhansali said the fungus had spread to most part of his face. “But thankfully, it had not reached eyes or brain,” he added. Bhansali said Hussain was administered an unusually high dose of 500 mg steroids during his Covid treatment in Srinagar. The usual dosage is 40-50 mg per day.

“We still don’t understand the root cause of mucormycosis. It could be steroids, diabetes or contamination, but such a rise of it in India is perplexing,” Bhansali said. Bombay hospital has treated 27 mucomycorsis cases. Of them, 10 came from outside Mumbai.

In KEM hospital, a special 60-bed ward has been created for mucormycosis patients. It is already full. “We have many patients from outside the city,” said Assistant Medical Officer Dr Pravin Bangar.

While lack of specialised treatment in Srinagar forced the travel for Hussain, for Chetan Kumar Dholakia (52), shortage of anti-fungal medication Amphotericin B forced him to travel from Rajkot to Mumbai. “Every morning, I used to stand in a queue of government centre to buy Amphoterecin. Sometimes by the time my turn came, the medicines stock was over,” said Dholakia’s son Sumit.

Sumit said there is a crisis of injection in Gujarat. Three days ago, the family booked train tickets and travelled to Mumbai for Dholakia’s treatment. At least five members of the family have accompanied to assist, in case they need to look around for Amphoterecin vials in Mumbai.

“We came here because we wanted proper treatment. In Gujarat, one surgery was done to remove the fungus but doctors had no time to pay attention. In Mumbai, my father required a second surgery,” Sumit added.

Subhash Pacharia (62) was quick to decide. He travelled to Mumbai last week within a day of being diagnosed with mucormycosis. His son said their home district Jhunjhunu has limited specialisation.

Mucormycosis can require a multi-speciality team, including ENT specialist, neurosurgeon, ophthalmologist, general surgeon, physician and anaesthetist, if it spreads to brain and face.

“There was no MRI or CT scan facility, doctors could not even collect sample to culture the fungus. They asked us to go to Jaipur, but we thought Mumbai was a better option. We came to Bombay hospital,” said Pacharia’s son Abhishek.
Pacharia requires five Amphoterecin vials each day. Abhishek added: “I had to go to Thane civil hospital to buy five vials. A family member had to buy Amphoterecin in black market in Vapi. It is a huge challenge.”

Dr Avinash Supe, chairman of the death audit committee in Maharashtra, said Mumbai has recorded 28 mucormycosis deaths. “Most are critical by the time they reach here. It is difficult to salvage them,” he said.

In the past few days, he referred three patients from Ratnagiri, Nashik and Sangli to Mumbai for treatment. Of 100 cases, 30 to 40 patients of Covid-associated mucormycosis die. As per the data, released by the Ministry of Chemicals and Fertilizers, India has 8,848 mucormycosis cases till May 22.