IGNCA member-secretary Sachidanand Joshi says the centre would be opened for public activities on August 1. The space might have crunched from a sprawling 27 acres to the five acres of Hotel Janpath, but the Indira Gandhi National Centre for the Arts (IGNCA) is fully functional at its new location. As one enters IGNCA, now moved to the erstwhile hotel less than 2 km away from its earlier, there is no trace of what it was – be it the NDMC signboard outside the building or the artistically decorated main entrance or ornamented interior walls.

Earlier this month, the government inaugurated the new premises at the five-storey building, from where IGNCA is expected to function for the next two-three years, till it moves to its permanent location at Jamnagar House on the India Gate circle. While many of the cartons containing infinite number of books, manuscripts and textile snatches still remain unopened, the administrative and academic departments – such as Kala Kosa, Janpada Sampada, Cultural Informatics and Conservation Lab — started their activities in the first week itself. IGNCA member-secretary Sachidanand Joshi says the centre would be opened for public activities on August 1. “While all our administrative and academic activities haven’t stopped, we shall open the space for the general public with exhibitions and events from next month.”

Even though there is only one exhibition space as of now, Joshi says in the days to come, they shall be reassigning other spaces to create more spots where displays could be held. The entrance has the souvenir shop on one side, and the cafe on the other. Joshi adds that even as IGNCA’s own offices shut at 7pm, they are looking to turn Swasti, the cafe, into a separate entity – with its own entrance – so that people can use this space even beyond the institution’s working hours. 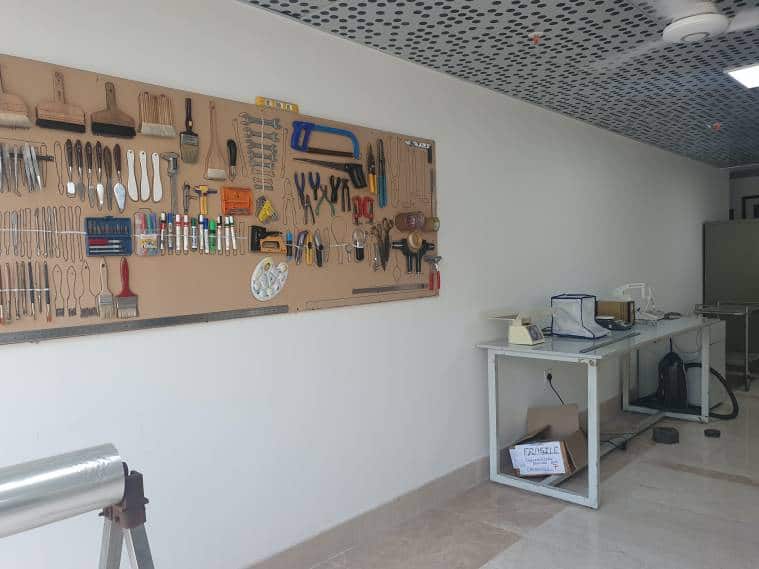 The corridors are adorned with traditional paintings and masks from IGNCA’s repository, but the double-storey library building is currently a work-in-progress, with cartons being unpacked and books being rearranged. It will be ready for visitors by August 1, when IGNCA also plans to launch an exhibition commemorating 75 years of Independence.

However, the conservation lab looks much more equipped and busy than before, moving from a dingy basement at the previous location to the ventilated and bright first floor, with a glass facade overlooking a lawn space. A patch in the premises has been turned into a 100-seater amphitheatre while there is already a fully functional auditorium and several conference rooms have been created. Overall, there is no trace of this being a hotel once upon a time, wherein walls have also been remodelled or removed to create suitable enclosed spaces.

What’s missing though are the sprawling lawns of the earlier premises, and the landmark Mati Ghar. Completed in 1989 (four years after IGNCA was inaugurated), on a budget of Rs 9 lakh, the iconic earth blocks structure was meant to stand only for a year. Nearly 30 years later, it remained the darling space for many artists, who have showcased exhibitions here. Joshi says they have created ample terrace spaces on the first floor to hold book readings and musical evenings, from next month, to make up for the lawns. Sources in the Ministry of Culture say the tendering for the new IGNCA campus at the 15-acre space in Jamnagar House starts next month, and the tentative deadline for its completion is June 2024.

The IGNCA has been shifted out from its sprawling campus to make way for three ministry buildings, as part of the Central Vista project. The Janpath Hotel was an India Tourism Development Corporation-owned enterprise before it became an office for the Ministry of Tourism. It was handed over to the Ministry of Housing and Urban Affairs in late 2017.