The RSS-affiliated National Democratic Teachers’ Front (NDTF) Friday distanced itself from a comment made by a former president of the outfit regarding the Kerala State Board.

Rakesh Pandey, a Physics teacher at Kirori Mal College, had written in a Facebook post: “A college had to admit 26 students in a course having 20 seats only because they all had 100 per cent marks from Kerala board. For last few years, Kerala board is implementing #Marksjihad.” 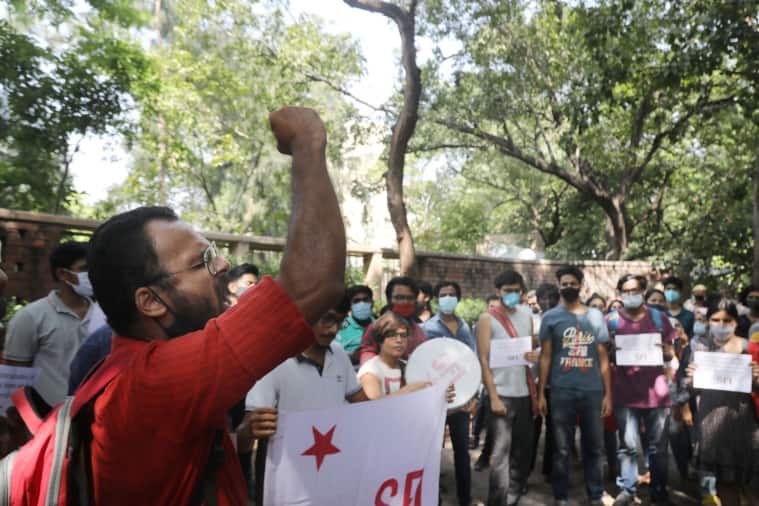 Protests were held on campus Friday with Left organisations Students’ Federation of India (SFI) and the All India Students’ Association (AISA), as well as National Students’ Union of India, condemning Pandey’s remarks. The Akhil Bharatiya Vidyarthi Parishad-led DU Students’ Union, meanwhile, burnt an effigy of the DU administration saying the inflated board marking was causing disparity in admissions.

“NDTF has nothing to do with views expressed by any individual on any State Secondary Board. NDTF unambiguously dissociates itself from any objectionable statement,” it added.

Speaking at the protest at the Arts Faculty Friday, SFI DU Convenor Akhil K M said, “This incident cannot be seen in isolation, students coming from Bihar and Haryana to DU had been the target of xenophobes in the 1990s and 2000s. DU is a central university and must welcome students from across the country with open arms.”

AISA protested against Pandey at KMC. Ritwik Raj, secretary of AISA DU, said, “How can this person be trusted to stay fair with the class when he is spewing venom before even meeting the students? This RSS rhetoric of Muslim population, their vulgarised use of the word ‘jihad’ in attempt to label Muslims as terrorists must be resisted. DU is a central university that works on the principles of the Constitution and we will tolerate no compromise with the ideal of secularism in the university.” NSUI also protested outside KMC. Under the leadership of state president Kunal Sehrawat, a delegation met the principal and gave a memorandum demanding “strict action” against Pandey. They also burnt his photo.

Meanwhile, the ABVP demanded that the DU administration “act upon the unreasonable hike in cut-offs due to inflated marking causing disparity amongst students” and “devise a mechanism of moderation/normalisation of marks for all state boards of the country”.

They’ve also demanded that the admission procedure be stopped immediately till the matter is resolved.