In his interaction with the families of Shubham Mishra and Hari Om Mishra, Law Minister Pathak promised to fulfil their demands, including the issuance of “arms licence, status of BJP martyr and a fair investigation in their killings”. 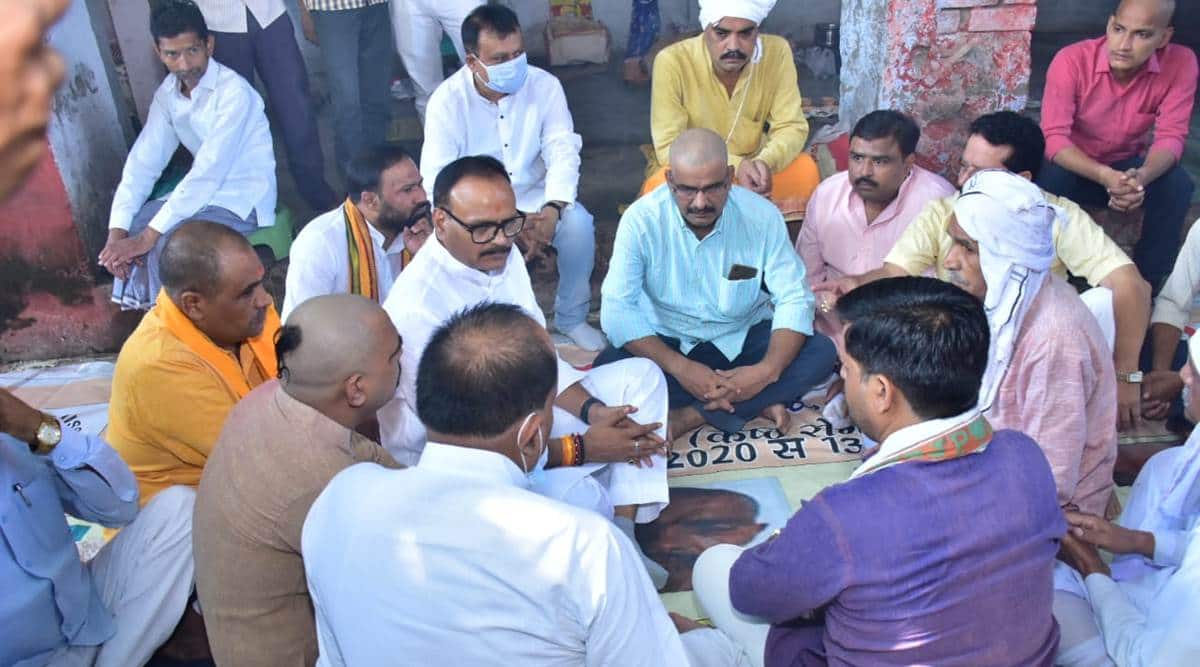 TEN DAYS after four farmers were killed in Lakhimpur Kheri when a group of farm protesters were hit by a convoy of vehicles, including one owned by Union MoS Ajay Mishra, and four others lost their lives in the violence that followed, UP Law Minister Brijesh Pathak Wednesday became the first senior BJP leader to visit the area.

But the Minister left after visiting the families of two of those killed: BJP worker Shubham Mishra and MoS Ajay Mishra’s driver Hari Om Mishra. He did not meet the families of four others from the area who lost their lives: farmers Nachhattar Singh and Lovepreet Singh, BJP worker Shyam Sunder Nishad, and journalist Raman Kashyap.

The two other farmers who were killed, Gurvinder Singh and Diljeet Singh, were from the neighbouring Bahraich district.

Opposition parties, however, criticised Pathak’s visit and described it as “an attempt to divert attention” from the incident. Bhartiya Kisan Union (BKU) leader Rakesh Tikait warned that it “may be a bit too early for a BJP Minister to visit the families” of the farmers killed. “There may be a reaction from the families, so if someone has to go, permission should be taken from the families,” he said.

BJP district chief Sunil Singh said the family of Nishad, which belongs to an OBC community, has been assured that another delegation led by the party’s state general secretary Amar Pal Maurya would visit Lakhimpur Kheri on October 16. He said Maurya’s delegation would also visit the family of Kashyap.

The families of Nachhattar Singh and Lovepreet Singh were not available for comment. Guru Sevak, the brother of 18-year-old Gurvinder Singh in Bahraich, said the Minister “should not come for politics, but to share our sorrow”. “If he wants to come, he should remove his party’s flag and come,” he said.

In his interaction with the families of Shubham Mishra and Hari Om Mishra, Law Minister Pathak promised to fulfil their demands, including the issuance of “arms licence, status of BJP martyr and a fair investigation in their killings”.

Asked about his visit, Pathak told The Indian Express: “I visited the families to offer condolences and assure them of a fair investigation. The families had some demands, including for a weapon licence as there is a security threat. I promised them that it would be looked into as per the norms.”

Speaking to The Indian Express on Wednesday afternoon, the family of Shyam Sunder Nishad, who was the BJP ‘mandal mantri’ for the Singahi area in Lakhimpur Kheri, said no one contacted them regarding Pathak’s visit to the area. “No Minister has come to meet us, and we have not been given any information about any Minister’s visit by local officials. We would like to meet whoever wants to share our grief,” said Nishad’s brother Sanjay.

Kashyap’s family also said that no one had contacted them about the Minister’s visit. “We are waiting for people to come and share our grief. He is a Minister, so he could have met us. No one from the administration told us anything about any visit,” said Kashyap’s brother Pawan.

Kashyap’s family has claimed that he was also killed after being hit by the convoy. Apart from his father, Kashyap is survived by his wife Aradhna (32) and their two children, aged 11 and 3.

In the Shivpuri area, where BJP worker Shubham Mishra (26) hailed from, his uncle Anoop Mishra said: “The Law Minister met us at the venue for the daswan (10th day since death). He wanted to meet us at home but we were at the mourning site. The Minister told us that our son will be given the status of martyr by the BJP.”

According to him, Pathak also assured the family that action will be taken against those responsible for his death. “He assured us that our family will be looked after, and that our daughter-in-law will get a job,” the uncle said.

Shubham Mishra, who was a businessman, is survived by his wife Rekha and one-year-old daughter Angel.

Pathak also met the family of Hari Om Mishra (27) in Parsehra village. “He promised us that our family will be looked after. He also assured us that the BJP will give Hari Om the status of a martyr,” Hari Om’s cousin, Rajnikant Mishra, said.

Asked about Pathak’s visit, Congress state chief Ajay Kumar Lallu, who had visited Lakhimpur Kheri along with Priyanka Gandhi, said, “This is now just an attempt by the Government to divert the focus and course of investigation. This government protects criminals and such visits, 10 days after the incident, shows that they have no intention of ensuring justice for the victims.”

Samajwadi Party spokesperson Rajendra Chaudhary said: “This visit has no meaning and is just a formality after so much pressure has been built by the Opposition. The government wants to divert attention from the incident.”