RSS and BJP leaders said the area's MLA, Congress leader DK Shivakumar, was "supporting plans of forced conversion of Hindus to Christianity" by granting land for the statue. 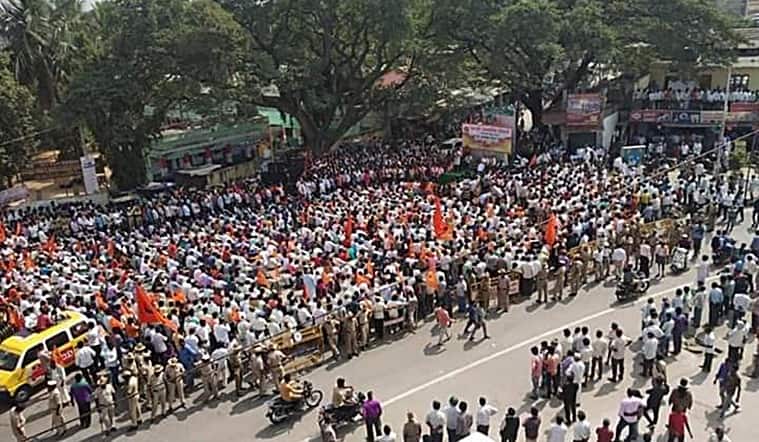 A massive rally of Hindutva outfits, supported by the BJP and RSS, was held in Kanakapura town of Ramanagara district in Karnataka Monday to oppose the building of a Jesus Christ statue by local villagers.

Participants of the ‘Kanakapura Chalo’ rally, organised by Hindu Jagarana Vedike, accused the area’s MLA, Congress leader D K Shivakumar, of indulging in “appeasement politics” by laying the foundation stone for the 114-foot statue on Christmas 2019. The statue is to be built in Kapalabetta hill in Harobele village.

“The people here do not want a Christ statue. Instead, can’t we erect a statue of Pejawar Swami, Basaveshwara, Balagangadharanatha Swami or someone else who has contributed for this region and nation?” senior RSS leader Kalladka Prabhakar Bhat said, addressing protesters during the rally.

Incidentally, Bhat and three others were recently booked by the Karnataka police for making students of a Mangaluru school re-enact the demolition of the Babri Masjid as part of its Sports Day programme.

Further criticising Shivakumar, Bhat said, “This statue is being built only to appease his party leader Sonia Gandhi. While you accuse us of disturbing peace in this region, it is ironic that you are trying to break the fabric of the Hindu community.”

Shivakumar had earlier said the Monday rally was an attempt to “disturb public harmony” in Kanakapura. “The people of Kanakapura have been living in harmony for centuries now. The rally is a conspiracy by communal forces to disturb this and is backed by politically motivated forces. I appeal to the people of Kanakapura not to be provoked and let any untoward incident happen. We are known for peace and amenity,” Shivakumar had said in a statement. 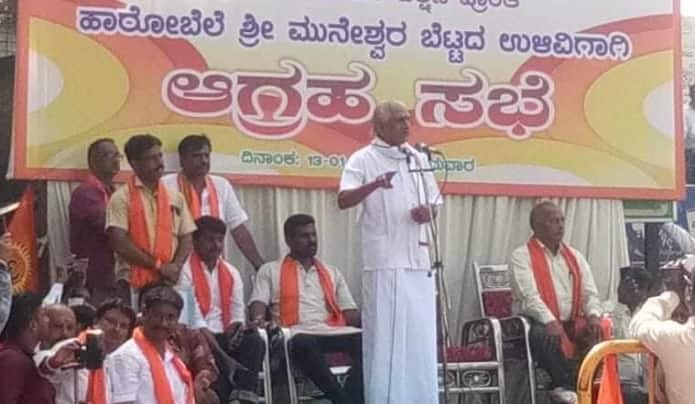 The rally began from Ayyappa Swamy Temple and concluded with a public meeting in front of the Ashoka Pillar in Channabasappa Circle in the town.

He said, “The Bande brothers — Shivakumar and D K Suresh, Bangalore Rural Congress Lok Sabha MP — have now become Vatican brothers and are supporting plans of forced conversion of Hindus in the area to Christianity. Granting land to erect a Christ statue where Hindu gods were worshipped for years in itself proves their motive.”

The BJP has also said the 10-acre land was specified for cattle-grazing, and Shivakumar had illegally allowed its use for the statue.

Reacting to the allegations, Shivakumar said the decision to erect the statue was not his but of the people in the area. “It is a decision taken by villagers of the Christian community. As a duty-bound legislator, I am supporting the good and simple villagers who have been with us as brothers and sisters. The land and other documents given to the trust to raise the statue are legal, sanctioned by the state government.”

“When I was the Culture Minister, a project for a statue of Balagangadharanatha Swamiji was approved and Rs 25 crore allocated for it under the Kumaraswamy government. Another statue of Shivakumara Swamiji has also been sanctioned on similar grazing lands. All this is done to keep communal harmony,” Shivakumar added.

However, an investigation has been initiated into the Jesus statue by revenue minister R Ashoka. Earlier last week, two notices were sent by revenue officers to Harobele Kapalabetta Development Trust to furnish details related to the land on which the statue is being built.

For all the latest Bangalore News, download Indian Express App