Delhi has registered a drastic improvement in its air quality in the last couple of days. The PM2.5 concentration was in the moderate and poor categories on November 16 and 17. This was a welcome relief after 25 days of severe and very poor PM2.5 concentration days in a row. What explains this sudden improvement? Does it mean that the rest of the winter season will be pollution-free?

An HT analysis of historical trends suggests that Delhi’s pollution status depends on a mix of meteorological, outside (such as farm fires) and local factors. As the importance of farm fires will come down for the rest of the season — the process of stubble burning is almost over – the pollution situation will depend on the first and the third factors. As temperatures drop further, air quality is expected to worsen again after what is at best a temporary respite.

1. How bad was pollution this year?

In terms of the seven-day average of PM2.5 concentration, the first two weeks of November were much worse this year than November 2019 and slightly worse than November 2018. A long-term comparison shows that air pollution usually starts rising in October, peaks sometime in late October or early November, and then comes down before rising again in December. . 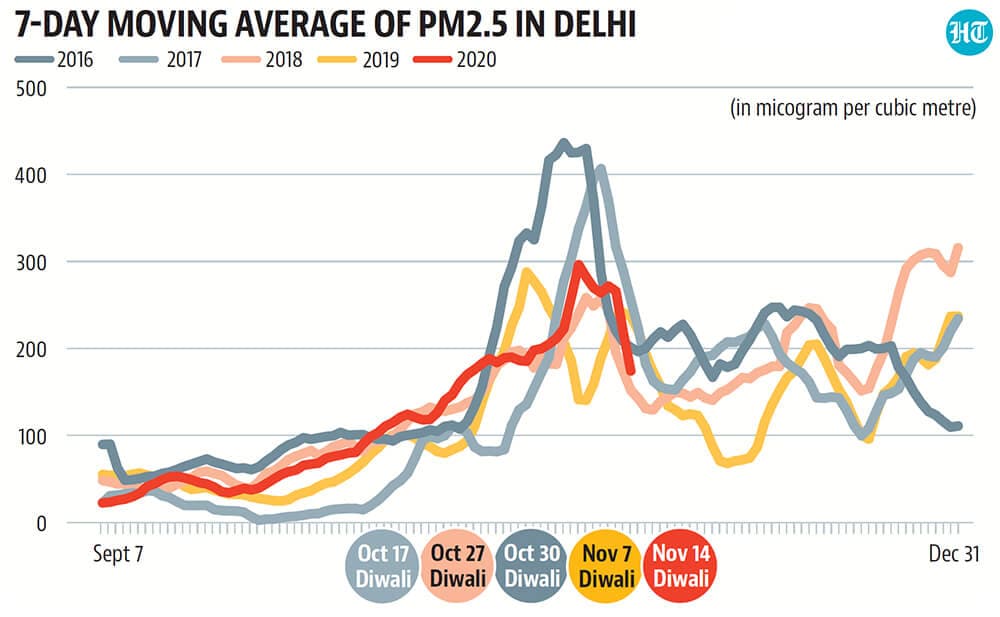 To be sure, the average PM2.5 concentrations used in this analysis are based on just three of 38 air quality stations for which the Central Pollution Control Board (CPCB) provides historical data on its website. This is because only these three stations; IHBAS Dilshad Garden, RK Puram and Shaidpur, have consistent data available for the September to November 17 period from 2016 onwards.

2. Is there a direct correlation between farm fires and pollution in Delhi?

The number of fires detected in Punjab and Haryana this year between September and November 17 were 77,703, according to satellite data. This number was 46,649 in 2019, and 60,536 in 2018. The 2020 number is the third highest since 2012, the earliest period for which comparable data is available. The number of fires detected in the same period was 97,985 in 2016 and 79,511 in 2014. The fires did, however, start earlier this year. The 1,111 fires detected in September are the highest for the month since 2012. The role played by farm fires in air quality in Delhi can, however, be assessed when we have comparable air quality data, which is available from 2016. A seven-day rolling average of farm fires since 2016 shows that it is only in 2016 that farm fires were almost consistently higher than in 2020, except a brief period in late October when the 2017 figures were also higher than those in 2020.

Although there is no long-term data on this, the System of Air Quality and Weather Forecasting And Research (SAFAR) publishes a chart on contribution of farm fires to Delhi’s air pollution during the stubble burning period. This chart shows that the highest contribution that farm fires have made to Delhi’s air pollution (42%) this season was on November 5. HT’s analysis shows 5,239 fires on the day in Punjab and Haryana, the second-highest number for a day this season. On the day the highest number of fires was recorded (5,316 on November 7), the contribution of farm fires was 32%. 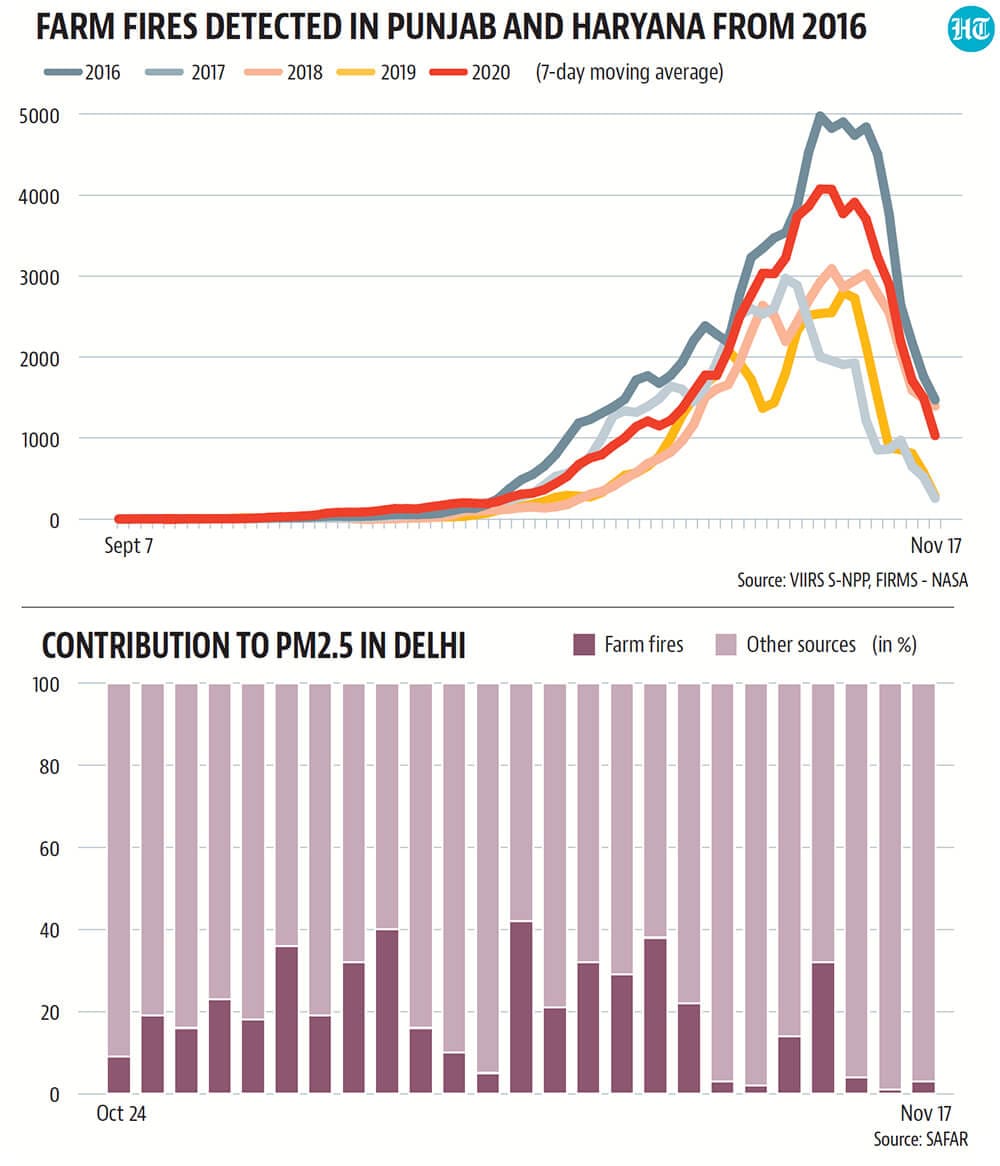 Delhi’s air improved to moderate quality after two days of Diwali this year. A comparison since 2016 shows that this is an extremely rare event. What explains this? The answer is rain and wind. Delhi received a rainfall of 1.2 millimetres a day after Diwali, something that has never happened since 2016. Even though the wind speed was lower than what it was in earlier years, it was blowing from east to west (Delhi to Punjab) rather than west to east. This means that Delhi was spared the limited impact of even the reduced farm fires in Punjab and Haryana.

And one of the biggest reasons why air quality worsened relatively earlier this year was the lack of rains and low wind speed in Delhi from September onwards. The 20.4 mm rainfall recorded in Delhi in September is lower than all the years since 2016. Unless meteorology continues to favour Delhi, the improvement in AQI will not stay. Then there are local factors — the burning of bio-mass, traffic, industrial pollution, and dust from construction activities. The SAFAR (System of Air Quality and Weather Forecasting And Research) app predicts deterioration in air quality from November 20 to 21 for Delhi from “poor” to the lower end of the “very poor” category.

This is where the challenge of controlling pollution persists, even after farm fires are over.