Diabetes is a major risk factor for disease severity, post-Covid complications; most deaths have occurred in the 51 to 60 age group, with a rise in fatalities among 31 to 40 as well. Since the advent of the pandemic last year, Chandigarh has witnessed at least 709 Covid-related deaths, as per the official figures till May 24— with as many as 392 people losing their lives to Covid-19 this year.

While the UT has been recording a slow and steady decline in cases since May 9, when the count of new positive cases had hit its peak at 895— the death rate is yet to decline. On May 24, the city recorded 245 new cases and seven Covid-related deaths.

While all age groups have been affected in the second wave, the number of deaths in 31 to 40 years category was 18 in 2020, and this year, the count already stands at 26. In the age group of 41 to 50 years, the tally of fatalities is 50 this year so far— three more than the total fatalities recorded in this age group in 2020. Meanwhile, diabetes, hypertension, acute respiratory infection, acute respiratory distress syndrome and chronic obstructive pulmonary disease (COPD) remain the main causes and co-morbidities associated with deaths in both the waves.

Professor Dr Digambar Behera, Head of Department of Pulmonary Medicine at PGIMER, reflects that as there has been a sudden surge in cases, the mortality has also gone up. “The new variants, including the double mutants with high rate of infectivity, resulted in the rapid spread of the disease, affecting a large population, including the young and children. While most recover, 10 to 15 per cent patients are moderately or severely infected, with five per cent very critical. As Covid-19 is primarily a lung disease, the involvement of lungs is very high, though other systems are also affected as the disease progresses,” explains Professor Behera. Patients with co-morbidities, he says, will in most cases have a more severe form of the disease, and the severity increases if the co-morbidity is more serious, consequently leading to fatalities. “People with COPD, asthma, respiratory issues and cancer, among other such conditions need to take extra precautions, as because of their low immunity they are more susceptible to Covid-19 of higher severity.” 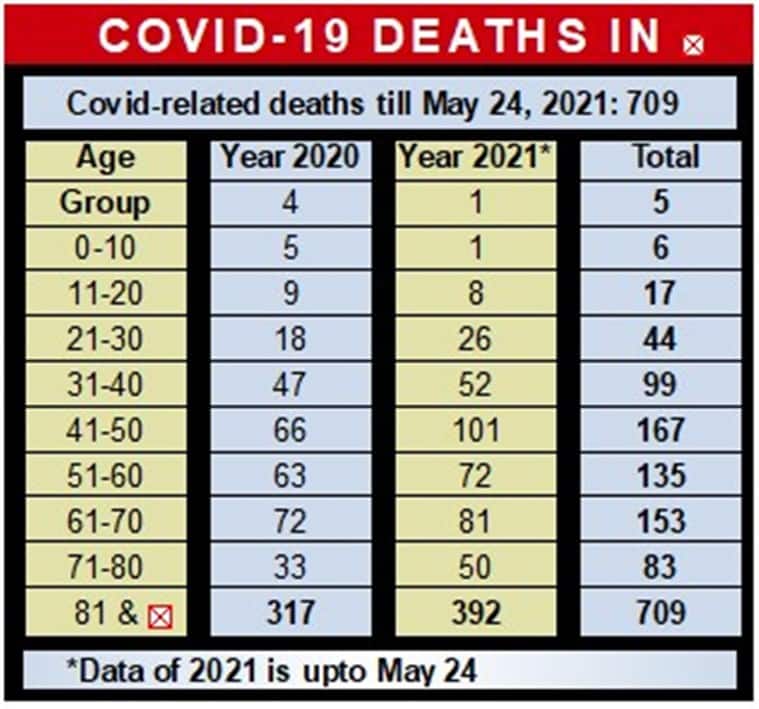 Dr Zafar Ahmed, Senior Consultant, Critical Care, Pulmonology and Chest at Fortis Hospital in Mohali, says patients are dying after prolonged illnesses as well as Covid-19 complications like infections, barotraumas, cardiac complications, among others. The causes of increased deaths also include progressive severity of illness. “This wave has proven to be aggressive and virulent.”

Dr Ahmed adds that the deaths may continue for some time after the peak is over. More so, due to the increased virulence of the strain. “With no lockdown initially, everyone was equally exposed to the virus. I am not sure if the proportion of women affected has more or less fatality as compared to men, but they have a higher risk of delayed diagnosis and treatment owing to our social structure.”

Covid-19 infection, he says, involves primarily the lungs. Much of the involvement is mainly due to the cytokine surge that follows the viral infection. Similar mechanism is also seen in other viral infections like H1N1 Ebola and SARS. “Hence, there is an emergence of lung disease in the wake of Covid-19 pandemic. Diabetes has been a major comorbid factor contributing to the negative outcome in pulmonary infections, including Covid pneumonias. Uncontrolled or worsened control of diabetes is commonly seen with the infection and with the treatment involving steroids. Simply stated, diabetes has not emerged, rather it has taken prominence as a major risk factor for disease severity, progression, treatment issues and post-Covid complications like infections especially fungal,” observes Dr Ahmed.

As the disease progresses, the fatalities are seen in the third or fourth week of an infection, says Dr Ramneek Bedi, Advisor, World Medical Association. That is why, says the doctor, it is important to impose a lockdown early rather than late. “If the total number of people getting infected rises, the total deaths will rise proportionately. We should see a downward trend in fatalities in another 10 days. Scientists are studying the new strain’s effect on pancreas directly rather than the initial hypothesis of steroids increasing the sugar levels.”