Sources said accused driver Piyush Thakur mentioned his residential address of Sector 51 at GMCH-32 but later corrected it to Sector 23. He will be arrested shortly. 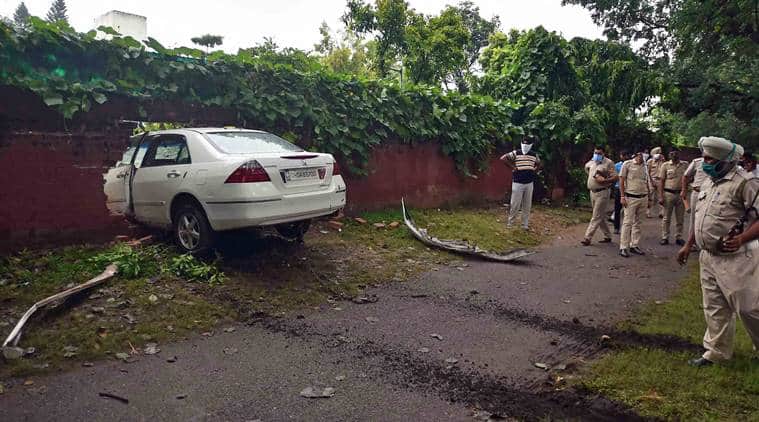 A speeding car hit a motorcycle, fell on the opposite side of the road and rammed into the rear boundary wall of the government house of an IAS officer of Punjab, Anirudh Tiwari, in Sector 19 on Saturday afternoon.

The incident occurred on the Sector 20/19 dividing road. The motorcyclist and car driver were injured. The two were rushed to GMCH-32. The accused driver was identified as Piyush Thakur, 31, a resident of Sector 23. The injured motorcyclist was identified as Pardeep Kumar Dass, a resident of Sector 28. A Sergeant with Indian Air Force, he was referred to Command Hospital from GMCH-32.

The car driver, Piyush Thakur, was going towards Sector 23 from Sector 20 when he hit the motorcyclist.

Police said subsequently, the car driver changed the direction of steering, came on the opposite road, jumped on cycle track and rammed his car into the boundary wall of the IAS officer’s house. Police said IAS Anirudh Tiwari was at the house of one of his neighbours, who is an IPS officer with Haryana Police. IAF Sergeant Dass was wearing a helmet.

Police said one of the passers-by and eyewitnesses, Mohammed Usman, informed the police control room. Sources said accused driver Piyush Thakur mentioned his residential address of Sector 51 at GMCH-32 but later corrected it to Sector 23. He will be arrested shortly.

The SHO of Sector 19 PS, Inspector Shadi Lal, along with other cops rushed to the spot. A police officer said, “Sequence of events is being established which led to the road accident. A forensic team inspected the spot. Though doctors did not smell alcohol from accused, his medical examination was done to ascertain the presence of intoxicants.” A case was registered at the Sector 19 police station. The damaged car and motorcycle were seized.