Punjab had hit the peak of new coronavirus cases in a single day on September 17 when 2896 new cases of infections were recorded. 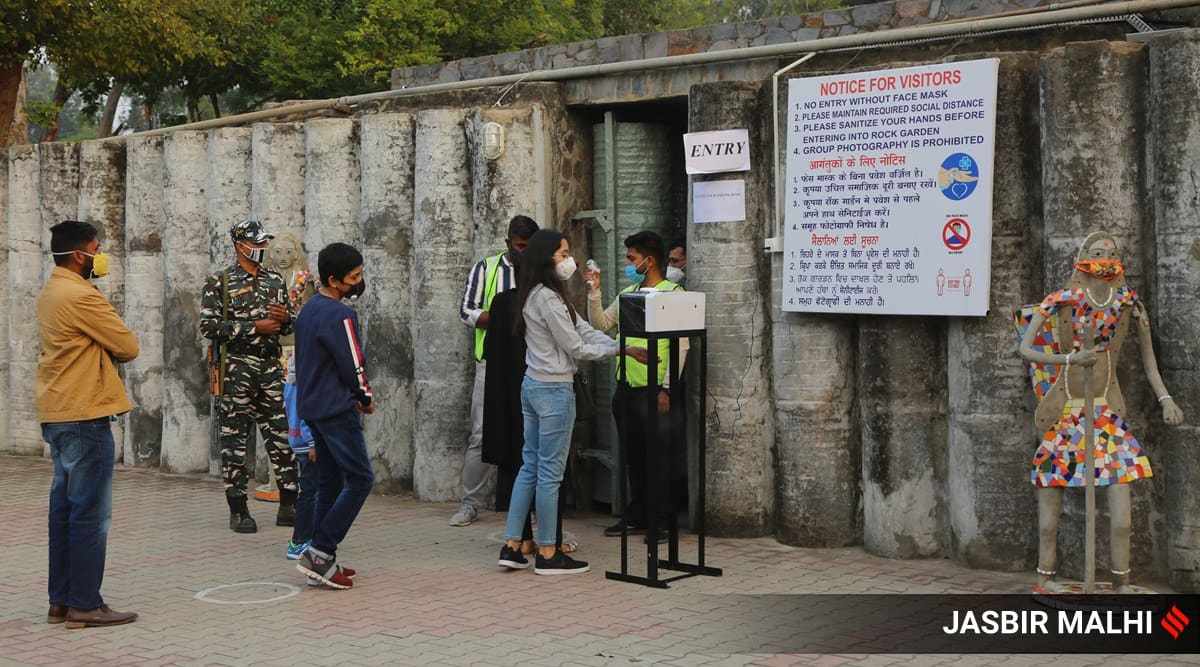 As new cases of Covid surge in Punjab this month threatening a second wave of infections, it emerges that the State soft pedalled to enforce guidelines in the State to check spread of the contagion after August and even in September which registered peak in new cases.

Official data accessed by The Indian Express reveals that as compared to a fine of Rs 8 crore Punjab police collected in August, it collected nearly Rs 5.2 crore fine in September against various violations, most predominant among them non-wearing of mask.

Punjab had hit the peak of new coronavirus cases in a single day on September 17 when 2896 new cases of infections were recorded.

In October, the month when there was consistent decrease in new cases, the amount of fine imposed on violators further came down to around Rs 2.7 crore. In this month so far, police have collected a fine of Rs 1.24 crore only even as health officials largely attribute the fresh surge in cases to people flouting guidelines on wearing masks, maintaining social distancing, avoiding gatherings and ensuring hand hygiene.

As cases increase, Punjab police has again decided to tighten the noose. It was learnt that Punjab Director General of Police Dinkar Gupta, while pointing out about the fresh surge on Wednesday issued directions to officers in the field across the State to intensify action against persons violating various directions relating to Covid Appropriate Behaviour which include compulsory wearing of masks, maintaining social distancing in hotels, restaurants, malls and shops and compliance in number limits at all social, religious and political gatherings.

The officials in Ludhiana, Jalandhar and Patiala were directed to focus more due to increasing positivity. DGP also directed for more sampling and testing of police force.

A senior Punjab police official said it was “multifarious nature of police duties” that led to decline in action against violators of Covid guidelines. For example, the official said, in situation like the ongoing farm agitation, the police has to do its duty. “Again, we are now tightening up the noose to fight Covid,” said the officer.

Punjab’s nodal officer for Covid-19 Dr Rajesh Bhaskar said, “The only reasons due to which cases rise are people not taking the required precautions to check the spread. This is the time to take it more seriously because whereever second wave has occurred, it has been all the more worse.”

The fine collected so far

Among the total fine till now, around Rs 36 lakh has been imposed for spitting in public place , Rs 30 lakh for not maintaining social distance, Rs 3 lakh for large public gatherings, Rs 7 lakh for violating home quarantine guidelines and Rs 84 lakh through challan of vehicles.