State Minister for Home Pradeepsinh Jadeja, too, said he would give Rs 25 lakh to Singarva health centre in Daskroi taluka of Ahmedabad from his MLA grants for purchasing equipment for fighting the infection. 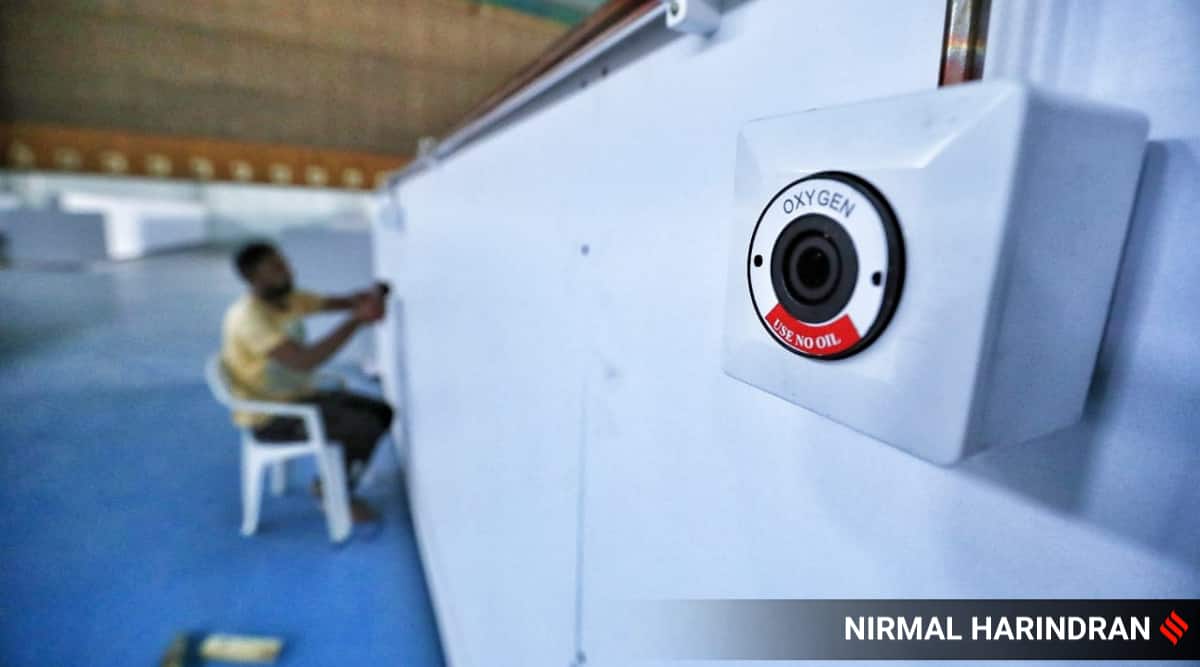 Bhupendra Patel, a BJP MLA from Ghatlodiya Assembly constituency, wrote to the district authorities last week to use Rs 25 lakh from his Local Area Development (LAD) fund for buying ECG machines, defibrillators and multipara monitors for Sola civil hospital, one of the government hospitals treating Covid-19 patients in Ahmedabad.

“I have little knowledge about medical equipment and so I donated money for these items after having discussions with the local doctors at the hospital. I wanted to do my bit in fighting Covid-19,” Patel told The Indian Express.

State Minister for Home Pradeepsinh Jadeja, too, said he would give Rs 25 lakh to Singarva health centre in Daskroi taluka of Ahmedabad from his MLA grants for purchasing equipment for fighting the infection.

A number of MLAs, across party lines, in Gujarat have come forward to provide LAD funds for fighting the infectious disease after the state government last week announced that it will allow MLAs in state to spend up to Rs 25 lakh more than the grants they currently can spend on civil hospitals, government dispensaries, hospitals operated by municipal corporations and municipalities and on medical equipment and appliances. Member of Legislative Assembly Local Area Development (MLALAD) is a scheme that enables each MLA to undertake small development works in his or her constituency.

Though Pankaj Desai, chief whip of the BJP in the Gujarat Assembly could not immediately provide a consolidated figure of MLAs from his party who have expressed willingness to provide their LAD funds for Covid-19 fight, he said, “Chief Minister Vijay Rupani recently announced that MLAs can spend up to Rs 30 lakh on Covid-19. This is a new provision. Now, we will see more participation from all the MLAs.”

Amit Chavda, of Gujarat Pradesh Congress Committee (GPCC), said, “So far, at least 30 of our MLAs have written to the state administration offering their LAD fund for the (Covid) purpose. While some have given around Rs 10 lakh, while some have given up to Rs 35 lakh.”

However, Chavda said the district officials lack clarity on how they will use these funds that MLAs are providing. “The government officials have little clarity on how and where they will use these funds. If I talk of my district, all our three MLAs had visited the district hospital and had given a letter for the usage of our grants to the district collector. When they did not process it, we contacted the doctors at the hospital to know what equipment they wanted. So, we gave the list of items required by the hospital to the collector and the same can be purchased from our grants,” Chavda said.

Chavda said he has given Rs 10 lakh to purchase 20 oxygen concentrators to the district hospital in Anand. “This can provide some help to those needing oxygen. I have also told the collector that I would want to give an additional Rs 10 lakh,” he added.

Similarly, Congress MLA Baldevji Thakor has given Rs 30 lakh for installing an oxygen plant in his Assembly constituency of Kalol. “The oxygen plant will cost more and we are trying to arrange the remaining amount from donors,” said Thakor.

“I don’t know if I was the first from Saurashtra to allocate funds from my LAD grant nor is it of any significance. The fact is that people are suffering and going through worst of times. Doctors are in short supply and in remote areas, like Rajula-Jafrabad, hospitals are few and far between. When the government, with all its powers and resources, is struggling to tackle the situation, an MLA like me will have very limited capacity to help people. But we must try and do whatever is possible. Therefore, I allocated Rs 10 lakh from the LAD grant. Secondly, with the help of Rs 25 lakh donation Morari Bapu (a noted storyteller) collected for Rajula, we have arranged around 200 cylinders of medical oxygen and supplying it to people free of cost,” Der, the first-time MLA, said.

He has also offered to bear all expenses if government sets up Covid care centres in 12 primary health centres (PHCs) in Rajula Assembly seat. “People are dying of Covid-19 but people of villages are also dying due to fear associated with going to faraway hospitals for treatment. Therefore, we have offered to arrange for oxygen, masks, meals, etc for patients,” Der said.

On April 30, Vimal Chudasama, the sitting Congress MLA from Somnath Assembly constituency, allocated Rs 25 lakh for setting up an oxygen plant at Alif Hospital, a hospital run by a charitable trust in Veraval town of Gir Somnath district. In his letter, addressed to the Chief Minister Vijay Rupani and marked to district planning officer, Chudasama underlined that the government-run district hospital in Junagadh had only 70 oxygen beds, which, he said, were insufficient during the current wave of Covid-19 and that another hospital with oxygen beds was needed. He submitted that Alif Hospital had committed to treat patients at token rates if supply of oxygen is ensured.

Similarly, BJP MLA from Surat East Arvind Rana, wrote letter to Surat district collector Dr Dhaval Patel, asking him to use Rs 25 lakh from his LAD grants for the year 2021-22. “In my letter, I have mentioned that the money should be used for purchasing oxygen machines or to purchase medical equipment to treat Covid-19 patients in NCH or SMIMER hospitals in Surat city. My grants should be used to save the lives of Covid patients,” said Rana.

Gujarat Assembly Speaker Rajendra Trivedi, who is MLA from Raopura constituency in Vadodara, on Monday, allocated Rs 25 lakhs from his MLA grant funds to SSG hospital in Vadodara for the purchase of Portable digital X-Ray machine with retrofit DR systems. The grant was allocated from funds of Financial Year 2021-22. Trivedi also wrote a letter to Chief Minister Vijay Rupani seeking clearance to allocate an additional grant of Rs 75 lakhs to SSG hospital for the fight against the ongoing Covid-19 pandemic.

And it is not just MLAs who have come forward to contribute. On April 29, Rajya Sabha MP Parshottam Rupala, who is a native of Amreli district, also allocated Rs 31 lakh each for setting up oxygen plants at district hospital Amreli and sub-district hospital in Rajula and Rs 37.59 lakh for purchasing ventilators.

“I have been in coordination with local administration officers as well as local leaders suggested that if some permanent arrangement of oxygen can be made, it will help in these critical times. Ventilator beds are in short supply and there is queue and officers said that if five more can be arranged, they would get some breathing period. I have decided to fund an oxygen plant in Rajula as it is quite far away from Amreli and not much healthcare facilities are available there,” the Union Minister of State for Panchayati Raj, Agriculture and Farmers Welfare told The Indian Express.

Rupala said while MPLAD was suspended for 2020-21, he has suggested works from grants which was carried forward from previous years.

BJP MP of Valsad district Dr K C Patel has also allotted Rs 17.58 lakh to purchase two oxygen tanks for the newly constructed New Cottage Covid Hospital at Vansad in Navsari district. The hospital is coming up with 100-bed oxygen-equipped facility to treat the Covid patient in the Vansda taluka of Navsari district.

“In the current situation, something should be done in the direction of setting up facilities in the hospitals located in the interiors of tribal districts. Out of Rs 2.50 crore MPLAD fund, I have allotted Rs 17.58 lakh to the newly constructed New Cottage hospital at Vansda. The tanks have already arrived in the 100-bed hospital. We have made arrangements to bring oxygen from a distributor at Palsana taluka in Surat district,” Patel said.

Mohan Kundariya, the sitting BJP MP from Rajkot was reportedly the first elected leader from Rajkot to allocate his LAD grant for Covid-19 treatment-related services when he wrote to the district planning officer of Rajkot on April 17 to purchase three ambulances each for Rajkot Municipal Corporation, Rajkot rural and Morbi district.

The MP said the nine ambulances are likely to cost around Rs 1 crore. His announcement had come when cases of Covid-19 were surging in Morbi district.