Pune Rural Police have arrested the proprietor of the factory, Nikunj Shah, on charges of culpable homicide. The chemical factory in Mulshi taluka, where a massive fire claimed the lives of 17 workers on Monday, used to store large quantities of various flammable chemicals without requisite permits, suggest findings of an inquiry committee probing the incident.

The fire was reported at the SVS Aqua Technologies, a company in Urawade, near Pirangut in Mulshi taluka of Pune district, around 3.30 pm on Monday.

The probe also found that the chemicals, including sanitisers, were stored in the same space where the factory employees worked.

Meanwhile, on Tuesday evening, Pune Rural Police arrested the proprietor of the factory, Nikunj Shah, on charges of culpable homicide.

An official who is part of the probe said the fire is suspected to have started in a packaging machine. It spread further and intensified due to stocks of flammable chemicals, including alcohol-based sanitiser, he said.

Police and local administration had earlier said that 18 persons were presumed dead in the fire. On Tuesday, officials clarified that 17 bodies and one body part were recovered. 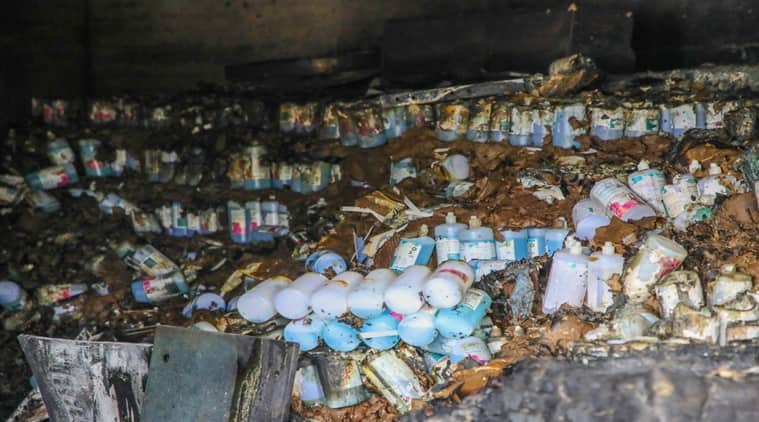 All the bodies were charred beyond recognition. DNA samples are being collected from the bodies and the next of kin to ascertain identities of the bodies.

District Collector Rajesh Deshmukh had on Monday instituted an inquiry committee headed by the sub-divisional magistrate, Maval, with officers from the fire, police and industrial safety departments, to determine the cause of the fire and if negligence led to the incident. The committee reportedly submitted its report to the district collector on Tuesday evening.

Superintendent of Pune Rural Police, Abhinav Deshmukh, said, “Based on the findings of the committee, the owner of the company, Nikunj Shah, has been booked for culpable homicide and he has been placed under arrest.”

An official, who is part of the inquiry committee, told The Indian Express, “The factory had a licence for production of chemicals used in water purification. Our primary findings suggest that they had also started repackaging of sanitisers. They were getting large containers of sanitisers and were filling them in smaller bottles, to be sold in markets. The factory did not have permits for this activity. Observations from Fire department experts suggest that the fire started due to sparking in a packaging machine and then it not just spread further, but also intensified due to the large stock of small sanitiser bottles.” “The fire-fighting equipment was inadequate. The enclosed spaces where the workers were killed were very poorly ventilated and this may have also caused deaths by suffocation. We also examined the response by the Fire Brigade. We found that the tenders reached within 22 minutes after receiving the call and fire-fighting operation was done as per the norms. Many electrical and fire-related clearances were not taken.”

Meanwhile, Minister of State for Labour in Government of Maharashtra, Bachchu Kadu, visited the factory on Tuesday afternoon. “Based on what the officials have told me, there was a clear violation of rules as factory management had started refilling and storing large quantities of sanitisers, for which they had no permit. It has also come to light that the construction of the factory building was not done as per the sanctioned plan. This criminal negligence on part of the owner has led to loss of precious lives,” said Kadu.

Additional Superintendent with Pune Rural Police, Vivek Patil, said, “We have launched a probe following the report by the inquiry committee. We will be probing each and every aspect including adequacy of fire-fighting mechanism, structural aspects and safety aspects, whether they had all the requisite permits, and if a fire audit was done. We have also come to know about a small fire at the same premises two weeks ago. We will check whether the factory management took any corrective measures after that.”

Deputy Chief Minister Ajit Pawar, who is also Guardian Minister for Pune, has announced an assistance of Rs 5 lakh for the families of those who died in the fire.