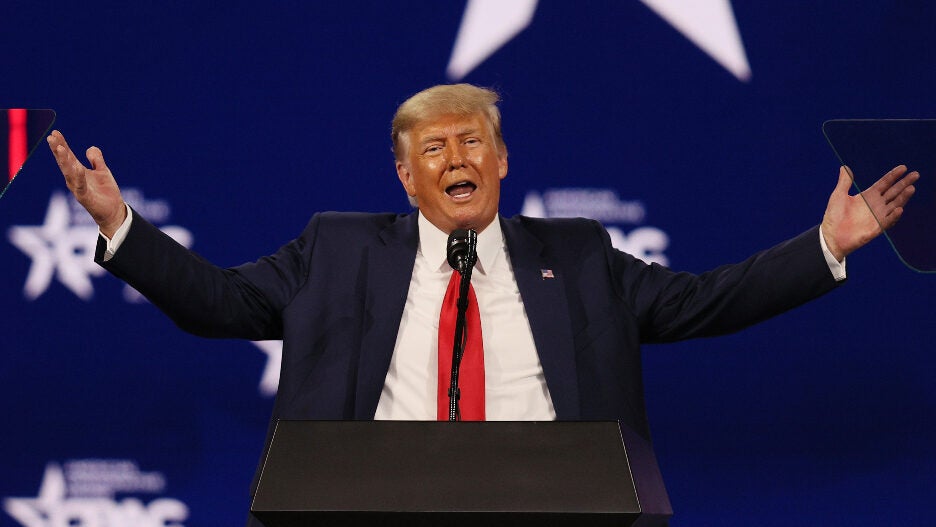 In an appearance on “The Clay Travis and Buck Sexton Show” — Fox’s replacement for Rush Limbaugh’s program — Trump said he thought there could be some truth behind Tucker’s seemingly madcap theories that the NSA is monitoring his communications at the request of President Biden.

During a June 28 episode of “Tucker Carlson Tonight” on Fox News, Tucker said he has been tracked by the NSA and also implied that other members of either the show or at Fox were being targeted.

Tucker said an anonymous leaker “repeated back to us information about a story that we are working on, that could have only come directly from my texts and emails; there’s no other possible source for that information, period,” Tucker said. “The NSA captured that information without our knowledge and did it for political reasons. The Biden administration is spying on us. We have confirmed that this morning.”

During his time on the show Trump also indulged Travis and Sexton in a conversation about how he was “targeted by the deep state.” Trump said that “all hell broke out” when he tried to have these claims investigated — although the Justice Department Inspector General Michael Horowitz determined in 2019 that there was “no political bias” tainting the FBI’s opening of the investigation into Trump’s affairs with Russia.

There’s a little more to this than just a right-wing president backing a host on one of his longtime favorite right-wing networks, though. If Trump is agreeing with Carlson that government agencies are spying on him that would make Trump somewhat involved, even though he is no longer president — since the person leading the NSA is a Trump appointee.

Trump himself is no stranger to weaponizing government agencies to obstruct Americans’ rights. After all, the former president was caught after directing the Justice Department to secretly seize and monitor communications and phone records of four Washington Post journalist reporting on Russia’s interference in the 2016 election. Trump also pressured his Justice Department to aid him in overturning the legitimate 2020 election results and, more laughably, asked the Department to make “SNL” quit spoofing him.

Trump picked Lt. Gen. Paul Nakasone to lead both the U.S. Army Cyber Command and the NSA in 2018 and Nakasone remains in the post today. A year before appointing Nakasone, Trump’s administration revised the classification of the Cyber Command division, making its leaders four-star generals and putting it on the same level as U.S. Central Command.

Nakasone is currently working with the Biden administration, which said last month it seeks to allocate more resources for Cyber Command and increase the force of roughly 6,200 people by 10%.