The ‘Mr. Steal Your Girl’ crooner is accused of beating up a woman and leaving scars a few days before a rape civil case against him was dismissed due to the expired statute of limitations.

AceShowbiz -Did Trey Songz cause trouble once more? The “Mr. Steal Your Girl” crooner allegedly beat up a woman in New York City only a few days before a rape civil case against him was dismissed due to the expired statute of limitations.

Late last month, a Twitter user who goes by the username @NickyyyBabyy posted, “Trey Songz beat up a woman at a bowling alley in NYC this week and somehow there’s no news outlets covering that incident.” Nicky then wondered, “He got all celebrity news outlets on his payroll or what?”

Then on Thursday, November 3, @reutheAGA replied to Nicki’s tweet, claiming that their friend was the victim. “This is true. She’s a friend of mine and STILL dealing with repercussions from this. The scars are still there,” so wrote @reutheAGA. 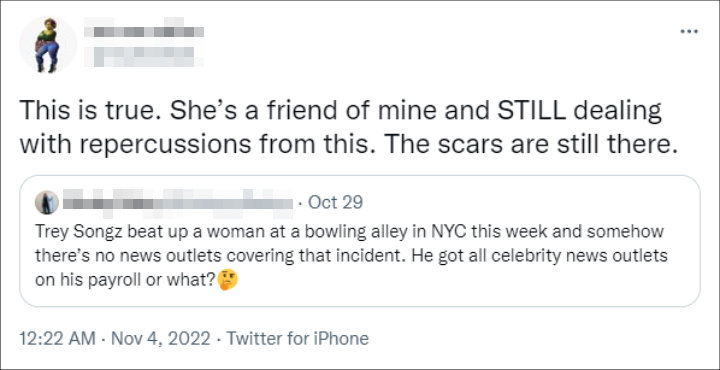 A Twitter user claimed that Trey Songz beat up their friend in NYC just days before a rape case against him was dismissed.

Upon learning of the claims, one social media user asked, “Did the girl press charges? how they going to post about a accident that they don’t no even happened.” Another replied, “was there proof or evidence to back your claim up?”

A third suggested, “That man has a serious problem,” while a fourth pointed out, “That’s terrible but you can see why it took so long to circulate tho.” Someone else noted, “100% believable. Keke already told y’all about him.”

Indeed, Keke Palmer once accused Trey, who was hit with numerous rape lawsuits in the past, of using “sexual intimidation” to get her in his “Pick Up the Phone” music video. “This is preposterous. How am I in this video Trey? After you found me in a closet HIDING because I was so afraid of anymore conflict. Literally my last option was to hide because you all would not listen when I said I did not want to be in the video the FIRST time,” she raged at that time alongside a screenshot of the visuals.

“Just cause you give someone food and alcohol and throw in a little sexual intimidation doesn’t mean they will buckle,” the “Nope” star continued. “Yet, you still disrespected me as a young women [sic], whom you’ve known since she was TWELVE. YOU STILL, defied my wishes and in turn, showed your lack of respect for a brand that took me fourteen years to build and put me in the video against my wishes. Come on bruh, I clearly said no and you said okay, yet I was being secretly filmed when you told me ‘let me just show you the idea’??”