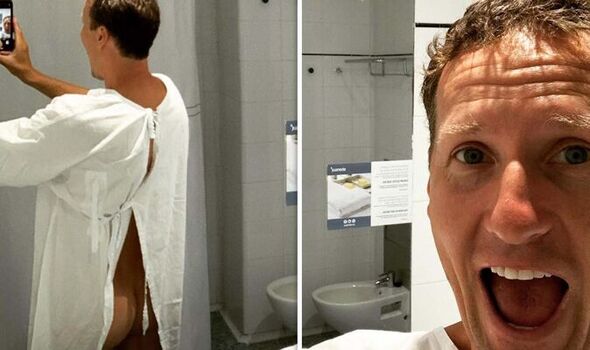 Former Strictly Come Dancing professional Brendan Cole, 46, informed fans that he will undergo a painful double hernia operation today. The dancer asked his followers to “wish him luck” as he spent some time alone before his surgery.

Nevertheless, Brendan seemed to be in good spirits as he shared a very cheeky snap of himself wearing his backless hospital gown.

He didn’t tie the gown up all the way which left his full behind on display.

“Feeling a little ‘all by myself’ but enjoying the alone time by taking this backside mirror selfie. Wish me luck!”

Brendan added an ice skate emoji, hinting that his hernia was caused from an injury sustained during his time on Dancing on Ice.

During his time on the ITV show, Brendan said he had taken a “big fall” during a training session with his professional partner, Vanessa Bauer.

In the coming weeks, he fell many more times and landed on the exact same spot, leaving him in a lot of pain.

He explained in March: “During our week 4’s training I had taken a big fall onto my left hip whist carrying Vanessa in a lift. I tried to walk it off but it has continued to be a pain ever since.

“Many weeks and many falls on the same spot later, on an early morning Saturday rehearsal for this number I had taken yet another fall landing on same left cheek.

“The knock had caused my entire buttock and hip region muscles to shut down and I couldn’t stand on my leg without it giving way.”

He received physio which lessened his symptoms but was still in “a lot of discomfort” and his leg was “constantly giving way”.

Earlier that month, Brendan shared a snap of his training injury as he lay on his stomach with an ice pack on his bum.

Sharing to his Instagram Story, the ballroom dancer wrote: “Rehabbing an ongoing injury that nearly stopped me skating on Sunday.

“Thanks to the incredible [physio] Sharon Morrison for keeping me and Vanessa Bauer on the Dancing On Ice rink despite me trying my hardest to injure my hip by falling on it so many times.”