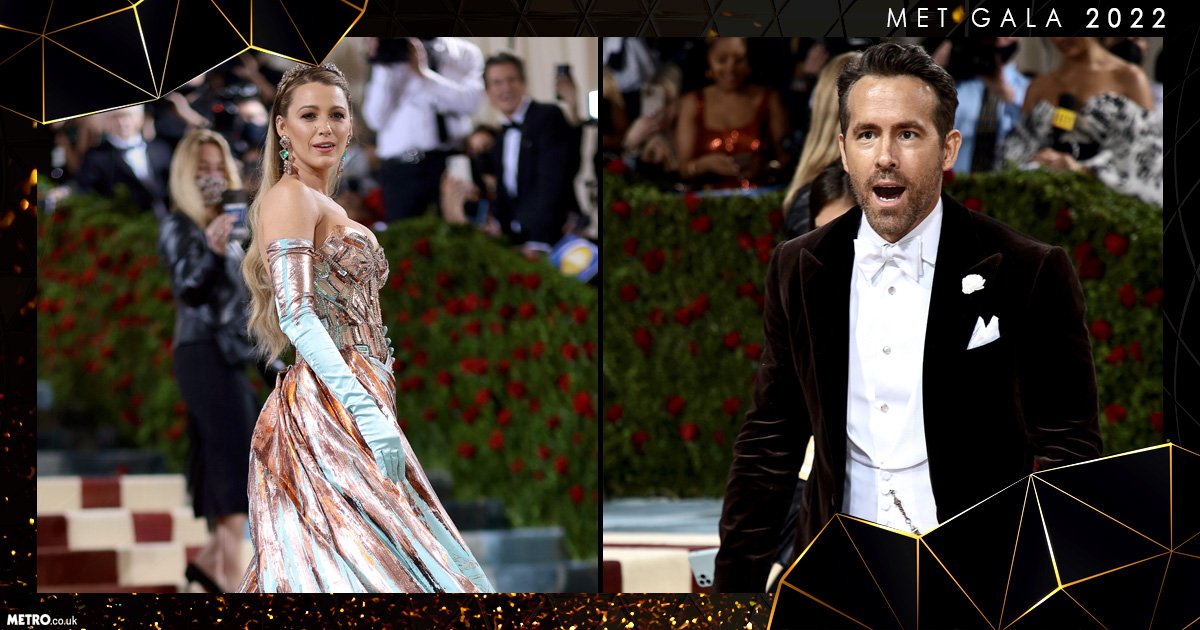 The Gossip Girl actress was joined by her husband as they arrived at the swankiest red carpet in the calendar, matching the theme of Gilded Glamor to perfection.

She looked incredible as she arrived at the bash, held in New York, in a colorful bejeweled gown dedicated to the state, complete with a pink and copper train.

But in true Met form, the 34-year-old decided to dazzle us a little more, with her bow transforming into a second, light blue train – with her previously pink gloves also turning blue.

Deadpool actor Ryan, who donned a black tuxedo, had already made it up the stairs and had the perfect viewing spot to watch the switch take place.

In a video taken from the exclusive bash, he could be seen grinning as the A Simple Favor star had her moment in the spotlight.

Blake and Ryan were among the first stars to grace this year’s ceremony, held at the Metropolitan Museum of Art, and are serving as co-chairs.

They are joined by Regina King and Lin-Manuel Miranda in the position of hosts.

The Met Gala is organized annually by Vogue and traditionally marks the beginning of the Costume Institute’s fashion exhibit, with some of the biggest names in Hollywood and beyond expected to join.

Tommy Dorfman, Tom Ford, Paapa Essiedu and Austin Butler are just a few of the celebrities who have arrived so far.

Kim Kardashian is thought to be putting in her annual appearance, with speculation over whether she will have boyfriend Pete Davidson on her arm.

Ryan and Blake recently made headlines when they vowed to match donations made to the United Nations amid Russia’s invasion of Ukraine – a move which many around the world applauded.

During an appearance on the One Show in March, the superhero star explained the decision behind his appeal.

‘I do have empathy, as does my wife, for folks that have been displaced and pushed out of their homes or forced to leave not just their homes or countries on a moment’s notice.’

‘I can’t imagine what that torment is like. This organization helps refugees all over the world, not just Ukraine, but yeah a lot going on right now and we’re lucky that we’re able to help.’