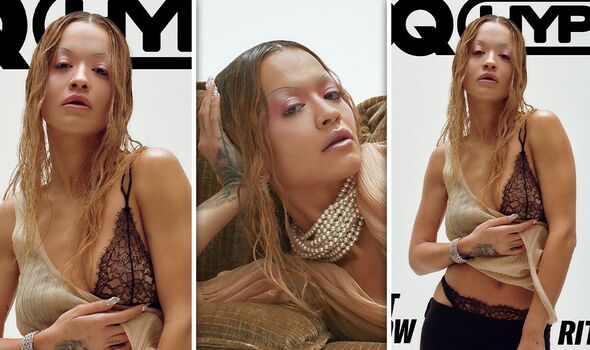 Rita Ora set pulses racing in her latest racy photoshoot for the cover of GQ Hype.

Rita Ora, 32, posed up a storm for the latest GQ Hype cover. The singer modelled bleached brows and wet-look hair while wearing a cream ribbed top and a low-rise skirt.

Her top fell from one shoulder which exposed her lacy black bra and impressively toned physique.

In the interview, Rita opened up about how she new husband Taika Waititi.

Following their August wedding, Rita said: “We were really good friends for six years, and I went to Australia and we both had separate jobs…It was nice to see a familiar face and our universes just collided. That was it.”

She also said that her Masked Singer  co-stars Davina McCall, Jonathan Ross and Mo Gilligan are like “family”.

Rita Ora wowed in a cream silk dress and pearls

Rita Ora lounged on a tan sofa for the racy photoshoot which also saw her model some dramatically thinner eyebrows and wet hair.

Rita Ora wore a ribbed cream vest which fell from one shoulder to bare her black, lace bra. The singer also wore a low-rise black skirt which exposed her underwear.

Rita Ora bared all in her sheer purple dress as she went braless to a Golden Globes event in Los Angeles on January 8.

Rita Ora opened up to GQ Hype about how she knew Taika Waititi was the one. She said: “We were really good friends for six years, and I went to Australia…It was nice to see a familiar face and our universes just collided. That was it.”

Rita Ora has been making headlines with her racy ensembles

Rita Ora put on a jaw-dropping display at The Fashion Awards 2022 in just red lingerie with a see-through mesh skirt.

Rita Ora bared all in the red hot outfit

Rita Ora posed up a storm on the red carpet as she showed off her fabulous figure in the sheer ensemble.

Speaking about The Masked Singer, Rita told GQ: “I thought it was a fun, easy breezy [job], and it felt like a good idea to sit alongside Jonathan [Ross] who I’ve loved since day one, Davina [McCall] who’s my TV icon, and Mo [Gilligan] who I met during the show.

“It makes your job so much easier when you love the people around you. I don’t want to walk away from that family right now, but you never know what’s going to happen.”