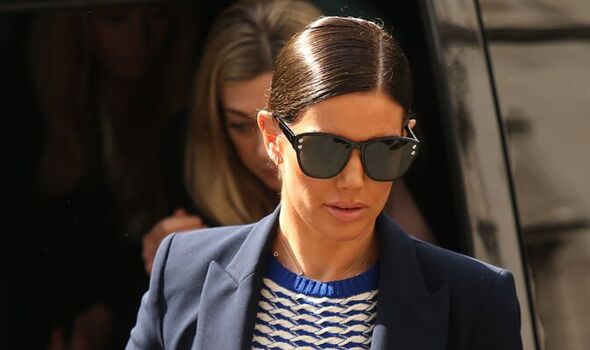 David Sherborne, for Rooney, had been questioning Vardy, 40, about one of the fake posts Rooney posted on her private Instagram account as part of her Wagatha Christie sting. Mr Sherborne misspoke and said it was Vardy who had “gone to Mexico to look at gender selection,” to which the model responded: “It wasn’t me who went to Mexico, it was Mrs Rooney.”

The lawyer said: “Is that your best point?”

Vardy’s lawyer Hugh Tomlinson QC then stood up and said: “Mr Sherborne keeps making remarks and if the witness is in the box for a long time it can be unpleasant.”

Mrs Justice Steyn, who is hearing the trial, said: “It is unnecessary.”

She added the court did “not have time” for the remarks and cross-examination resumed for a few seconds before she asked Vardy if she wanted a break.

Vardy nodded and grabbed a handful of tissues before leaving the courtroom at Royal Courts of Justice for several minutes.

The courtroom had earlier burst into laughter over Vardy’s response to a question about her agent’s phone falling into the North Sea.

The model, who is married to Leicester City striker Jamie, was asked by Mr Sherborne about an article in The Sun by Simon Boyle wgich referenced a picture of Wayne and his children on Coleen’s private Instagram.

The court previously heard Vardy’s agent Caroline Watt was unable to supply her messages between herself, Mr Boyle and another reporter Andy Halls.

This was because her phone had “fallen into the North Sea during a boat trip”.

Mr Sherborne asked Vardy: “That article refers explicitly to a post on Mrs Rooney’s Instagram account doesn’t it? I put it to you that that came from you through Ms Watt to Mr Boyle.

Vardy said: “No, absolutely not.”

Making reference to the phone falling overboard, the lawyer continued: “The shame is Mrs Vardy, that Mr Boyle’s Whatsapp messages with Mrs Watt, just as with Mr Halls, are lying at the bottom of the sea in Davy Jones’ locker.”

Vardy responded: “Who is Davy Jones?”

As journalists and members of the public chuckled, Mrs Steyn told Vardy: “It just means at the bottom of the sea.”

The court heard Rooney was “very upset” about the article and posted on her private Instagram account saying: “The grass strikes again.”

Vardy then messaged Rooney describing someone who would leak stories as “d***heads” and said “The Sun of all people”, adding: “Hope you are OK”.

Mr Sherborne said Vardy was “fishing” when she went on to ask Rooney: “Have you been through all your followers? No one with any celeb magazine links? What about being hacked?”

“You know perfectly well you have been responsible through Ms Watt,  as we see through a number of these posts, to pass information to The Sun.

“Yet you are passing yourself to her as someone who hates The Sun, coming up with excuses like ‘maybe you have been hacked, maybe someone with celeb links’.”

Vardy denies the allegations and is suing Rooney for libel.