Being a public personality, you are always under scrutiny as people are keen observers and one wrong move, you are done in for. And now to face this scrutiny is Priyanka Chopra’s beau Nick Jonas. The American singer recently shot for a cigar magazine called Cigar Aficionado. While the actor-singer is elated to be the first person under age 30 to feature on the cover of a magazine, his fans are not happy with the actor promoting the use of it.

Nick shared some pictures from the cover shoot along with the cover of the magazine issue. Nick wrote: “First person under 30 to hold a cigar on the cover of one of my favorite magazines. So pumped about this one! Thank you@CigarAficMag! Issue on newsstands September 24th.” This apparently, didn’t sit well with few of his followers and they took a dig at the singer saying how could he promote such thing while hisPriyanka Chopra was asthmatic. Interestingly Priyanka commented on his picture calling him “yummy” husband. Have a look at Nick’s post here: 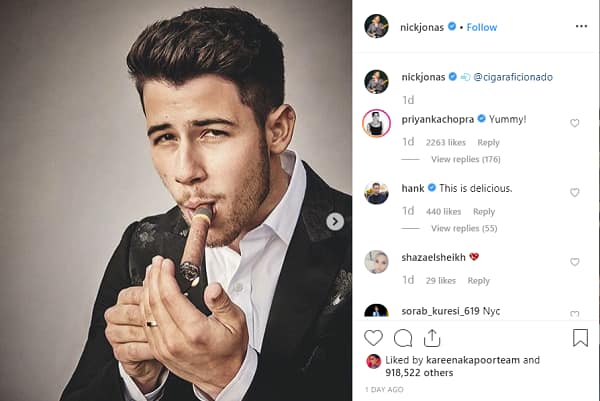 One of the Twitter users wrote, “Your wife has Asthama. I hope you’re thoughtful enough to not smoke when she’s around.” While other wrote, Aise toh iski biwi marr jayegi ??” Another took a jibe at Priyanka as well, he wrote, “You’re wife have asthma, she had the audacity to tell 80 million people not to burn firecrackers for celebration while at her own wedding she burned tons and also her own husband smoke cigars size of her lips….” Have a look at some of the tweets here:

Anyway, what are your thoughts about the same? Let us know by tweeting to us @bollywood_life. For more scoops and updates from the world of entertainment, watch out for this space.