During the lockdown, every day, Heena and Harsh Mandavia risked their lives to tirelessly cook and provide free meals to the poor and needy.
What made them do it for more than a year?
An inspiring story that will reinstate your belief in the power of humanity.

On May 7, 2020, two months after the nation-wide lockdown was announced, Harsh Mandavia, who operates a small tiffin service in Kandivali, north west Mumbai, got a call from Abhinav Chaudhry, a customer who wanted to donate food to the needy.

‘I want to feed 100 people who are unable to earn daily wages due to the lockdown. Can you do it for me?’ Abhinav requested Harsh, who operates Harsh Thali And Parathas — Mom Makes Son Sells, a delivery kitchen along with his mother Heena Mandavia.

Although they were apprehensive about their own safety, Harsh and his mother agreed to take it up.

The following day, both mother and son neatly cooked and packed the food in their 250 sq ft kitchen.

With permission from the authorities and help from locals, they were able to feed over 100 people at a nearby gurdwara.

“These were people who were either poor, unemployed and couldn’t go back home,” Harsh recalls about that first donation drive.

The same evening, Harsh put up an appreciation post for the donor and shared pictures on social media that went viral in no time.

“In two days, we received more than Rs 11,000 so we could continue feeding people for the next few days,” says Harsh who worked as a delivery boy since he was 6 and has been instrumental in helping his mother sustain their delivery kitchen for over two decades.

“Every day, the queue of people (waiting to be fed) kept increasing,” says the young entrepreneur who raise Rs 17 lakh (Rs 1.7 million) from donors across 11 countries in the past year.

After the second wave hit India in April, Harsh was advised by his mother and relatives not to step out and risk his life.

‘You and your mom have already done enough last year. Don’t risk your life. Even young people are dying,’ he was told.

But Harsh remembered the time his father passed away in an accident and how people helped them start their business from scratch.

“I was five when I lost my father. We had no income. It’s because of a few good people who helped us, my mother and I could set up our first kitchen and survive; I could get a good education and we are here.” he recounts.

“Today, when someone requests ‘ek aur packet de do. Raat ko bhi isi se kaam chalana hai. I think of the times when mom used to feed me two meals and survive on biscuits,” he says remembering the days of struggle and how his mother raised him independently.

In April, when Harsh posted pictures from his donation drive, he was able to raise Rs 150,000 within two days.

“That’s when I realised the power of good deeds,” he says. “If a single post can help so many donors come forward and help others, why not continue doing this?”

“I could have easily sat at home and saved my life or despite taking all precautions, succumb to Covid. But each day, when I step out to do something for others, I can only be glad I am able to make some difference.” 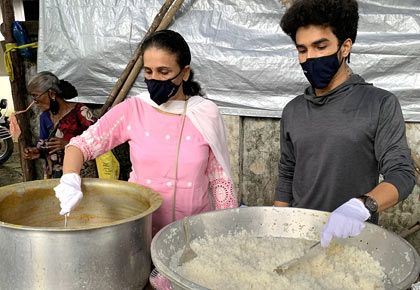