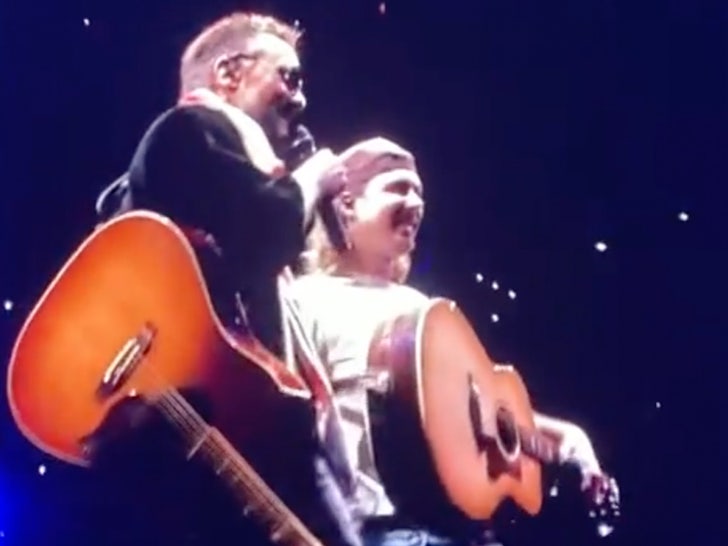 Morgan Wallen is a bro, so it’s no shock he got a wild reception onstage Saturday night in the City of Brotherly Love.

Wallen was a surprise guest during the Eric Church concert. Wallen walked on stage and told the capacity crowd, “What’s going on, Philadelphia?!!?”

Church had been singing Wallen’s song, “Sand in My Boots,” when Wallen walked out to roaring applause and cheering,

The duo then sang more of Wallen’s songs, including “Whiskey Glasses,” “Somebody’s Problem,” “Silverado for Sale,” and “Quittin’ Time.”

It’s an interesting pairing. Wallen has long called Church his musical hero — and Chruch even offered words of encouragement after Wallen dropped the n-word after a night of partying.

Church said at the time, “That was indefensible … I was heartbroken when it happened.  I think Morgan’s trying to work on that and on himself. And I hope he does.” Wallen dropped out of sight for several months to deal with it.

Wallen is getting ready for 4 shows this fall … 2 in Alabama, one in Georgia and another in Tennessee.

As you know … Wallen was frozen out of country radio, concert venues and awards ceremonies after the scandal, but his record sales actually increased.