Kourtney Kardashian made a bold (and slightly naughty) statement on her boyfriend Travis Barker’s latest Instagram snapshot of the happy couple together.

Kourtney Kardashian, 42, has no problem letting everyone know just how attracted she is to boyfriend Travis Barker, 45. After the couple enjoyed yet another PDA-filled date night, which the Blink-182 drummer documented on Instagram on Monday, July 12, Kourtney left quite the risqué comment on her beau’s post. In the photos, both stars donned matching sparkly fang teeth while holding hands and walking through a hallway together. Kourtney was dressed in a silver plunging top and a black mini skirt, while Travis wore a white tank top and black pants.

Travis captioned his post with two vampire emojis — which led Kourtney to respond on the post with a vampire-themed racy comment . “I want to suck your blood,” the Keeping Up with the Kardashians star told her boyfriend. And Travis kept the naughty interaction going with a simple response to the POOSH founder: “My favorite,” he said.

The couple enjoyed a romantic weekend in Las Vegas while attending the UFC 264 fight on Saturday. They were introduced by the announcer at the T-Mobile Arena and decided to engage in a very intimate kiss that was filmed. Kourtney was laughing during the entire steamy makeout session, as was Travis. They were later spotted holding hands while walking out of the venue to head home from their idyllic night out.

Kourtney and Travis were previously in attendance for UFC 260, also in Las Vegas, NV on Mar. 27. Travis, who is a longtime UFC fan, has regularly attended their events for years. He and Kourtney were ultra cozy in their own area at the fight alongside pals Megan Fox, 35, and Machine Gun Kelly, 31, for what appeared to be the first of several double dates between the four stars. 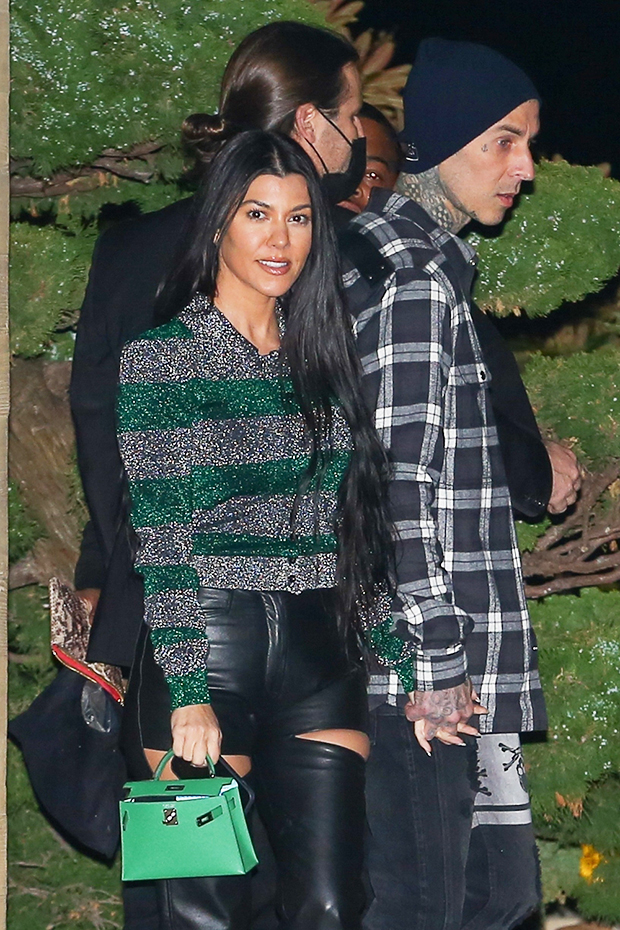 Travis and Kourtney’s relationship has been going strong since they went public with the romance at the beginning of 2021. As fans know, the couple has not been shy about showing off their love for one another, both on social media, and with their PDA-filled outings. They’ve also enjoyed some special vacations together with their children. (Kourtney shares daughter Penelope Disick, 9, and sons Mason Disick, 11, and Reign Disick, 6, with ex Scott Disick, while Travis has a son, Landon Barker, 17, and a daughter, Alabama Barker, 15, with ex-wife Shanna Moakler).