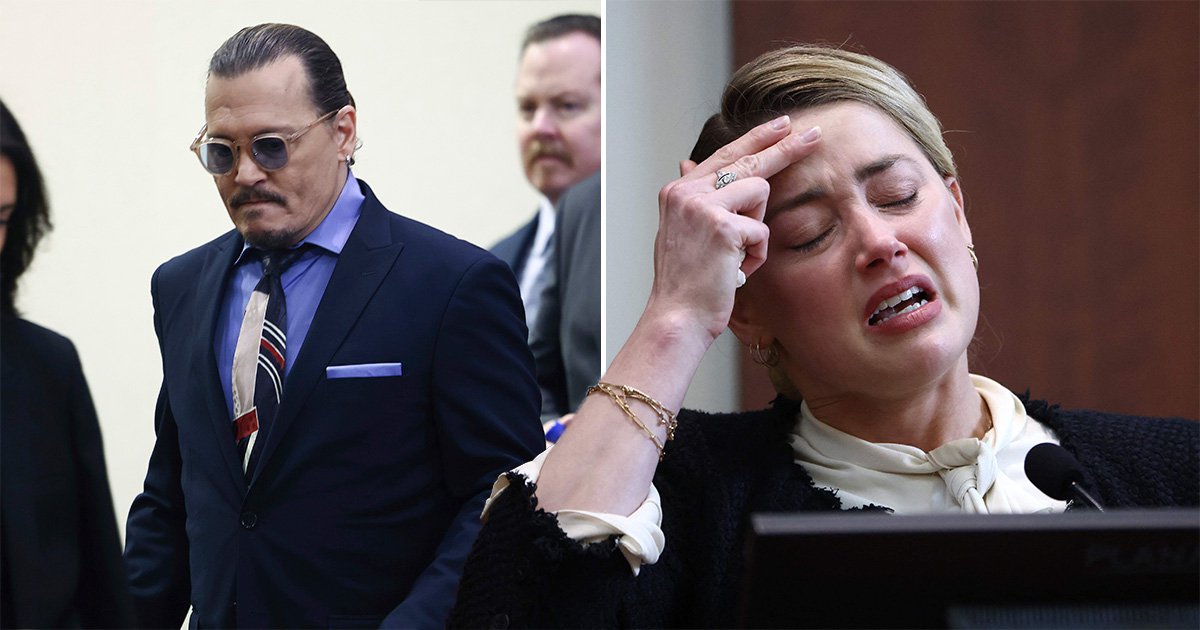 Johnny Depp’s team has claimed that a photo of Amber Heard sporting a bloodied lip are ‘fake’, despite a ‘mix-up’ in dates.

The Pirates of the Caribbean actor is suing his ex-wife for defamation, with the bombshell trial currently on a break and set to continue next week.

The Aquaman actress’ team previously tried to submit a picture showing her with an injured lip and a note thought to be written by the 58-year-old – but after objections from the plaintiff, the judge agreed that it was not offered up in time, meaning it has not been included.

It has now been suggested that the picture is from 2012, a year after she said the first violent incident took place in the UK defamation case, which Depp lost.

According to TMZ, who obtained the photo, his team said this doesn’t follow the timeline of her allegations – and the metadata reportedly confirms that it was taken in 2012.

A source close to Heard told the outlet that she had a mix-up in her dates for the UK case, with her therapist records reportedly showing that the alleged abuse stemmed from 2012.

‘The panicked Depp’s team is fighting tooth and nail to prevent compelling evidence of abuse and photos such as this from being introduced,’ a spokesperson for Heard told Metro.co.uk of the claims.

‘They continue their losing strategy: distract the jury and demonize the defendant.’

Appearing on the stand at the Fairfax County Courthouse last week, the 36-year-old told the court of the moment she was allegedly attacked by her ex-husband.

‘I was in one of these fights. I believe it’s this one, in his downtown ECB, we call it, loft, and we’re in the kitchen living room area and he backhands me,’ she said.

‘He wears a lot of rings. I remember just feeling like my lip went into my teeth, and it got a little blood on the wall.

To view this video please enable JavaScript, and consider upgrading to a webbrowser thatsupports HTML5video

‘Just that simple, a little bit of blood on the wall.’

Depp is seeking $50million (£39m) in damages in the libel case after Heard penned an op-ed in 2018, discussing being a victim of domestic abuse.

Despite not being named in the Washington Post piece, his team argued that it implies she was physically and sexually abused by him during their marriage – something he has denied.

His former partner is countersuing for $100million (£81m), claiming that he libeled her by calling her a liar.

As court proceedings went on a one-week break, following Heard’s emotional testimony that Depp penetrated her with a bottle during a row, his spokesperson slammed her ‘performance’ in a statement.

‘As Mr Depp’s counsel correctly predicted in their opening statements last month, Ms Heard did indeed deliver “the performance of her life” in her direct examination,’ they said.

‘While Ms Heard’s stories have continued to grow new and convenient details, Mr Depp’s recollections have remained exactly the same throughout the six painful years since her first allegations were made.

‘His truth – the truth – is the same no matter the environment in which it has been presented.’

‘The upcoming cross examination from Mr Depp’s team will be most telling, and will certainly highlight the many fallacies Ms Heard has now attempted to pass off as fact throughout her convoluted testimony.’

To which Heard’s spokesperson responded: ‘As evidenced by the statement just released, Mr Depp’s defamation claim is falling apart so rapidly that his counsel are turning from prosecutor to persecutor.

‘They boast that Mr Depp’s story has not changed. If so, since he lost the Domestic Violence Restraining Order and he resoundingly lost the libel case in the UK, perhaps he should consider a new strategy rather than the recycled approach of attacking the victim, and refusing to take responsibility for his own conduct.

‘Mr Depp’s behavior in this trial has been as pitiful as it was in their marriage.

‘Apparently, they feel they must double-down on their demonstrably losing two-part strategy: distract the jury and demonize the victim.’

Metro.co.uk has contacted Amber Heard’s reps for a comment.

If you’ve got a celebrity story, video or pictures get in touch with the Metro.co.uk entertainment team by emailing us celebti[email protected], calling 020 3615 2145 or by visiting our Submit Stuff page – we’d love to hear from you.